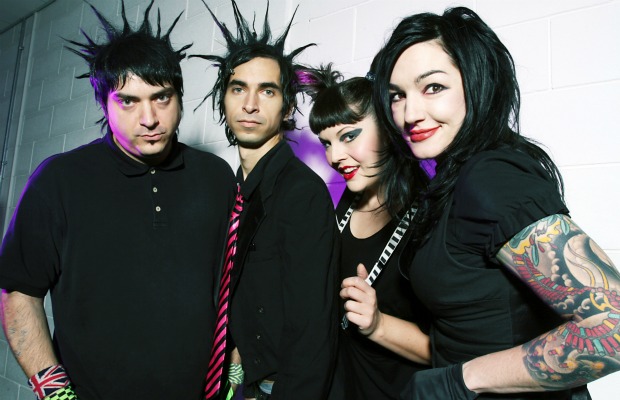 FRANKENSTEIN GIRLS KICKING ZOMBIES AND VAMPIRES IN THE CROTCH REPEATEDLY: The return of MINDLESS SELF INDULGENCE

After a decade of service, the band members took some time off from the rock treadmill in 2009 to spawn, travel and write music. But in the two years that MSI have been gone, it seems the world has caught up with them: You can draw a line between the jittery, twitching programming styles of such records as 1999’s Tight (reissued by The End earlier this year as Tighter, with more bells, whistles, bonus tracks, baby pacifiers and glow sticks than ever before) and 2000’s Frankenstein Girls Will Seem Strangely Sexy to the burgeoning dubstep movement (even though the members of MSI dress better and tell funnier jokes than your typical Electric Daisy Carnival attendee).

Jason Pettigrew chatted with Urine about what he did on his extended vacation, how the rest of the world has finally caught up with MSI’s patented twitchy, ADD-addled electro-epilepsy, Righ’s transformation for My Chemical Romance and what kind of uniform he wants his fans to wear at these upcoming gigs.

How long has this reconvening been in the works?
JIMMY URINE: It’s been in the works about since my birthday, I’d say, since September-ish. It was around then that we were like, “Let’s check shit out and drop a bomb on everybody.” We always planned to go out, but the actual “Alright, let’s do this” decision was around September. We feel like we want to go back and have some fun. We had planned to take a break and then go back out. It’s not like we hit a brick wall or somebody had died. We’re people; we wanted to take a break, start some families, check out some other ventures and have some fun.

How have you been entertaining yourself for the past two years?
I actually do a lot of stuff. My wife Chantal [Claret] did a piece for a website that was pictures of us in the last year. I was looking at them and I was like, “Holy shit, we do a lot of stuff.” That’s part of it, and [I’ve also been] doing some music stuff here and there; I’ve got some stuff that’s coming in the future that I will probably talk about in a couple months or next year, which is only like a month away. Some small side things that came up that were fun. Some DJs on Dim Mak called Mustard Pimps were big fans of Mindless, so they called me up to do a track. I got to get drunk in my basement and scream about a bunch of shit and they cut it up and it turned out really great. It’s called “Money Shot.” The video’s amazing: It’s all this chopped-up animation of George Washington off of a dollar bill getting all hedonistic and having fun. Little things like that pop up for me, and it’s fun, just traveling around, having a good time.

The other thing that’s strange about being in a band like Mindless Self Indulgence: When people who are in big successful bands make their side projects, their side projects are super-fucking weird. Being in a super-fucking weird band already, anytime someone’s like “Want to come write a song for some pop girl?” I’m like, “Okay, fuck it. I think I can do that, I’ll just replace all my ‘fucks’ with ‘love’ and see how it flies.” The funny thing is, right before we went on our break, everything was still in a Daughtry world—very boring stuff. But in the last three years, a lot of music sounds very Mindless: very ADD [and] computer-y, and a lot of the rap stuff sounds a lot more like the Left Rights [Urine’s side-project with MSI guitarist/instigator Steve, Righ?] If you just replace the fucking “Dougie” with “Doogy,” you pretty much have a Left Rights song. People are being ill again, which I like. There’s definitely a sense of “Let’s get stupid” in a cool sort of “Humpty Dance”-type of way.

Then there’s the d-word—dubstep—where a lot of the programming style is very jittery, similar to what MSI have done in the past.
That’s very fidgety and has a lot of cut-ups, which reminds me of a lot of Mindless stuff. Right before I die, [MSI detractors] are going to be like, “Wait, he was a genius! We thought he was a fool!” [Laughs.] Now there are a lot of people coming out of the woodwork, like anytime I meet someone, they’re like, “Oh my God, I grew up listening to your music, and now I’m a millionaire.” Great, lend me five bucks and take me out to dinner. Really, the cool thing is these are people who went to shows, like, “I was a 13-year-old kid, and now I work at this crazy thing and think you’re the bomb.” It’s really cool.

I don’t know if you trolled the Mindless boards or anyplace else online in the last two years. Did you get the vibe that there was still a demand for MSI?
Yeah, there was very much a desire for us to tour. We have a very good show, and we created a band that has lasting power. I think no matter how much anybody thinks it’s in excess, when you’re into crazy cult movies, crazy cult bands, crazy cult books and crazy cult artists, you’re probably going to have a crazy fucking cult band, no matter how you slice it. You can try and make it Duran Duran as much as you want—it’s going to end up Mindless Self Indulgence. I think that really helped us have a band people want to see again and again. Pick a random band like GWAR or the Cramps: When you go to a GWAR show you want to see GWAR, and you really can’t get that anywhere else. Now you don’t even need to troll random boards, you can just turn on Facebook and Twitter and every other [tweet] besides being “You guys are really cool” is “When are you touring again?” [This tour] wasn’t like, “Oh, this is overwhelming pressure.” It was like, “Oh, they still want to see it. Alright, cool, we’ll do it again. I don’t give a shit.”

Was that the deciding factor? Let’s go further back to the last week of the touring behind your last album, If. Had the band members gotten to the point of, “I’m just so tired and if I have to be on a bus another week with you…”
No, we never got like that; we love each other and we do enjoy doing the shows a lot. It’s just a coincidence that it’s incredibly entertaining for you people, because we try to make it entertaining for ourselves. If I was in a Daughtry band, I could completely understand those guys [wanting to consider using] heroin or taking pills or becoming an alcoholic, because that shit’s boring. With our live show, I’m trying to entertain Steve, entertain myself, entertain Kitty—and vice versa. So we got to the end of that record cycle, and everyone was literally starting, like, boom! We’re going to have babies as soon as the road stops. In fact, Lyn Z got off the road, like, I think a month or two before those last couple shows.

When are you and Chantal starting a family?
Soon, but the part that’s great is trying, ’cause I get to stick it in, then take it out again, then stick it in again. So that’s the best part, I’m practicing right now, I want to get in shape. But soon; [I’m going to] see how this next year or two goes.

So this tour is nothing more but a war chest for you to buy diapers.
It’s a diaper war chest. No, I definitely want to do another Mindless record. I’ve got some other stuff in the works I can’t talk about right now. I think everyone in unison will just be like, “Oh, snap.” Then I also want to do another Mindless record of some caliber. I need to figure out how I want it to sound and what I want to do with it. But believe me, it’s not like I’ve been sitting here for three years. Whenever I write something, it either goes in one pile to someone else, or I’m like, “Oh, that’s a Mindless song,” and put in another pile. There are a lot of piles around my house.

Do you think the world has caught up with Mindless Self Indulgence?
I think they’ve definitely caught up. The one thing that [today’s bands] did do, was they took elements [and] applied those elements in a much more pop or focused manner. I’m too out of focus; I like too many things to commit. I think when you do commit to one thing—even if you tweak it slightly—it becomes a lot bigger. Like, “We are a rap act, and this is a rap thing, and I’m a rap act, and I’m going to do it a little skewed slightly.” Oh, you’re Odd Future. Or, “I’m a dance guy and I’m going to do some dance stuff, but I’m going to do some fidgety, fucked-up shit in there.” Okay, you’re Skrillex. But those guys are not 16 things all combined at once going, “Hey, we’re 16 things all combined at once, good luck figuring us the fuck out because we’re going to fucking do it like this.” Which I think is the one thing that makes us completely different than everybody else.

The funny thing is when we were first got signed back in ’99, the main thing people—whether they were an A&R guy or whether they were an act we were opening for—they were like, “You guys are 10 years ahead of your time.” Whether it was a good thing or a bad thing. “Sorry I couldn’t make or break this record, you guys are 10 years ahead of your time.” Now it’s 10 years later, I think we’re pretty much on schedule. Now that we’ve had that break, the world has caught up a little in certain aspects. [There are fans] being like, “Hey, you guys were really cool, I was just a crazy motherfucker who listened to crazy music and I listened to your crazy record a lot and now I’m more successful than you.” [Laughs.]