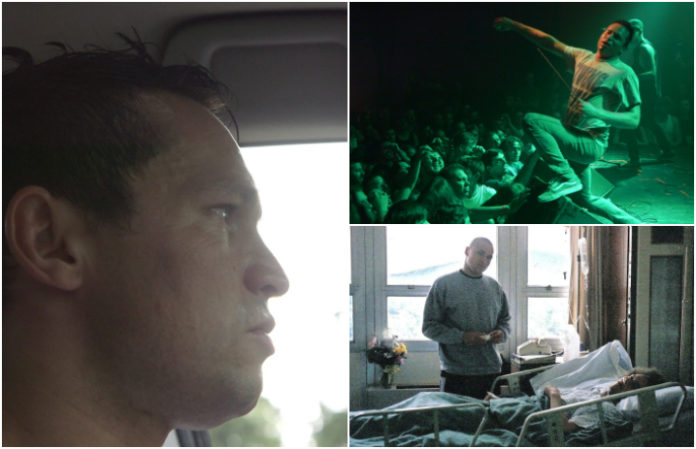 Metalcore act Misery Signals announced earlier this year their plans to release Yesterday Was Everything—a documentary that follows the band's troubled past and tumultuous journey of reconciliation.

The documentary was directed by Matthew Mixon and filmed during the 2014 Malice X tour—the tour that celebrated the 10th anniversary of the band's debut album and brought the reunification of the band with its original lead singer for the first time in a decade.

You can stream the documentary on iTunes, Google Play and Amazon on June 30. A portion of the proceeds will be donated to Mothers Against Drunk Driving.

Check out an exclusive new clip below:

AP caught up with Misery Signals' guitarist Ryan Morgan to talk about the documentary, how cathartic it was for the band and how they're doing today.

What was it like filming the documentary? Is there a moment in the doc that was hard to watch? If so, what was it?

I think the hardest moment in the film to watch comes when Jesse's mom talks about her experience with Jesse's van crash.  The authorities called her and told her there had been an accident and there had been fatalities, but they weren't able to tell her if her son was alive. It's harrowing.

But without even the stuff surrounding the accident, there's all the discussion of the split between members and the tensions that caused it. And it's pretty clearly still tense as we set out on the tour together.  It didn't all happen very gracefully, and there is definitely some guilt and ugliness on display. It's hard to watch yourself struggle. There were a few periods of time where I thought we were going to have to cut out sections of the movie, because I was imagining audiences seeing it and disliking everyone in the band.  But we made the decision to keep everything in it, our failings and flaws included. And as uncomfortable as that can be for us at times, it's the only proper way to tell this story. And after spending some time with it, I'm happy we made that call because it gave the film a human vulnerability that really sets it apart.

You talk in the clip about how current bands are functioning today: creating vids for YouTube and creating something viral, etc. Do you feel like it’s seemingly easier now to make it than it was a decade ago? What are the similarities and major differences? Any advice they might have for bands today trying to make it?

It does seem very different, but I think in that clip I was trying to express how little I know about the way it works.  It's got to be baffling for newer bands to try and figure out the way forward because everyone seems to be searching for like an internet back door to popularity. I think a lot of managers get hired because bands don't know where to point the ship.

Misery Signals didn't have that problem at all because our course of action felt really self-evident. We wanted to perform our show in front of as many people as possible. In our minds, touring wasn't even a vessel to some other thing; touring itself was the goal. So we just got out and played every show we could play.

How's the band now, after losing their vocalist and filming this documentary? Do you feel it was like a therapy session, filming this?

That's the perfect word for it, therapy. The band is good. The reunion itself was great in it's own right, reconvening with the original guys after so much time apart, but it was combined with this parallel process of making the film. So we were doing interviews with the camera and slowing down to digest how it was feeling each day. Which is almost exactly how therapy works: You slow down enough to examine what you're feeling and why you think things are the way they are.  And I ended up unpacking a bunch of old feelings that I hadn't examined since this rift in the band so many years ago.

And the process extended out across months while the film was edited and constructed. It was so cool to look back on conversations with all the band members and see how they were also experiencing that effect, and how it fell into place as a narrative.

Ultimately, what message do you hope viewers get from this documentary? What do you want them to walk away w/ after watching?

To start touring as an unknown band, to ride out without knowing what will happen or where it will take you requires a certain reckless spirit of adventure — and probably a degree of naivety. The story itself is about reconciling friendship, but beneath that it's also about the youthful willingness to jump into something with both feet, to devote all your time and energy to something and discover the way it rewards you. Because it's so true in our own lives that you get back what you put into a thing. If I hadn't committed wholly and completely to pursuing the band, the music, I would have none of the friends or experiences or skills or anything that I value in my life. So it would be awesome if some people watching can tease out some inspiration from that, and I'm hopeful that when they watch the film they see it as a demonstration of giving-it-all and being so grateful for the journey it's taken us on.

Watch the official trailer here, and be sure to check out the documentary on June 30.

Are you excited for the Misery Signals documentary? Let us know in the comments below!