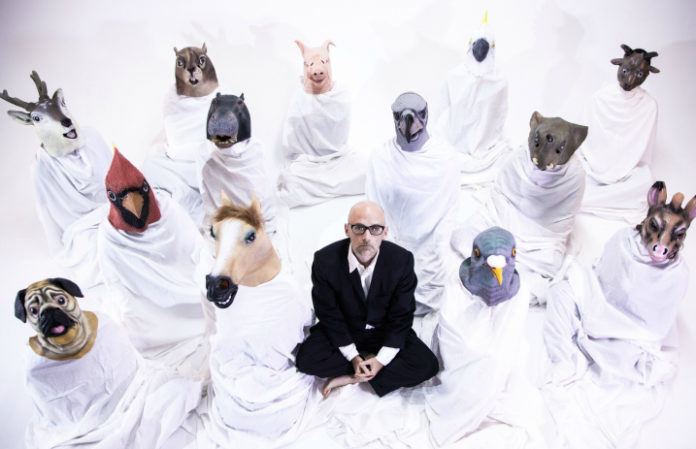 Moby considers the void. The creative chasm, the commercial abyss, the existential vacuum—all corners of concern for the musician, who made a name for himself with 1999’s Play, its attendant hit singles and multi-Platinum awards. Now, he’s mostly untethered from the restrictions of music-biz expectations, and he made exactly the album he wanted to hear with More Fast Songs About The Apocalypse, his second record with the Void Pacific Choir.

And then he released it online for free.

“Removing any possibility of making money from music has been really creatively emancipating for me,” he tells AP, eyeing the altered state of music consumption since its economic peak in the ’90s. “In the days of CD sales, if you had the potential to sell a lot of records, it sometimes made people cautious. There were times when it even made me cautious, when I found myself employing creative criteria that involved market forces. I’m a little bit disgusted with myself that I spent some years buying into that.

“Life is too short and art is too precious to make those kind of compromises,” he continues with a caveat, “if you don’t have to. I have the luxury of being a single guy with no kids, no spouses, no family, so I don’t have to think about those compromises, which is nice. Maybe I’d feel differently if I had a child who was heading off to college.” Freed from any financial aspirations, then, into what artistic realm does the veteran music maker choose to go? Back to that first spark of inspiration, to the innate sound of his adolescence, to the movement that made Moby a musician in the first place.

“Life is too short and art is too precious to make … compromises.”

More Fast Songs resumes Moby & The Void Pacific Choir’s recent resurrection of powerful, pulsating post-punk, the type of music that inspired him in his youth. The album and its preceding counterpart, last year’s These Systems Are Failing, arguably represent the artist’s most rousing and important work in years, following 2013’s collaborative Innocents and 2016’s purposefully somnambulic  Long Ambients 1: Calm. Sleep. Endearingly, Moby’s personal rock revival was evoked by a familiar technological happenstance: He got Spotify.

“About three or four years ago, I finally got Spotify on my phone,” the musician recalls. “I’m sure my experience was similar to a lot of other people’s experiences. At first, I used it as a way to hear new music. But I very quickly turned it into a nostalgia machine: Gang Of Four, the Buzzcocks, Magazine, all the music I loved when I was growing up.” Moby’s music-streaming reunion with the heavyweights of late-’70s/early-’80s English post-punk planted a seed in the artist’s cerebrum: He wasn’t hearing this kind of stuff anymore.

“I started asking myself, ‘Who is making really energetic, melodic post-punk music in 2016, 2017?’” His eureka moment came with defined lines in his mind. “It’s these polar extremes in music now. It’s either speed metal or quiet dinner party music. What do people listen to if they want to jump around and yell at the top of their lungs, but not listen to metal? And I love speed metal, I love quiet music—I’m not maligning it. But passionate, synth-and-guitar-driven post-punk music seems like it’s kind of disappeared.”

“What do people listen to if they want to jump around and yell at the top of their lungs?”

Granted, the swells of influence engendered by the ’70s punk movement, the ones that birthed post-punk and new wave and art rock, haven’t entirely vanished. Moby recognizes the contemporary artists who have reached back into the neo-psychedelic golden age while maintaining his retrogressive belief. “MGMT, their first record, they sort of did that,” Moby says. “TV On The Radio have gone that direction at times. But when I listen to some of my favorite records from that certain period, like Killing Joke, Theatre Of Hate, Devo… there’s just this energy to it.”

And that throwback energy is exactly what you hear on More Fast Songs, its nine buzzsaw tunes fueled by their creator’s refined methodology and booming abandonment of assumptions. “At this point in my life, the great joy in making records is simply the act of making them,” Moby contends. “No one’s gonna buy these records, so I might as well love making them and enjoy the process of releasing them. No career or commercial expectations at all. It’s really fun and really liberating.”

While Moby has shed his ambitions for further fame or fortune, the artist stays true to his social activism roots and characteristic political distrust. Indeed, More Fast Songs was introduced with a hilariously typo-ridden fake press release claiming to be penned by one John Miller, the pseudonym reportedly used by Donald Trump when posing as his own press representative. Obviously, Moby—the charitable, vegan, animal rights activist, post-punk revivalist—takes an opposing tact to Trump’s seeming pretension. (Just watch the video for Fast Songs’ “In This Cold Place,” featuring a symbolic cameo from a cartoon Trump likeness.)

But Moby’s careful considerations and antipodal presentations go beyond bureaucratic disdain. While the Void Pacific Choir project could basically be viewed as the artist’s reaction to Trump’s America and the willful ignorance it apparently upholds, Moby knows there are yet bigger things at play: “On the off-chance that someone would ask me, ‘What does Void Pacific Choir mean?’ I could say, it’s about changing our relationship to the vast unknowable void from whence we came, and where we all end up.”

“As long as there have been humans, they’ve been trying to figure out what the void is, and what relationship they should have to it,” Moby says. “That can manifest as religion or nihilism or hedonism, but almost always, the assumption is that the void is scary and negative. I thought that was interesting. What if the void is actually kind of a nice place?”