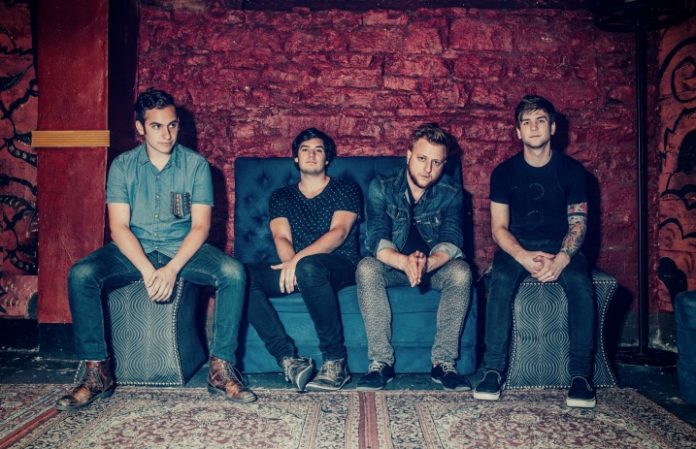 Modern Chemistry have teamed up with Alternative Press to bring you the premiere of their music video for “Part Three.” The track comes off their new EP Dreaming Adjacent, which was produced by Taking Back Sunday’s Adam Lazzara. Dreaming Adjacent is their third self-release EP and comes after We'll Grow Out Of This (2012) and Self Help Guide To Being Alone (2014).

AP caught up with Modern Chemistry's frontman Joe Zorzi to talk about their latest realease and what's next for the band. We also talked to Lazzara to find out more about how he handpicked the band for his debut as a producer. Head below to check out the music video for “Part Three,” and see what both had to say about the experience working together.

You can get the EP, which dropped May 13, on Bandcamp, iTunes, Spotify and Amazon.

Why don’t you tell us about the song and the video for “Part Three”?

Joe Zorzi: We had on our first EP, We’ll Grow Out Of This, we had a song called “Part One” and a song called “Part Two.” I was writing this song in my bedroom and it had this really cool sound, and I don’t know, it came together real quick. I brought it to the guys and we shaped it. It had a similar feel to the other two songs. It was almost fully there right away. The whole sound was there right away. I was like, “Guys, I think we should call this ‘Part Three.’ I think this should be a part of that, we should just continue that on.” It’s kind of a way to continue what we’ve been doing, and show people a new version of our old sound. I think this song captures exactly the next step, and it’s just tightening it up and going for it. The video we did in a room next to our rehearsal space.

Adam Lazzara: It does need to be noted that they built all that stuff themselves. I think it looks great. They went in their rehearsal space, and it really speaks to them having a vision and doing the most with what they had at hand. I think there’s something to be said for that; just that their heart’s right in the middle of it.

JZ: [Laughs.] Honestly, I don’t know, but there could have been. There was so much random junk in there. We have a refrigerator, computer monitors. That’s actually a lampshade. We put it in there. We had a theme color-wise and look-wise, and we kind of gathered all these things we could find that were super random… just to create a little bit of our own world for that song to live in and for this whole EP to live in.

You guys were introduced by Jillian [Newman], who manages both of your bands. Maybe you could tell us a little bit about that, to start.

AL: She had been looking to take on another band. When she was looking for people to talk to, she’d email links back and forth, and be like, “Oh, what do you think about this band, what do you think about this band,” and Modern Chemistry was one of the bands that really stood out to me. I think it’s because a lot of what they’re doing isn’t super scene-y, if that makes sense. They just seem to have their own identity, and I’m always drawn to that in general. We were doing some shows up in the Northeast, so we had them open for us. I thought they did a great job, and to hear how long they’d been a band, and to see they were already at that level, was really impressive.

How did it come about that you decided you wanted to start your producing career with Modern Chemistry?

AL: If I could live in a studio, I would. I just love it, I love learning more about it over the years. When it started, I wanted to just be on the road, and then I feel like as time goes on I just want to be in the studio, it kind of shifted. [Laughs.] Just through playing shows with them, and getting to know them, I think I’d actually mentioned something to Jillian first, because I’m not overly competent on my engineering skills or anything like that, so it’s not something where I would walk up to a band and be like, “Hey, you should let me produce you.” I had mentioned it to Jillian first because just with some of their songs, I thought, “Oh man, I think a lot of my musical taste is in line with what they’re doing, and I think maybe there’s something I can bring to the table here.” I think it became almost this game of telephone, where she mentioned it to them, and that’s how the conversation got started. I was really adamant saying, “Look, guys, this is the first time I’ve ever been on the other side of the console. And I really don’t want to mess anything up because I love your band. So go easy on me.”

If you could give the plea to fans to check out this band, what would you say? How would you sell them?

AL: For me, I think that Modern Chemistry is one of those bands that when you put it on, it’s an instant thing. It just really resonates with me. If I were talking to someone that shared the same taste in music that I do, I would just hand it to them and say, “Trust me.”

Here’s the thing—my brother listens to a lot of the bands that are coming up and popular now, so he turns me on to a lot of stuff. I think through all of the bands that I’ve heard, Modern Chemistry seems to be the one that’s most realized out of all those bands. They seem to have an idea of where they want to go, and I can hear it in the music. I think that’s one reason people should check it out. It’s a lot of that confidence that draws you to things like that. Or at least for me; even with certain people. These songs have that confidence in them.

So Joe, it has been a little while since you guys released new music. The last EP was 2014?

JZ: It was the first week of August in 2014. Two of those songs we recorded a while before it. There was a disconnect, like, man, we gotta put something fresh out, so people can see how we’ve grown. So much has changed in our lives since we last recorded. We know we’re different. We had to let everyone else know.

You’re going to be working on a full-length next, right?

JZ: Yeah, for almost a month we’re going to be in Baltimore. We’re going to be with Paul Leavitt, he did some of our favorite albums. We love the Dangerous Summer, and he’s done a lot of great records down there. We’ve never had a moment where we we’ve been able to, for such a long time, be immersed in the recording process and be in the studio the whole time. We’ve never had this many songs at once to record either. It’s definitely going to be a huge step for us, as a band, together.

Tell us the story of how you guys started working with Adam [Lazzara], and what it was like working with him as opposed to the first two EPs that you did totally on your own?

JZ: We ended up playing a bunch of shows with [Taking Back Sunday] throughout the last year and a half, and became really friendly with the whole band. They were really good to us. Adam happened to hear some of the demos we were working on for the new album. He really liked them. He came up to us after our holiday show, we played with them at Starland in December, and he’s like, “Hey guys, so listen, I’ve never done this producing thing, but if you want to do a few songs with me, I’d love to try it out.” And we were like, “Yeah. Obviously we were going to figure something out here and make it work.” He’s always been one of my favorite singers. We went down to North Carolina in the middle of February for a quick few days, and it was awesome. It was great how much Adam really cared about all the songs, since he knew we only had a short amount of time to work on them. I would send him really bad cellphone recordings of the songs or acoustic versions, and then he’d call me up and be like, “Hey, can you guys try to do this here? Or can you try to do this here?” And then we’d go back to practice and we’d record it and send it to him. It was this really cool process where we’d continuously have a conversation back and forth. When we got there we had such a handle of the songs with him, it was easy. He really pulled out some awesome stuff from us. He didn’t take over our songs and change them to what he wanted. He helped us change certain little things we played, made certain parts more accentuated. It was a really awesome experience. He knew it was our stuff, and he wanted to make it the best it could be. He was never going to take away from us what we want the songs to be. And we had a great engineer in there too, Mike Pepe. He was the nicest guy in the world. He’s now a good friend of ours. He just crushed it, super fast. He made sure everything got done. Overall, it was a really exciting experience for all of us. We had such a fun time with it. To finally put it out, it’s awesome to have other people see. We’ve been murmuring about it for a while.

What is next for you guys?

JZ: Right now, we’re just super, super focused on getting this full-length done. It’s been so long since we released anything, we figure let’s just do a one-two punch. Let’s get this EP out that we did with Adam Lazzara, and then a few months later we’re going to have a full-length ready to go. From there, the world is ours. We’ll see what happens. I hope it goes in a good direction, but for now it’s all about writing and recording, and making sure we put out the best thing we can. For us, the album has to feel like an album. We’re not going to put out a bunch of songs. It’s really important to us. We’ve been working on it for so long, that we’ve got to see it to the end, and make sure it’s the best it can be. We have no pressure from anyone to have this out on a certain timeline, so we’re going to be able to spend as much time as we need to get it exactly where we need it to be.