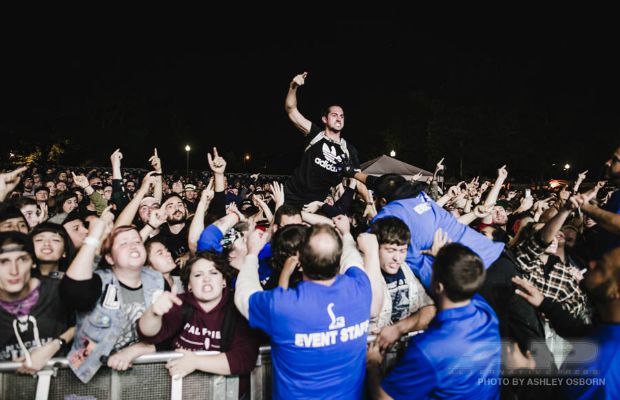 Timing is everything as far as your fanbase is concerned. There’s a thin balance between consistent momentum and leaving enough intrigue to keep people wanting more. Knowing when to switch from one mindset to the other is crucial.

Staying in the public eye is a key step for any new band looking to grow a fanbase. C onstant touring is a classic way to promote and win new fans. The reason is simple: people have short attention spans. If you have a new record out you should be playing shows, talking to the people at each of them spreading your message and trying to get people talking about you. A small run of shows can cause a serious spike in followers; if you’re good or memorable enough people will want to find you after the show, so make sure they know your band name. One person watches you play and posts about it in a different state, and now their whole list of followers are aware of your existence. It may seem miniscule, but it adds up. At the least, you always want to be in the back of people’s minds. The more you play, the more this continues and expands. If you take a long break from shows and social media people tend to lose interest and hit the unfollow button on their phones and their brains.

A common way to lose moment for newer bands occurs when they’re in search of a new label or manager. It’s safe to regroup for a bit and come back to blow them away, but if you disappear for too long then your fanbase will follow suit. A real life example: my friendss’ band was gaining a lot of buzz and just got a new vocalist when their manager told them to wait for a new record deal before they play any shows with the new lineup. They announced the new vocalist and ended up taking over a year off hoping a deal would fall into their laps. This yearlong break from shows eventually contributed to their breakup. Their Inactivity scared away labels, who for the most part don’t want to sign bands doing nothing. In hindsight, it would have been smart to book shows to introduce the new singer, release a new demo to keep people interested and used that momentum to talk to bigger labels. If you’re getting hype, sitting around will kill it.

A constant presence isn’t everything though—sometimes restraint is called for. If you’re a local band, don’t play your hometown more than once a month. Better yet, don’t do it every two months. You want people to want your band. If you play too much you will risk boring the crowd and turning them off to your stuff, but if you play just enough or even slightly less, the worst is them wanting more. National and international tours help space out the time spent in one city and the breaks can make future shows all the more anticipated. You can still do a lot and not be stuck doing the same things over and over. And keeping up on social media in-between tours by supplying fresh content can make the wait seem shorter but more exciting. You don’t have to be in someone’s city to be present.

When bands get big enough, they can use time to their advantage. Having that solid fanbase and waiting a long time before returning to a city means playing with that hype. You can play smaller places that you know you can sell out and it creates a bigger demand for the next time. Everyone needs to buy a ticket the second they go on sale otherwise they wont get a chance. For example, Brand New: They’ll have a small run of shows that will sell out within minutes. It’s a model worth emulating, and after selling out the small venue, you can move onto large crowds, turning the hype from the previous tour into must-see shows.

Then there are bands like Green Day that do world tours on an album cycle, make millions of dollars and take a few years off in between. The scope and break make the concerts seem like a once in a lifetime event every time, something worth aspiring to. If it seems like just another show and fans can tell themselves, “I’ll just see them next time,” you’ve lost the growing game. Be a spectacle if you’re given the opportunity. Unfortunately this upper-echelon of artists is a small percentage, but their management team knows better than to oversaturate their fans.

All in all, it’s safe to say that bands at the start of their careers should play a ton and get in people’s heads while making sure to avoid repeating tour dates and boring their fans. When you graduate to being a bigger band, you can utilize long breaks and turn normal shows into required events. If you make it on a big label and have a huge following, you’re rewarded with the time to relax with your family. alt