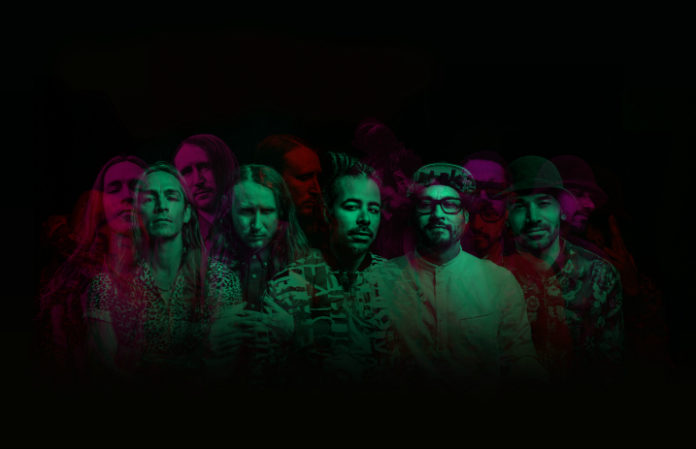 This Friday, Calabasas, California, quintet Incubus drop their eighth effort, appropriately titled 8. This marks their first studio release since 2011's If Not Now, When? In a seemingly unusual move, the band enlisted the production talents of Dave Sardy (Helmet, Marilyn Manson, Oasis) and Sonny Moore (Skrillex). Guitarist Mike Einziger chatted with AP about the processes they chose in making their latest record.

How does it feel to be back on the circuit, getting ready for a new album to roll out and start touring  again?
MIKE EINZIGER: It's really exciting. It was exciting when we were writing the music, and we can't wait to share it with our audience. It's kind of burning a hole in our pocket; it's been finished for a couple of months and all I want to do is let people hear it. We worked hard and on it and are very proud of it and I'm very excited for people to listen to it.

This is the first Incubus record since 2011. What do you think has changed in the band’s creative process since the last record?
Since the last album, I've gone in a lot of different directions creatively. I've worked with different artists on a lot of things that were creatively stimulating for me and my sense of musicality.

Did any of those experiences resonate enough that you carried them into the making of 8?
Definitely. I co-wrote the song “Wake Me Up” with Avicii and Aloe Blacc, and that was very unexpected. I am very thankful that I was open to working on a song with those guys. If it were earlier in my career, I don't think I would have been; I would probably have been a little more closed-minded to certain things. I really loved the process of just meeting people who I had musical respect for but I didn't know [personally]. We wrote a really great song together and it was totally unplanned and completely spontaneous. To me, that's what's really exciting about music. I got to do a bit of work with Tyler, The Creator. I contributed some production work to a couple of songs on his latest album Cherry Bomb. He's a very eccentric guy; his musical brain is very interesting. It was a totally different mindset and way of making music [compared] to Incubus.

With 8, a lot of the early response has been that this feels like Incubus returning to its roots. You worked with both Skrillex and Dave Sardy on the record. Dave established himself in the band Barkmarket, and he's subsequently worked on some very dissonant records. How did you manage the two production styles they brought to the table?
They were different phases of making the record. I, too, was introduced to Dave's work by listening to Barkmarket. L. Ron was one of my favorite albums during a specific period of time when I was younger. I've always been a fan of his work. He oversaw the early songwriting process and more of the tracking. When it got later into the process, that's when Skrillex came in and we dug back into all of those tracks. With every phase, there was this metamorphosis and new twist to the songs. It was a really interesting, creative collaboration the whole way. In the room, during the writing process, and even during the tracking and mixing, we would change things around a lot, very quickly. We would try lots of different things. With Incubus, it's a little harder as it's a full band, and the dynamic is not as conducive to [making rapid changes]. Especially at the end when we were working with Skrillex, we brought that style of record making, writing and recording, trying lots of things and changing lots of things. At the end, that was really fun, as Incubus has never really operated that way. Maybe in the past, the guys may not have been as involved in the process at the end. It was a different way of making an album that the whole band loved. I'm sure it will inspire us in the future. It will definitely change the way we make music as a band for the better. It made the process less rigid and more free-flowing.

“Loneliest,” is an intensely personal song for Brandon [Boyd, vocals], lyric-wise. For an artist, there are risks involved when going into personal subjects. Can you talk a little bit about the process for making that song?
To me, the risks are what make it special. When someone can show their vulnerabilities and share them with a strong sense of honesty and sincerity, that's when music hits me. I was actually very proud of Brandon for allowing himself to be that vulnerable in such a simple way. The ability to be connected with people that are listening to me is kind of the point of making music. I know people make music for all kinds of different reasons, but for me, music has helped me throughout every hardship I've faced my whole life and it's also been there for every celebration I've ever had. Music has always been a best friend in many ways. That's the music I connect with the most: When you can pull a concept from a song you hear into something in your own life, and it makes you feel a certain way. And that's what I love about this album: It has vulnerable moments and is honestly written. That's what makes it special, that's what makes it real. We can release it to the world now because it is exactly what we wanted.

Would you say resonance is a key element to making music for you and the guys, then?
It's a hope of mine that people will connect with it. People come up to me all the time when I'm walking around or at the gas station or supermarket, whatever. A kid will walk up to me and say, “This song you wrote helped me through the loss of my best friend,” or “It was the song I listened to throughout high school and it helped me get through these hard times.” To me, that's the coolest thing in the world. If somebody gets that from some piece of music I wrote, because I had that experience with other people's music as a younger person, that's the ultimate experience of what music should be. It brings people together in a way that other things cannot.

You spent some time in a California beach shack while you made the record as part of the creative process. Was there any particular goal with that decision?
Early on, Brandon and I wanted to get together and put some basic pieces of songs, with the idea of them being very simple and very honest. We just wanted a place to get together and have no distractions. It was a dinky, crappy little house. It was in Venice, but the area was crack on one side, crack on the other side, and in the middle was this nice row of houses. Venice is a funny place; it's become such bastion of hipsterdom, but it was still a fun place to hang around and write music. Just needed to get out of our zone, I guess. You know, not at my house and not at Brandon's house. I think location can be very important to the writing process, so we wanted to find a neutral place.

So, something that displaces the routine?
Exactly, we needed to find a new creative space.

Sort of like monks secluded in an abbey?
Yeah, we were monks in a ghetto abbey in the middle of Venice. [Laughs.]

You're gearing up for a tour with Jimmy Eat World. Is there anything that the audience can expect in the live setting?
Well, we obviously have so much music and so many albums at this point; we want to play songs that people really want to hear. We also want to play the new stuff. We will have to see how it feels; we'll try to sprinkle the right mixture together. Someone's always going to be mad at us for some reason—we didn't play this song or played a song they didn't like and so on. It's hard to please everyone, but we'll try our hardest. alt