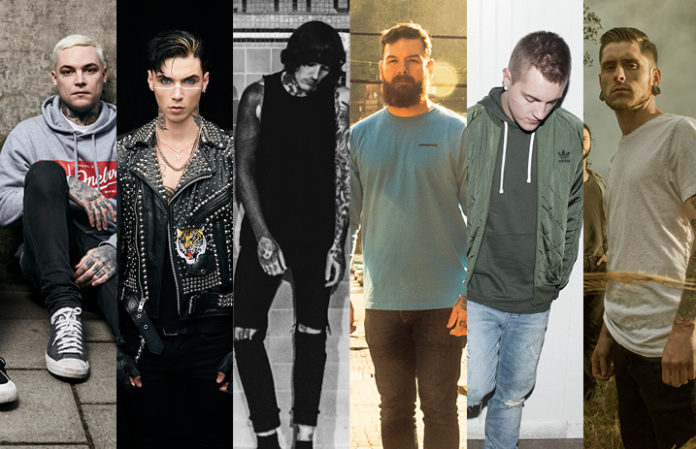 We can’t predict the future, but we can assure you that 2018 will bring plenty of awesome new music. We talked to some of your favorite artists, from Andy Biersack to Buddy Nielsen, who are in various stages of the recording process, to get the scoop on what’s to come next year.

Be sure to check back later in the week for our most anticipated alternative albums.

WHAT’S DIFFERENT: We have, as a country, decided to finally open up our borders to Avatar Country and reveal the truth behind the band, our existence and our king. Therefore, this is the story, and a way of telling the story, that's never been done before.

BIGGEST CHALLENGE: I would say that, compared to earlier releases, this was an even easier album to make. Since we're telling the story of our king and our country, all we had to do was to tell the truth and the vision was extremely clear from the very beginning. So, we used less time in the studio than ever before and still performed better than ever before. We really found true and great inspiration from our king.

IS IT MORE FEATHERS & FLESH OR HAIL THE APOCALYPSE? I think it's both and neither. Avatar as a group, and Avatar Country as a nation always strive to move forward, find new challenges and new angles on what we are creating, meaning there are never any real kickbacks to anything done in the past. The king looks forward, not backward. —Stevie James

BIGGEST CHALLENGE: I don’t know [if] there was a challenge other than time. Trying to stay as focused on it when I was 19, when everything was kind of chaotic. Feldy [producer John Feldmann] was working the Blink-182 record; we were moving studios; I was touring behind Andy Black; Ashley [Purdy, bassist] no longer lives in L.A. and had moved by that point. We ended up building the record together, but in separate places. There wasn’t a big headache—we all knew what we wanted to do.

IS IT MORE WRETCHED AND DIVINE OR THE SELF-TITLED ALBUM? The other day, a song called “When They Call My Name” came out. It’s about my anxiety and how my wife, my family and my friends become that rock that support me. Tone-wise, that song is more in line with Wretched And Divine, but lyrically it’s darker and fits more in line with the fourth record. In this day and age that we live in, I don’t give a shit that people don’t listen to the whole album. I put just as much effort into the track listing and making sure the album looks good in order to create a really great package for somebody. That’s not people’s fault, that’s just the circumstances we’re in. There’s no reason for a young kid that’s just starting to listen to music right now [to own it physically] the singles are available to them in a way that they never were before. I wanted this record to be detail-oriented, and I think our fans in particular are very interested in the stories and the details that make up this record. I don’t think there was that much storytelling and fun in the last record, so I hope the fans appreciate that element on this one. —Jason Pettigrew

BRING ME THE HORIZON

Bring Me The Horizon’s 2015 record, That’s The Spirit, changed their career entirely. By leaving their deathcore and metalcore roots behind for a more pop-oriented rock album, they reached stardom and a new fanbase to match. However, some longtime fans who began listening to BMTH back in 2006 when they released their first record, Count Your Blessings, were not happy about the genre change. But the band’s highly anticipated 2018 full-length just might unite new fans and old. Several months ago, keyboardist Jordan Fish told Daniel P Carter’s BBC Radio 1 Rock Show that the next release would not be pure pop. Instead, the band intend to blend aspects of metalcore and pop for a more fulfilling balance. —Taylor Markarian

CONTINUED ON NEXT PAGE: BULLET FOR MY VALENTINE, CANE HILL