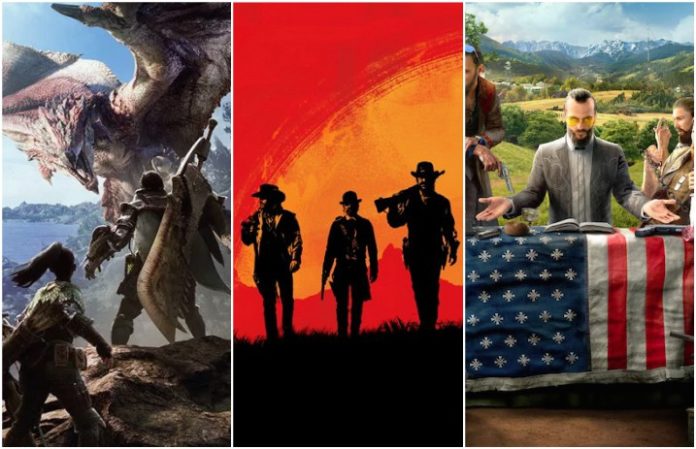 2017 was a wonderful year for gaming fans. The initially hard-to-find Nintendo Switch has given us two franchise masterpieces in The Legend Of Zelda: Breath Of The Wild and Super Mario Odyssey, among other new gems. We also got other platform fan favorites like Persona 5, Horizon Zero Dawn and equally incredible smaller titles like What Remains Of Edith Finch and the frustratingly challenging, yet wonderfully groundbreaking, Cuphead.

2018 is shaping up to be a similarly exciting year for video game releases. We've compiled a list of the 10 most anticipated games from all platforms that are expected to come out next year.

Read more: Here’s why Nintendo is the most punk video game company

The fifth primary installment in a franchise that began in 2004 on PlayStation 2, Monster Hunter: World will once again give fans the opportunity to battle, slay and/or capture incredible beasts of all shapes and sizes. Within a beautifully realized, living, breathing landscape, players can even join in on four-player online co-op with gamers from all over the world to topple titanic monsters in tandem.

Fact: Dragon Ball fandom will exist until the end of time. The newest video game installment in the franchise from Arc System Works and Bandai Namco Entertainment might not, but it sure looks like a charged energy blast of fun. Akin to the style found in modern Street Fighter games and fan favorites like Marvel Vs. Capcom, Dragon Ball FighterZ looks to offer some ultra-colorful fighting chaos full of massive attacks and all your favorite characters.

Serving as a sequel to Ni No Kuni: Wrath Of The White Witch, which was originally released on PS3 in Japan in 2011, Ni No Kuni II will be the first highly anticipated video game released in 2018. Again, gorgeously rendered visuals reminiscent of Studio Ghibli's best works (which makes sense seeing as former Studio Ghibli designer, Yoshiyuki Momose, has reprised his franchise role as lead artist) invite you into an open world as you control Evan Pettiwhisker Tildrum on a quest to reclaim his kingdom after being usurped from his castle.

After a detour that took us to the Mesolithic Age with Primal, Far Cry is headed to Montana with the newest installment of the popular first-person action-shooter franchise. Ubisoft's Far Cry 5 will serve as the eleventh overall entry into the series; and this time around, rather than controlling a lead character such as Jason Brody or Ajay Ghale from past games, the player will create his/her own character to take on Joseph Seed and his militaristic doomsday cult, the Project At Eden's Gate, in an open world full of countless wildlife, weapons and vehicle options.

The eighth installment in the 12-year-old God Of War series sees the return of Kratos, looking more bearded and badass than ever before. Oh, and he has a son now, too–Atreus. With completely rebuilt gameplay and a focus on Norse mythology as opposed to Greek, which all previous games in the series revolved around, this soft reboot should offer a fresh take for fans new and old. Plus, who doesn't love fighting giant gods and monsters to the death while trying to be a mentor and father figure to a child?