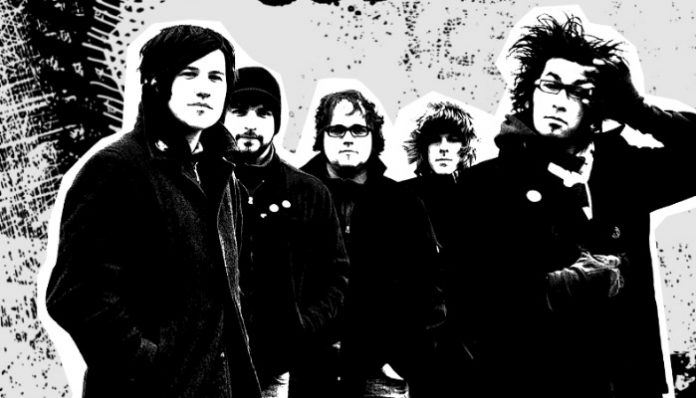 “I’m trying to figure out how I run my Roomba with a Christmas tree in the house,” Cain says as the sounds of him picking things up off the floor come over the phone. “I get it. It is nice, but I feel like I’m cleaning up for the Roomba.”

Longtime fans of Motion City Soundtrack wouldn’t put it past the band to write a song about how they love how the appliance works and how it bums them out. But that’s one thing the members—Cain, frontman/guitarist Justin Pierre, bassist Matthew Taylor, synth op Jesse Johnson and drummer Tony Thaxton—aren’t sure about. In June, when AP asked Pierre about MCS reconvening at the first announcement of the dates, he wasn’t too forthcoming, weaving his charming cloak of apologetic neurosis.

The men of Motion City Soundtrack are still fast buds and love each other’s company. But sharing it again with the world on a full-time basis? That has yet to be seen. The future might not freak you out, but if you miss the band on tour this month, it might suck to be you, regardless. Here Cain and Pierre make some of it clear to you.

I went back and reread the interview I did with Justin back in June.

JOSH CAIN: I’m sorry. That guy can be a pain in the ass sometimes. [Laughs.] You know, we say things to each other in the background about how to do things and how you want to prepare for things. You know, you do press, you’re not going to do press, what are you going to say, and sometimes he just gets fixated and doesn’t know what he’s doing. He’s just a meltdown, a nuclear reaction. He seems to fall apart there.

I asked him if the reunion started with just doing the New Year’s Eve gig or was it, “Let’s start 2020 with a bang and do a tour so MCS can represent to the rest of the planet?” The answer was, “I think…I don’t know. To be honest, I’m more as a performer, the writer, the social media guy. So I don’t really know. Josh Cain would be a better person to talk to about how things came up…”

CAIN: [exaggerated groaning.] Figures he’d throw me under the bus.

So something I should’ve asked you six months ago: How did this start?

CAIN: With band business, you don’t want to push too much of [the] curtain back, right? We were all doing our own stuff, like you said, and living our lives and trying to further our human experiences.

I think that the House Of Blues in Chicago had reached out to us to do a New Year’s show. They had actually reached out before, and it didn’t work out. But the timing wasn’t right. We were in this weird, ambiguous space of, “We know we want to stop. We don’t know what we want to do next.” We don’t even know if we’re even gonna want to see each other. Not that we’re mad at each other, but we haven’t even grown as humans. We’ve been hitting the pavement, doing the touring, being a band. And that was our identity. We hadn’t really worked on our own identities for a long time. Some people pulled away and tried, but it’s really hard to do that.

I’m not complaining. It’s a hard thing for people who aren’t living that kind of lifestyle, too. It’s not like, “Life is hard. I mean, I’m a touring musician.” No, life’s great, but it does have some drawbacks. And one of them is that you have a family at home, and that’s the sort of life you really want to experience. So we were all for that. But when the opportunity came up, we were like, “Hey, we are for this.” It didn’t work out to do it that year. It would have been super-haphazard, and we wouldn’t have been able to do anything. And that was OK. But it got us talking about it. Like, “Hey, that’s cool. Well, let’s do a thing then. Let’s plan it now that we had another year to figure out what we want to do.”

This [tour] gives us an opportunity to actually construct a way to start playing shows again. And if it’s more than just a tour, wellll, we haven’t gone on tour yet. I know we’re overwhelmed with the response. I’m really excited to be playing shows again.

The situation was friendly though, right? You did still speak to each other?

Oh, yeah. There was a little while there where we didn’t talk as much. Not that we were avoiding each other: We were just living our lives. It was just a point where people were at their breaking point. Some people more than others. When we made the decision to stop, some people were like, “If we don’t stop, I’m done.” And that’s the point where you don’t really want to keep replacing and changing and dwindling away with different members. We want to maintain who we are at this point [the] best we can. And there were people that maybe didn’t want to stop. But we all kind of came together. That this was the best moment for us personally and for our band. You don’t want the thing that you’ve worked so hard to build to just become a mess.

Read more: 10 Bands who played Warped Tour the most on its cross-country run

CAIN: I should’ve texted you, but he started asking me questions, and I’m spilling all the beans, so it doesn’t matter. We’re talking a lot of shit about you, though…

PIERRE: No difference in daily life.

PIERRE: What did Josh say about that?

CAIN: I was being a bit more forthcoming than you were. But we set you up for that, and I feel bad.

CAIN: That is just part of it. We’re not really doing a lot of interviews, just because it doesn’t do much for us personally. And…this all sounds bad. I’m going to shut up.

PIERRE: We reached a point in our lives where we just kept getting the same questions over and over again. And we’re like, “I think you guys can just look this up,” you know? Jason, I can talk to you all day about random weird shit. Like, let’s get into it. But I don’t really know if there’s a whole lot of new stuff to say because we haven’t seen each other in three years. [Laughter.]

CAIN: I don’t think anybody cares enough to be arrogant. [Laughter.]

I think you earned it. A lot of these dates are already sold out, right?

PIERRE: Yeah. No one really worried. I think this is the best on-sale we ever had. Honestly, you know what? I don’t think I ever even started paying attention in that sense until I did my own thing where I was nervous. It’s flabbergasting. That’s a weird word. Can I change that? You know, it’s just pretty rad to know that there’s still people out there that are like, “Hell yeah, we want to see you play.” I just get a kick out of the fact that people still care.

What did you two learn from the break?

CAIN: I think the break taught me that it’s OK to be home and be a part of my family and be really connected to that and not want to leave. Stopping was a perfect time for me to save the life I have built, to really become connected in the way they need to be connected to the life that I’m going to live beyond whatever the band is. Without that break there, I don’t think I’d be in the same place I am now.

PIERRE: I think it’s also like Tony leaving a few years earlier. I think he hit that same wall before we did. I think we were all inevitably going to hit that wall. You know, I think Josh was freaking out, and Jesse was for sure freaking out. He was about to have a kid, and I was secretly freaking out. But I was just glad that Jesse said something so I didn’t have to say it first.

PIERRE: I don’t want to throw my kid under the bus, but I mean, it feels like a thing. [Being in a band] is like a train moving at a speed that you can’t get off it. You’re always planning a year in advance. And, you know, it’s always the thing. And it seems normal until you want to get off it.

But now you’re back on it. Slightly. How have rehearsals been to get four years of rust off?

CAIN: I was pretty scared. But once I got in the room, it felt pretty good again. It was really fun. I feel like Tony is more in his prime of playing because he’s been playing with a bunch of people in the last few years. Guys like me haven’t been doing shit. [Laughs.]

Will there be new music? You’re not going to pull out a special track, similar to what you did with “Inside Out” or anything like that?

CAIN: No. But you know, you’re putting us in the same place for a month at a time. You never know what might happen. We’ve continued to send each other ideas here and there over the course of these years that we weren’t doing anything. That’s never stopped.

Promising. Do you have any advice for My Chemical Romance for their big return on the 20th?

CAIN: I think they know what they’re doing.

PIERRE: I will say that I’m really excited for that book and Netflix show.

CAIN: It’s cool to come back. I mean, I figured at some point that would happen. They just got to live their lives for a while. I’m sure it’ll be exciting. Nothing but high fives from me.

Motion City Soundtrack kick off the Don’t Call It A Comeback tour on New Year’s Eve in Chicago. Remaining tickets for the run are available here with dates below.