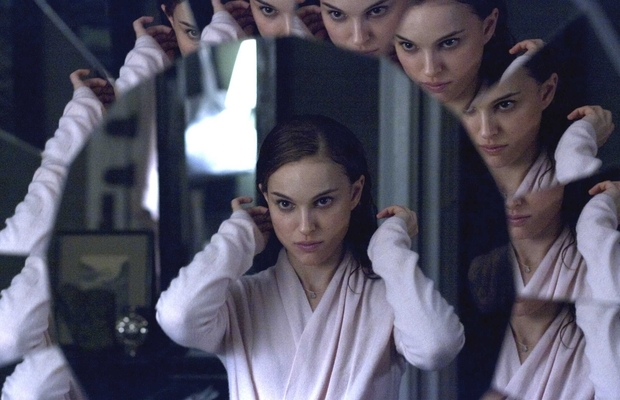 On paper, Black Swan looks like a potential snoozer: “A psychological thriller set in the world of New York City ballet, Black Swan stars Natalie Portman as Nina, a featured dancer who finds herself locked in a web of competitive intrigue with a new rival at the company (Kunis).” Or so reads the first line of Fox Searchlight’s official synopsis, which is not only slightly (intentionally?) misleading, but also a completely understated description of what actually takes place in director Darren Aronofsky’s (The Wrestler, Requiem For A Dream) latest feature. The film’s official trailer offers similar downplay and misdirection. Most trailers magnify whatever intrigue and intensity a film might contain—sometimes manufacturing it outright through the editing process—but Black Swan’s might as well be for a different movie. More significantly, the impression the trailer and synopsis create is that of a film that many people—reviewer included—would probably have no interest in seeing were Aronofsky’s name not attached.

Of course, none of that really matters once you get to the theater and actually experience Black Swan. You’ll quickly realize that the relationship between Kunis’ and Portman’s respective characters isn’t what drives the film, not by a long shot. Selected by the ballet company’s hard-nosed, womanizing artistic director (Vincent Cassel in a razor-sharp performance) to play both the White Swan and Black Swan lead roles in the company’s performance of Tchaikovsky’s Swan Lake, Nina suffers an internal crisis of Kafka-esque proportions. Escalating bouts of intense paranoia, bizarre hallucinations and unnerving self-abuse ensue in her dizzying pirouette toward a strangely inevitable but largely unforeseen climax. To say that Aronofsky keeps us guessing is just more understatement.

So is it enough to say that Black Swan just might be the best film we’ve seen this year? The only other one in the running is David Michôd’s brilliant Aussie gangster flick, Animal Kingdom, another powerful psychological thriller featuring a woman driven by steely-eyed ambition. So maybe we should add that we’re huge fans of Aronofsky’s past work, and Black Swan is easily his finest film to date. Its most startling aspect, perhaps, is the slow and nasty unraveling that Portman executes as Nina Sayers, a severely driven, severely unhinged ballerina living in a tiny New York City apartment with her overbearing ex-ballerina mother, played expertly by Barbara Hershey. (The two have a sort of Carrie-esque relationship, a similarity that may or may not be intentional on Aronofsky’s part.) We honestly didn’t feel one way or the other about Portman’s acting talents before, but she pulls off the performance of a career in Black Swan. As Nina, she’s by turns fragile and frigid, self-centered and psychotic—but above all determined—and it’s incredible watching her shift emotional gears so effectively.

From start to finish, there are all kinds of details to delight in: the mesmerizing cinematography; Clint Mansell’s haunting score (with help from Tchaikovsky); Winona Ryder’s brief but extra-creepy turn as a ballerina who goes off the deep end; the deft and tasteful use of special effects to conjure Kubrickian death hallucinations and stunning physical transformations. But mostly it’s the inescapable sense of paranoia with which Aronofsky imbues almost every scene. To that end, one could probably write a book about the prevalence of mirrors in Black Swan. Beyond the internal dichotomy that the Swan Lake backdrop/storyline lends itself to, this film could only be done with ballerinas as the main characters for one other reason: If you’re standing in a ballet studio, you’re surrounded by your own reflection.

And that’s just one of the many reasons this movie will be endlessly analyzed and talked about—not just by critics or by fans on the internet, but in film classes for years to come. Black Swan is Aronofsky’s first true classic.  Don’t sleep on it.