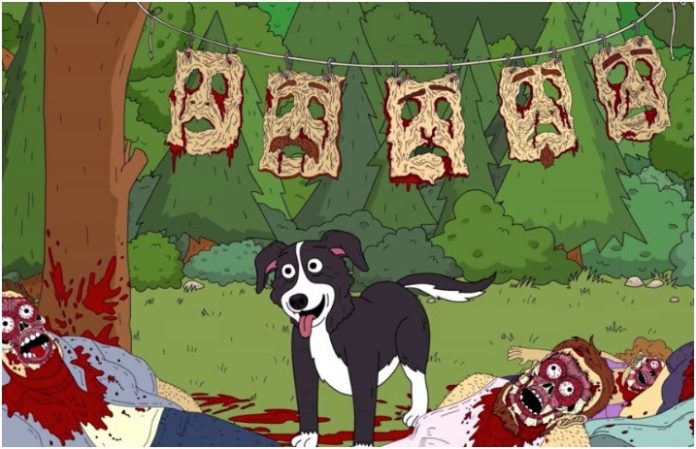 Mr. Pickles can do just about everything. He’s a faithful dog that can fetch, call for help when his humans are in trouble and, of course, rip the faces off his victims and bring them back to his satanic lair. He’s the most metal cartoon pet you’ll ever meet, and to prove it, he’s going on tour with Exodus and Municipal Waste.

The Thrashtacular Tour will celebrate the return of Mr. Pickles to Adult Swim for its third season, which fans can watch at midnight EST/PST Feb. 25. The tour, which begins Feb. 22 in Seattle and ends March 10 in Atlanta, will bring fans exclusive merch and other surprises. (Yes, Mr. Pickles’ doghouse of pandemonium will be there!) For show creators Dave Stewart and Will Carsola, Thrashtacular will bring all of their favorite art forms together, not to mention old friends.

“Municipal Waste are actually friends of ours from Richmond,” Carsola says. “We actually [produced] a music video for Municipal Waste a long time ago; 15 years ago, something like that.” Both Carsola and Stewart were an integral part of turning Richmond, Virginia, into a hot spot for heavy music in the days when they called the city home. In addition to producing videos for Municipal Waste, they also worked with Lamb Of God and Avail in the early stages of their careers.

“We would do mixed-media events,” Stewart recalls, “where we would make videos and show them, but then we would get bands to hang up artwork and to play. We were super-heavily involved in that kind of stuff early on. We’ve had a strange path compared to most people, I think.” Indeed, going from the metal music scene to sketch comedy to cartoons is a little bizarre, but what else would you expect of the creators of such a vulgar, messed-up show? (That’s not an insult, by the way. Mr. Pickles works hard to chomp people’s legs off, scam on his master’s mom and kill strippers to earn that reputation.) But even though they are now primarily focused on animation, they have never lost touch with their musical beginnings.

“There is a kind of a correlation between musicians and the way they go about things,” Stewart continues, “and the way Will and I do, too. We’ve always been more friends with bands than we are actors. The energy of music and the people who are in music really fit more into our vibe… The energy of our show and the rhythm of it is, I think, kind of musical in a way.”

However, metal isn’t just a muse sitting in the shadows—it plays an active role on the show. Mr. Pickles has seen vocal talent from music icons such as Iggy Pop, Henry Rollins and Rob Zombie. The show’s theme song is a thrash-metal banger, and the same brutal scoring is used to help narrate the storylines of various episodes.

So while to some, a cartoon character tagging along on tour with metal musicians may seem random and highly unusual, it is perfectly natural for Carsola and Stewart. As such, the two will be attending the Anaheim, California, date of the tour as both creators and fans. “Those guys put on some of the best live shows,” Stewart says of both Exodus and Municipal Waste. “See those guys while you can.” If you don’t, Mr. Pickles will probably sacrifice you to 100 demons.