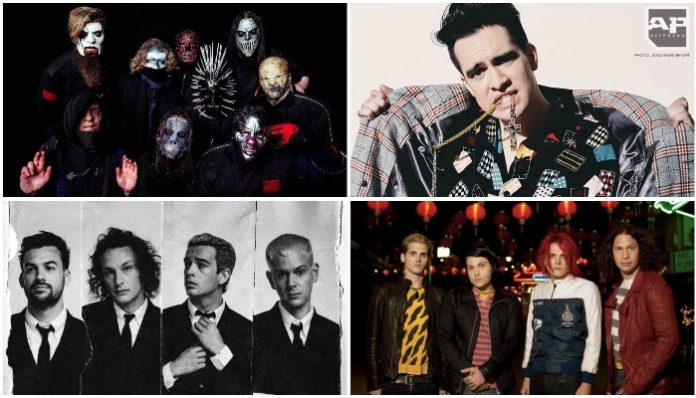 After Bohemian Rhapsody earned its spot as the highest-grossing music biopic of all time, it seems like they’re becoming the latest cinema hype ever since.

With Elton John’s Rocketman and Mötley Crüe’s The Dirt tailgating the success of the Queen flick, we couldn’t help but think about our dream biopics by our favorite artists. Screenwriters and film execs, take notes.

Read more: Slipknot album is Corey Taylor “putting [his] foot down” on divisiveness

From Tom DeLonge’s falling out with the band and Travis Barker’s plane crash, blink-182 have a lot of ground to cover in their breathtaking career. As pop-punk veterans who made a genre-defining effect, it’s only fair to document their history in detail—for instance, DeLonge’s expulsion from high school that led to meeting Mark Hoppus and the decision behind recruiting Matt Skiba after their hiatus.

Fall Out Boy’s resume comprises a long list of achievements dating back to their Arma Angelus days. As the band hit monumental milestones with Take This To Your Grave and From Under The Cork Tree, they experienced a tremendous amount of fame, but also sunk in constant celebrity gossip and battles with addiction. Within the deep confines of their career, there are stories to unravel and songs worth revisiting. Even if the band are far from ending their legacy.

Slipknot have released a fair share of home documentaries featuring abnormal, behind-the-scenes footage of their lives as a macabre nü-metal crew. As a prominent metal icon of the 2000s, their complex and rich chronicle requires a narrative. That would be the most efficient route to detail the origins of the crew and their terrifying masks. Not to mention the transitional obstacles they faced following Paul Gray’s death.

Green Day’s roots go back to 1986 when Billie Joe Armstrong and Mike Dirnt were only 14. Getting signed to a label at 16 and releasing 39/Smooth at 18, the band grew up with their music, showing steady progress that would later catapult them to great heights. They’ve released several documentaries on their music and served as executive producers for Turn It Around: The Story Of East Bay Punk, but it’s time to shed light on their prominent career.

With a handful of shenanigans that slightly mirror the crudity of The Dirt, Asking Alexandria’s notorious rock ’n’ roll attitude was a defining characteristic in their career. The band follow a jagged timeline, having originally formed in Dubai by Ben Bruce in 2006. Since moving to the U.K. and recruiting the current lineup, they’ve gained traction and contributed generously to metalcore. They’re still going strong, too, after devastating upheavals and stylistic changes.

In a decade, future Panic! At The Disco fans won’t be able to name all four original members of the band, and they’ll roll their eyes as you berate them for not knowing the words to “I Write Sins Not Tragedies.” Panic! started as a blink-182 cover band in 2004, with most members still finishing up high school. After catching Pete Wentz’s attention, they rapidly achieved mainstream success, but they also endured major lineup transformations that ultimately left frontman Brendon Urie as the last member with a talented touring band.

Starting all the way back in the early ’80s with a total of 13 studio albums, NOFX definitely deserve a compelling biopic. From their controversial onstage personas to the creation of Fat Wreck Chords, the punk legends have seen it all in their long-lasting career. As massive influencers of big-name bands such as blink-182 and Sum 41, their history isn’t only a narrative of their musical growth but also a demonstration of punk’s evolution.

Before the 1975 made their break with an ’80s-inspired alternative-pop aesthetic, band members have played together as teenagers since 2002. They released a myriad of demos under monikers such as Bigsleep and Drive Like I Do at first. They usually dropped original punk songs and even early versions of “Sex” and “Robbers”. Not much has been revealed about the band’s full story. However, a biopic is the perfect medium to do justice to their booming career.

Black Veil Brides sprouted from their scenecore roots and headed toward a glam-metal direction, reflecting the iconic stage personas of ’80s hair-metal bands. Originally founded in 2006 by frontman Andy Biersack, the band made big strides to solidify their sound and image. From their epic rock-opera concept album to Biersack’s acting debut in American Satan, Black Veil Brides’ journey to stardom is an adventurous plotline worth exploring.

My Chemical Romance’s Life On The Murder Scene and their biographic novels covered a lot of bases, but a cinematic visualization of their career is more fitting for the renowned emo crew. The band formed right after the Sept. 11 attacks with Gerard Way and Matt Pelissier, later recruiting other members to prepare for their iconic debut. With Way already partnered up with Netflix for The Umbrella Academy, this could be the perfect opportunity to satisfy their dedicated fanbase, perhaps even along with a reunion tour.