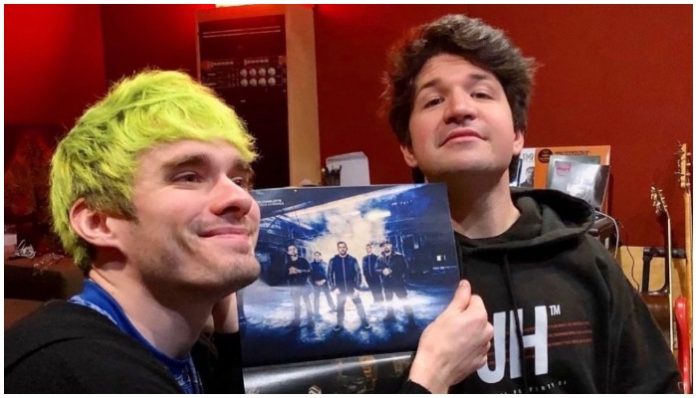 The pop-punk popularity spike we witnessed during the COVID-19 pandemic didn’t come without behind-the-scenes help. Here are 10 individuals supporting the genre while, mostly, staying out of the spotlight.

If a pop-punk album blew up over the past few years, Zakk Cervini probably produced it. He helped guide Poppy’s I Disagree, Waterparks’ Greatest Hits and All Time Low’s Wake Up, Sunshine. Plus, he’s worked with Bishop Briggs, blink-182 and dozens of others. Like Finn in the early 2000s, Cervini is pop punk’s behind-the-scenes MVP.

Avril Lavigne utilizes her platform to boost her pop-punk peers’ profiles. She’s working with WILLOW on her new album, Lately I Feel Everything, and their duet “Grow” will potentially cement the young star’s immediate future as a pop-punker. No longer busting out multiplatinum radio hits, Lavigne polishes her shining legacy in other ways.

Born into a family of audiophiles, mixing and mastering must be in Mike Kalajian’s blood. His excellent work optimizing and balancing Hot Mulligan’s you’ll be fine turned the band into one of pop punk’s hottest acts. He also worked his magic on A Day To Remember’s You’re Welcome, Point North’s Brand New Vision and Silverstein’s A Beautiful Place To Drown. Each of these albums were released in the past 16 months.

The Man Overboard singer found a second career producing young pop-punk talent from the The Gradwell House studio in New Jersey. Recent guests include Northvale and Goalkeeper, but the Nik Bruzzese tree is vast. In a pop-punk haven, countless East Coast bands flock to Haddon Heights to work with one of the genre’s best.

When Travis Barker told Joe Rogan that he was working with some young artists in 2019, nobody could have predicted how many collaborations he’d actually put together. The list is almost comically long, including everyone from LILHUDDY and Maggie Lindemann to WILLOW and K.Flay. Still, Barker uses his immense talents and vast influence to mobilize a young pop-punk army.

Johnny Minardi is one of the masterminds at Elektra Music Group, home to Fueled By Ramen. As the vice president of A&R, he has an extensive amount of experience and undoubtedly helped shape the past, present and future of the genre. Minardi brought on acts such as Meet Me @ The Altar and chloe moriondo, and he signed grandson as well. He’s also worked with megastars Panic! At The Disco and assisted in cultivating that famous roster we all know and love.

If you don’t know the name Allison Hagendorf, you’ve more than likely come across her work if you use Spotify. As the Head of Rock at the music streaming service, Hagendorf helps craft editorial playlists relating to the genre. Her picks help emerging artists gain more streams and fans, as well as share those bands and artists who may have escaped your radar from years past. She’s also preserving music history via her podcast Rock This, where she interviews music icons such as Brittany Howard and Joan Jett to Foo Fighters and LILHUDDY. With Hagendorf working at one of the world’s biggest streaming services, it’s fair to say we’re in good hands.

Good Charlotte’s Billy Martin is known as an established guitar and keyboard player, and now he’s the producer behind tracks from artists such as boyband, Brandon Coleman, Lil Xan and more. Martin’s years of experience in pop punk allow him to help usher in the next wave of alternative music, blending multiple genres. In fact, the artist also worked with Mike Kinsella of American Football and boyband to merge classic and new elements of emo in “big face.”