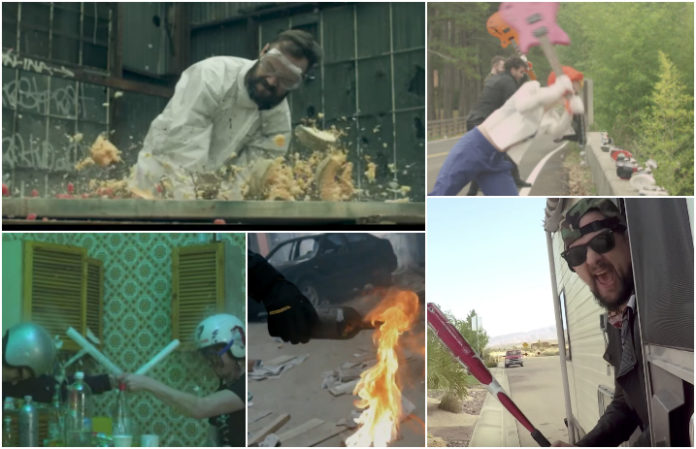 Admit it: We all love watching things explode, get set on fire and smashed into pieces (comment if you got the reference). Apparently, so do our favorite musicians. Music videos are unique creative outlets that allow bands to collaborate with production teams of directors and cinematographers to produce unique art that complements the music and elevates it to its full potential.

Whether they are smashing melons, chopping blocks of wood, destroying their own equipment, trashing hotel rooms or causing riots in the streets, we love seeing our rock star role models satisfy their appetites for destruction (come on, that one was too easy). Here's a list of some of the greatest music videos in which these guilty pleasures are actualized.

“The Lines” by Beartooth

So we get to watch the guys in Beartooth smash melons with sledgehammers, crush computers with baseball bats and destroy a Beartooth cake with a tennis racket? Count us in. With the video’s sole purpose of “destroying shit,” this had to be first on this list. Watch them play all summer on Warped Tour this year!

“Ain’t It Fun” by Paramore

Paramore have to take the prize for creative wackiness with this one. One day in 2014, the band set out to break the most world records in a music video, and we were definitely impressed, especially with the “fastest time to run backwards holding stuffed animals while blindfolded for 30 feet.” 6.14 seconds!

This was such a close call, since “Forget Your Heart” depicts trophies burning, skulls smashing and lightbulbs exploding. However, there is no better way to strengthen the bond between band and fans than causing a riot in the streets together. The Molotov cocktail was just the cherry on top. Ironically, their music video for “Smashed Into Pieces” didn’t have enough things smashing into pieces, and we hope you got that reference earlier. Riot with these guys all summer on Warped Tour!

This was such a difficult choice, such a close tie with “Shut Up!”, where Simple Plan tears up a ballroom full of disapproving adults before realizing they showed up at the wrong venue. In this music video from their No Pads, No Helmets… Just Balls era, the band literally jumps a building into ruins. Who knew pop-punk posi jumps were that powerful?

From destroying mailboxes with bats out of a moving vehicle to bowling in contemporary ways, these music video veterans have done it all. After several collaborations with the Sleeping With Sirens guys, there’s no denying that the GC guys are a source of inspiration for them.

We told you! In this video, the SWS guys are destroying obnoxious caricatures of… themselves? Slightly reminds us of “I Just Wanna Live” by Good Charlotte, when they eventually abandon their food group personas.