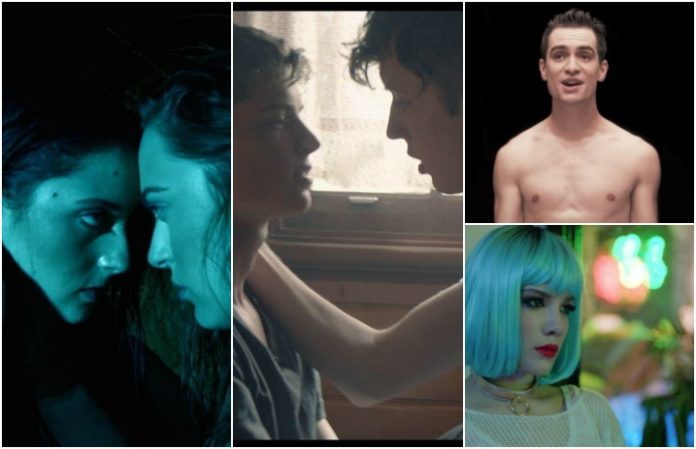 It’s Pride Month! And what better way to express our love for the LGBTQ community than with a perfectly curated list of some of the best queer love stories in the alternative scene?

Read more: 15 merch items to show off your pride for Pride Month

“ISLAND” — COHEED AND CAMBRIA
Progressive rockers C&C top our list with a video that challenges Warner Bros. for best adaptation of Batman V Superman (which, to be honest, isn’t hard to beat). This adorable vid follows two Times Square mascots and their secret romance, bringing dark and light together.

Set in Tokyo, this neon-tinged electro ballad displays a sexy love affair between two young women in pastel wigs. Halsey, who is openly bisexual, was said to be satisfied with this second video for “Ghost.” The first version was narrating a hotel room fight between a boyfriend and girlfriend.

Laura Jane Grace, known as frontwoman of punk band Against Me!, performs with singer Miley Cyrus in this wholesome, feel-good backyard session. Grace, who came out as a transgender woman in 2012, is all smiles as she strums on acoustic guitar next to her pop star pal. You go, girls!

Many will remember this song from Guitar Hero 3, but the music video carries a deeper meaning than what one may notice at first. Frontman Buddy Nielsen has always been supportive of the LGBTQ community and the band have even sold signature “Queer Hardcore” t-shirts on tour.

You may recognize lead singer Alexa San Roman as the ex-girlfriend of PVRIS frontwoman Lynn Gunn, both of whom are openly gay. Regardless, Love, Robot can rock all on their own with this emotional rock ballad, describing a tumultuous love between two women.

For those of us who have struggled with our pasts, it can sometimes be a long journey to build up our confidence again. In this video, Southwest rockers the Maine tell us it’s okay to feel self-doubt, showcasing stories from LGBTQ people and others alike.

With a sound reminiscent of their debut smash hit “Shake It,” Metro Station’s return single off their 2014 sophomore album Savior is outrageously catchy. True to its title, the band show their  support as allies to the gay community with this equal-love anthem.

It’s James Bond with a twist in this indie-pop jam, as the scene is set with an evil supervillain about to destroy the suited-up spy hero in his lab. In the end, we see the hero unharmed and, in a turn of unexpected events, lined up for a new romance with his same-sex nemesis.

A colorful video supplied with a choreographed number from some equally colorful kids, this song is all about gender expression and fluidity. The song’s lyrics convey meaningful ideas relevant to the current mainstream narrative of feminism within our culture.

In tune with their usual nü-metal sound, Otep easily create a rap hook to be shouted from every rooftop. With an “IDGAF” attitude, this video spits in the face of anyone who doesn’t stand for equal human rights, grounded by deep bass and otherworldly synths.

“FAINT OF HEART” — TEGAN AND SARA

Filmed the day after the tragic shooting at Pulse nightclub in Orlando, Florida, last summer, this video pays homage to legendary music stars in history, including iconic gay icons David Bowie, Prince, Grace Jones and Madonna. It is special in that LGBTQ people play all of the roles and is a tribute to the aforementioned, heartbreaking event.

This Aussie electropop video captures childhood innocence in the most beautiful and delicate way possible, including a powerful spin at the end when best friends turn into lovers—despite the obstacles they may face from family and friends.

“ON YOUR SIDE” — THE VERONICAS

This serene EDM groove illustrates the real-life romantic relationship between one half of the Veronicas, Jessica Origliasso, and current model girlfriend Ruby Rose, who wrote and directed the music video in addition to starring in it. Talk about overachievement, but honestly? #Goals.

“GIRLS/GIRLS/BOYS” — PANIC! AT THE DISCO

What would this list be without Panic! At The Disco? Once you’ve gotten past the fact that frontman Brendon Urie is (very) naked in this video, listen to the lyrics: “Girls love girls and boys/And never did I think that I/Would be caught in the way you got me/But girls love girls and boys/And love is not a choice.” In an interview with NPR, Urie says: “A lot of times people want to label something just to make themselves feel comfortable. They wanna call this person gay or this person straight. I have had similar experiences with homosexuality, with bisexuality, and that’s something I feel comfortable talking about.”

Which one’s your fave? Did we miss any? Let us know in the comments.