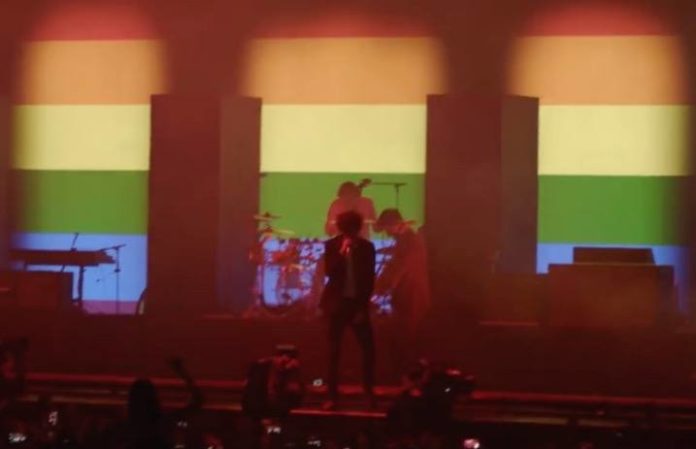 Whether it’s giving fans a good laugh or capturing life on the road, the theme of a music video can go a variety of ways. Sometimes musicians go above and beyond to use the medium to bring awareness to charities and social issues. From self-love and depression to awareness of Alzheimer’s and human trafficking, here are some poignant moments from artists using music videos to spread the word.

Movements frontman Patrick Miranda witnessed the effects of Alzheimer’s firsthand having seen his grandmother and later his girlfriend’s set of grandparents suffer from the disease. Miranda penned “Deadly Dull” as a result of the latter with both lyrics and a video that follow an elderly couple living with Alzheimer’s. He shared his story with the Alzheimer’s Association, revealing the band’s hope to start a conversation within the music scene about the disease and its effects.

This The Maine video opens with people of various backgrounds sharing stories ranging from coming out to abuse, as well as a mix of comments they’ve heard about their appearance. The band shine a light on these insecurities to point out they should be embraced alongside positive lyrics: “There’s beauty and grace in the flaws of your face/All candor and style in the crook of your smile.”

Hundred Suns frontman Cory Brandan believes human trafficking deserves more attention and action, so he used the issue as inspiration for “Amaranthine.” Following the video’s release, the band donated a portion of song sales to THORN, a nonprofit co-founded by Ashton Kutcher that works to prevent children from being sexually exploited.

All Time Low take us back to high school to show teens dealing with bullies and disappointed parents for a theme that encourages embracing who you are despite what others think. “Always be exactly who you are, and don’t live in fear of someone else’s judgement,” frontman Alex Gaskarth said when discussing the video. “Be brave, be bold and find your happiness in yourself and the ones you love.”

Nothing More frontman Jonny Hawkins wrote “Jenny” about his sister Jenna’s struggle with bipolar disorder. The band launched a PledgeMusic campaign with Bring Change 2 Mind, To Write Love On Her Arms, the Jed Foundation, the International Bipolar Foundation and Young Minds to bring awareness to mental health issues. Hawkins also directed the video, which works to offer statistics and ways to get help.

Hurricane Sandy left a path of destruction and fatalities in several places including the East Coast of the U.S. in 2012. The Gaslight Anthem showed support for their home state of New Jersey by gathering images of the storm’s aftermath for their “National Anthem” video and directing fans to PunkCares.org to aid in relief efforts.

Beartooth – “Sick Of Me”

Beartooth’s “Sick Of Me” video aims to bring awareness to depression by introducing viewers to three people—Ernesto, Katie and Portia—and the tools they use to maintain their mental health. We then see how frontman Caleb Shomo works to overcome his own depression, revealing that music and performing have been a driving force.

While this may be a cover of Justin Bieber’s pop hit, Grayscale took the opportunity to spread a message of self-love by figuratively and literally ditching negative descriptors. The band felt it was important to make sure their fans know everyone struggles with personal problems and insecurities, including them.