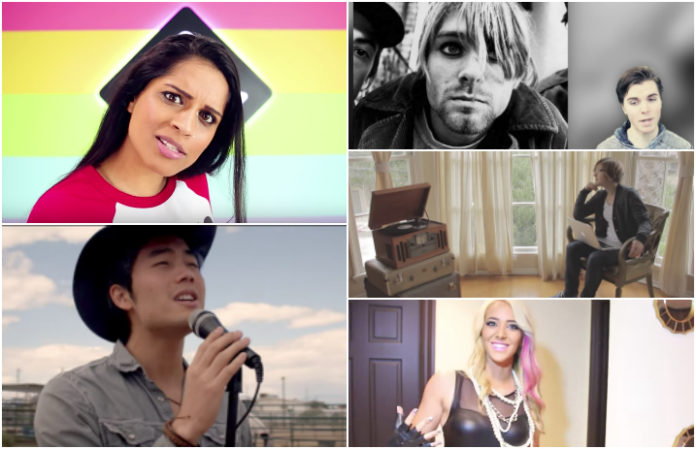 Here on AltPress island, we thrive on music… and YouTube videos. So we had to ask ourselves: What do our favorite YouTubers listen to? While they might not necessarily jam the same tunes that fill our own playlists, it is interesting, nonetheless, to glimpse into the art that helps shape these beloved personas.

A quick perusal of musician/YouTuber Emma Blackery’s Spotify profile will show that she’s been listening to Sigur Ros, My Chemical Romance, Moon Taxi and the Naked And Famous lately. A constant in nearly all of her playlists is Paramore, however. Other top picks include Halsey, Lorde and the 1975.

Known emo Dan Howell not only appreciates the classics such as My Chemical Romance, Panic! At The Disco, Fall Out Boy and Taking Back Sunday, but also champions the modern figureheads of alt rock. On his 2015 Spotify playlist, listing all his picks played on BBC Radio 1, he includes the 1975, Years & Years and CHVRCHES, among others. There’s not quite as much info knocking about on the web about his partner-in-crime Amazing Phil’s music taste other than his apparent professed love for Muse (he recommends downloading Absolution or Origin Of Symmetry).

Earlier this year, the lovely My Drunk Kitchen star took over radio station KCRW as a guest DJ and introduced listeners to a few of her favorite tracks, including several gently percussive, ambient songs (the kind one might listen to while concentrating on ideas for their next video, for instance).

Ryan Higa kept it YouTube AF when describing his music taste in a 2013 interview, where he stated that all his “favorite musicians are all on YouTube.” These days, Higa creates his own music, but if you dig into his channel a bit, you’ll find that he used provide regular commentary on Top 40 music in his vlogs.

iisuperwomanii, aka Lilly Singh, describes herself in her #BawseBook as being “an imaginative kid who had crazy dreams of becoming a rapper,” so it’s no surprise that she listens to hip-hop and creates hip-hop music. She’s also been known to bust a move to classic Bollywood tunes on her channel!

Fun fact: Beloved Irish gamer jacksepticeye (or Sean McLaughlin) used to be in a metal band called Raised To The Ground. Yup. He has also expressed interest in David Bazan and the Black Keys.

As far as we can tell, Jenna Marbles’ music taste is all over the place, just like her channel, where she just does whatever the hell she wants, especially when she’s in one of her “troll-y moods.” She also hosts SiriusXM’s “YouTube15” every Friday at 6 p.m.

The My Digital Escape cast

While MDE has now disbanded, its various members always wore their music taste on their sleeves (literally—so much great merch on that channel). To save some time here, we’ve gone through everyone’s favorites and picked the one that averaged out with the most mutual likes. And that is *drum roll* Panic! At The Disco!

Controversial commentator Onision is no stranger to the scene, as you will see if you poke around his channels even slightly. He made this really easy for us by listing off bands he listens to in a convenient video. Artists listed are primarily some we featured on our covers in the ‘90s—alt classics like Smashing Pumpkins, Nine Inch Nails, Rob Zombie, Nirvana and Marilyn Manson. He’s also been known to listen to Black Veil Brides (and gush over how pretty Andy Biersack is).