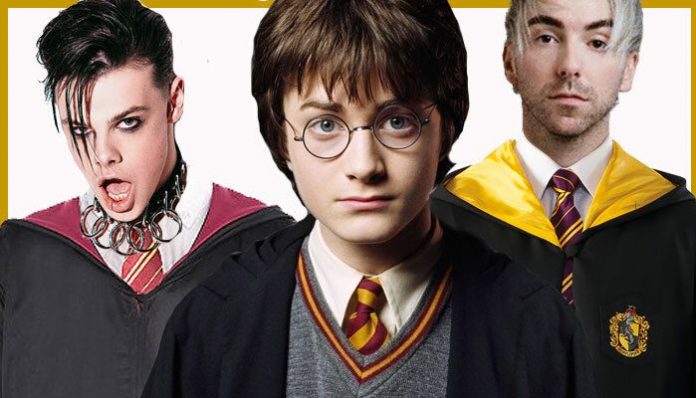 Harry Potter fans, known as Potterheads, and casual fans alike have taken the Pottermore Sorting Hat quiz to discover which of the four houses they would be sorted into if they attended Hogwarts School of Witchcraft and Wizardry alongside the boy wizard himself. Some of our favorite musicians are no exception, taking to the stage and social media to either lament or celebrate their fated house.

Using what we know of the traits that are attributed to each of the Hogwarts houses—courageous Gryffindor, cunning Slytherin, hard-working Hufflepuff and creative Ravenclaw—we’re here to tell you whether these musicians got their true houses spot on or if they’ve changed allegiances over time.

PVRIS powerhouse Lynn Gunn has avoided taking center stage in the band’s creative process, just like a timid Hufflepuff who favors hard work and patience over the spotlight—that is, until now. Through the production of this year’s album Use Me, Gunn has stepped to the fore, taking command of their direction and putting her own confident stamp on PVRIS’ output. Remind you of any Gryffindors you know? The same self-effacing Hufflepuff who produced “St. Patrick” could not have the courage to conquer the seductive “Use Me” and the dynamic “Dead Weight” without swapping Hogwarts allegiances to the house for those with nerve and bravery at their heart.

With his innovative past in Panic! At The Disco, his solo project the Brobecks and his current genre-bending ventures with I DONT KNOW HOW BUT THEY FOUND ME, proudly sorted Ravenclaw Dallon Weekes is well known for the creativity and wisdom that characterizes his Hogwarts house. The house that’s known for producing the quirkiest witches and wizards, Weekes’ refusal to conform to the trends of the scene around him in favor of developing his own makes him the perfect Ravenclaw. Of course, it takes an intelligent Ravenclaw to contribute to the polar opposites of “Miss Jackson” and “New Invention” in the same lifetime.

Surely the nicest guy in the scene can’t be a Slytherin, right? Believe it or not, Sleeping With Sirens mastermind Kellin Quinn was sorted into the correct house for his leadership throughout the 11 years since the band’s formation. Take “If You Can’t Hang” for example—could you get any more cunning and confrontational than that iconic track? Currently working on a solo project that’s sure to put his unique vocals at center stage, Quinn’s musical ambition suggests that he may be one of the few modest Slytherins who won’t turn to the dark side… unless pushed, that is.

You’d be forgiven for thinking YUNGBLUD’s acerbic love-him-or-hate-him persona would belong to the cunning house of Slytherin, but take a closer look at “god save me, but don’t drown me out”—the raw sincerity of this softer, heartfelt side proves he belongs with the brave Gryffindors. The adventurous characteristics of Gryffindors such as YUNGBLUD make the likes of the daring “Strawberry Lipstick” possible, using the outrageous “Parents” as an outlet of anger rather than reflections of his persona beneath the exterior. Controversial but determined in that pursuit, Gryffindor runs through YUNGBLUD’s, er, blood. Let’s face it: Growing up alternative in Doncaster, England takes the courage of a lion anyway.

Halsey describes being torn between the houses of Ravenclaw and Slytherin, where her creativity clashes with her leadership traits. Taking into account that her musical style can never truly be contained within one genre for fear she’ll break out of it, it’s likely she suits the ambitious Slytherin house overall. From the melodic “Ghost” to the backbiting “You should be sad” to the sharp-tongue of “Without Me,” there’s no limit to Halsey’s ambition for exploring trends, creating them and breaking them along the way. Armed with the most cunning lyrics and a natural resourceful energy, Halsey is a Slytherin in all the best ways.

All Time Low’s Alex Gaskarth once had a few choice words to say about quizzes sorting him into the Ravenclaw house, declaring onstage that he would prefer to belong to Hufflepuff. His impeccable work ethic and extraordinary patience over his band’s 17-year history and their eight albums give us every reason to believe the frontman does indeed belong to Hufflepuff after all. Loyalty is attributed to those in the Hufflepuff house, which is also a common theme in ATL songs, including most recently “Monsters.” Hufflepuffs are well known for making others happy over themselves. Therefore, ATL’s catchy classic “Dear Maria, Count Me In” is one of many examples that Gaskarth belongs in the kind-hearted house.

My Chemical Romance brothers in arms Gerard and Mikey Way both claimed they were Slytherins in 2015 and 2014, respectively. Any band with the likes of “Our Lady Of Sorrows” and the menacing “House Of Wolves” in their arsenal deserves a place in the house where cunning, ambitious characters thrive. Even through their six-year hiatus, MCR have led, commanded and inspired the scene around them since their inception, leaving others hanging on their every word and forging an undeniable legacy only Slytherins could. Salazar would be proud!

Self-confessed Potterhead Juliet Simms may not have explicitly revealed her official Hogwarts house, but we’re pretty certain she fits in with the courageous Gryffindors. The tenacity behind the likes of “End Of The World” and the confidence needed to produce “Wild Child” matches up with those sorted into Gryffindor, combined with her heartfelt vocal style, which has only strengthened with time. Bold and adventurous in equal measure as we’ve seen through “100 Little Deaths,” we like to think Simms is the alternative alter ego of her favorite character Hermione Granger.

Palaye Royale mastermind Remington Leith is a proud Slytherin and owner of a Dark Mark tattoo, a perfect example of a musician deserving of membership to the house of born leaders. Armed with his infectious personality that could turn on a dime without warning, Leith’s stage and studio persona neatly fit into the expectations of dark wizards who belong to Slytherin. From Palaye’s theatrical showstoppers “Mr. Doctor Man” to the epic and sinfully dark “Tonight Is The Night I Die,” Leith’s dynamic career at the top of his game could only be the work of a resourceful Slytherin.

QUIZ: Which Hogwarts house do you belong in based on your music taste?

The artist behind an infectious classic such as “YOUTH” would have to be a kind-hearted and loyal Hufflepuff. Troye Sivan proudly belongs to the same house that was once home to the likes of Nymphadora Tonks and Cedric Diggory. All of his signature Hufflepuff hard work aims toward making others happy, both on record and on YouTube. It’s easy to tell the video for “Easy” is the work of a timid but nonetheless creative Hufflepuff personality. Harmless and inoffensive like his wizarding allies, Sivan sorts into the house where the least dark wizards originate, a safe space where trustworthy and reliable characters can live in harmony together.

There’s no mistaking the proud Gryffindor in Against The Current vocalist Chrissy Costanza. From her towering vocal deliveries and her ever-changing styles to her command of a live crowd, Costanza belongs to the house where daring personalities flourish. A courageous Gryffindor can switch between the polar opposites of “Voices” and “Gravity” with ease, choosing adventure over the average every time as proved by ATC’s 2018 record, Past Lives. Sorted into the house for witches who do what is right and stand up for others, Costanza’s emotional performances portray narratives with a refreshing sincerity for a band at the height of their career.

The silver tongue of a Slytherin belongs to Billie Eilish, a proud Potterhead who’s dressed as a Slytherin in the past. Taking charge of the scene with her style, vocals and individualistic approach to the pitfalls of celebrity and fame, Eilish is the perfect candidate for the Slytherin house, where forward-thinking leadership reigns. From the contemplative “everything i wanted” to the sheer confidence of “you should see me in a crown,” the two polar extremities of her complex character fit perfectly with Slytherin traits. Let’s face it: An ambitious if not slightly arrogant effort such as “bad guy” had to be written by a Slytherin.

The life and times of emo stalwarts Taking Back Sunday speak volumes for the adventurous nature of frontman Adam Lazzara, who happens to be a massive Potterhead. His first tattoo was a Patronus, and while he hasn’t been open about which house he’s been sorted into, we’re fairly certain a musician of such driven determination belongs in Gryffindor. The in-your-face nature of TBS’ back catalog, including “Cute Without The ‘E’ (Cut From The Team)” and the timeless “MakeDamnSure,” wielding Lazzara’s own guilt-loaded brand of chivalry could only come from the daring heart of a Gryffindor, someone who stands up for what’s right in the hope of redemption.

Read more: Bottled Butterbeer is here but only certain ‘Harry Potter’ fans can get it

In a band Pottermore session, Waterparks frontman Awsten Knight reluctantly admitted the Sorting Hat assigned him to the Hufflepuff house. However, his band’s legacy of making others happy with their saccharine pop punk fits perfectly with his house’s signature traits, particularly considering Hufflepuff doesn’t really produce dark wizards in their realm, and we can’t see Waterparks turning evil any time soon. Hufflepuffs are known for their patience and strong work ethic, something easily attributed to a vocalist who can conjure the energy needed to perform “Stupid For You” and “Royal” in the same setlist without tiring. For a band with only three albums under their belt, the hard work and diligence of a Hufflepuff is the real secret behind their resounding success.

Linkin Park’s Mike Shinoda revealed on his livestream that he was sorted into both Ravenclaw and Gryffindor by different online quizzes, considering himself a “Gryffinclaw” hybrid. While his seemingly limitless creativity and wisdom since his music career began in 1994 defines him as an intelligent Ravenclaw, we think the sheer courage taken to fittingly commemorate the legacy of former bandmate Chester Bennington makes Shinoda a full Gryffindor, those who stand up for others and do what is right. Wizards in the house of Godric Gryffindor are known for the same steady nerve and determination we see in Shinoda’s side project Fort Minor’s “Remember The Name,” brought full circle by the recent “Can’t Hear You Now.”

Set It Off’s guitarist and self-proclaimed Potterhead Zach DeWall has been sorted into house Ravenclaw, and we couldn’t agree more. Only a creative Ravenclaw could command the drastic genre shifts of the band since their vengeful first album, Cinematics, into the adventurous world of last year’s Midnight. Armed with the Ravenclaw-like wisdom of an artist twice his age, DeWall’s commanding contributions to SIO’s 12-year history crafted the likes of “Why Worry” and “Nightmare” into legacy-defining tracks while keeping the band’s ideas moving along with the scene around them. Ravenclaws are known for their spot-on intelligence, after all.

Machine Gun Kelly’s transformation into pop-punk trailblazer is complete, to the point where it’s hard to believe the same man is behind both “Wild Boy” and “forget me too.” Where MGK began his career in the public eye as the slick and cunning Slytherin-esque rapper, this year has transformed The Dirt star into a fully fledged courageous Gryffindor. The determination it takes to embrace all sides of his career has shifted the once self-centered Slytherin into a house where his adventurous persona truly belongs—among other Gryffindors known in the wizarding world for “doing what is right,” echoing the sentiments of “All I Know.”