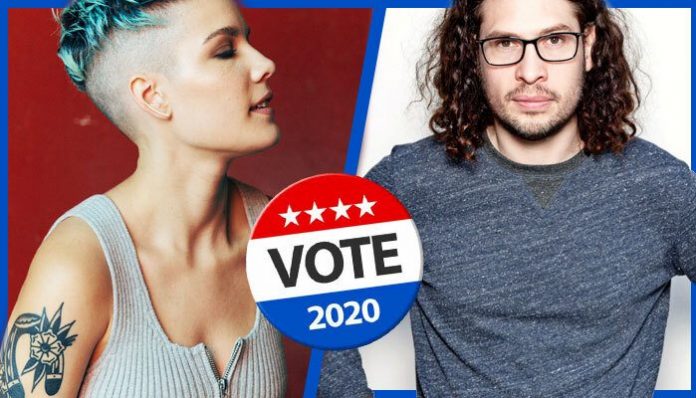 Today marks Election Day in the United States, where Democratic candidate Joe Biden and Republican incumbent Donald Trump are hoping to obtain or retain The White House. This election is unlike any other in many ways. Not only are we living through a once-in-a-lifetime pandemic, but we have also seen the current POTUS show signs of authoritarianism and emboldening white supremacists.

In response to this, many musicians are using their platforms to encourage fans to register to vote, cast their ballot and fill in a circle for Biden.

Read more: Here’s what Tom Morello thinks the Democratic Party can do better

On this contentious day in American history, artists are prompting their fans to get out to vote and share their “I Voted” stickers. Check out the list of musicians performing their civic duty this election season, and make sure to give Alternative Press’ Election Day 2020 playlist a listen below.

I am anxious. I’m sure you are too. This is a bandaid. But a necessary action. Empower yourself. Empower others. Empower the memory of those who didn’t have the ability to vote. For your ancestors and for your future. Sending Love. #BidenHarris2020 pic.twitter.com/WUDhVxwNqC

Halsey isn’t afraid to share her politics, both in her music and on her social media platforms. Prior to today’s election, she interviewed Sen. Bernie Sanders on various policies and why he’s voting for Biden. She is a Biden/Kamala Harris supporter for their promises of women’s rights, LGBTQ+ protections and more. She admitted, like many people in the States, that she’s anxious.

HOW DO U RATE MY VOTING STYLE pic.twitter.com/UXLRTxUgSS

Singer K.Flay turned in her absentee ballot early in October and had a dance party as she did so. Of course, she looked awesome as she dropped her letter in the ballot box in her Rage Against The Machine shirt.

Lady Gaga has been one of the most politically active mainstream musicians this year for Biden. She even appeared at his rally yesterday in Pennsylvania. She sent in her ballot in October and did it in typical Gaga fashion: in shiny platform boots.

When I think of our country I think of people, the American people. Us. I want a leader who has empathy; someone who works to understand others and someone to trust in. If you are like me then the choice today is clear. Go Vote! #HereComesTheChange #vote pic.twitter.com/qmKH2azSHA

Pop star and activist Kesha got out to vote this afternoon and tweeted, “If you are like me then the choice today is clear. Go Vote!”

For the love of god please vote!! Also…and this is very important..don’t forget to do your roots! pic.twitter.com/QtzOV5fxSs

Jack Barakat from All Time Low voted early this year and shared his “I Voted” sticker in October. Along with encouraging ATL fans to vote, he also gave some great hair advice.

Please vote Walking Bag of Shit, also known as Donald Trump, out of office. He is a stain on our country that has lingered for too long. Vote early, and if you can, get your friends and your family to vote too. We have all suffered enough. pic.twitter.com/g8v1mpkmTE

Ray Toro of My Chemical Romance sent in his vote in late October and encouraged fans to vote out Trump. “We have all suffered enough,” he noted in a tweet.

very fortunate to live in a country where i am able to vote for my future, along with what i believe to be the best future for the coming generations. hope all who were able to did the same. spread love today no matter what, rise above all that other shit and short-sightedness, be kind, be compassionate. love you all. i need my eyebrows trimmed.

All Time Low drummer Rian Dawson cast his vote today and reminded his followers to “spread love today no matter what, rise above all that other shit and short-sightedness, be kind, be compassionate.”

You heard Good Charlotte‘s Joel Madden. Make sure your voice is heard today!

The polls predicting Biden winning by these large margins are only correct if we actually show up to vote. We can tell whoever is collecting that data who we WOULD vote for but like…… we actually have to vote……. to make that happen. Are you following me here?

Former Real Friends vocalist Dan Lambton sees the polls and knows you see them, too. The only way to ensure a Democratic win is to vote.

Vote for Biden if you a real one pic.twitter.com/esljuXKvpL

Rapper and Cleveland native Kid Cudi sported his “I Voted” sticker this afternoon. Sport yours all day, too!

Broadside frontman Oliver Baxxter hit the polls bright and early this morning and shared his voting sticker. Did you get your sticker yet?

It’s really easy to make judgment calls when your life and your well-being isn't the one at stake. The impact of voting may seem marginal to you, but some people live within those margins and their lives are decided by those margins. Maybe it’s not all about you for once.

State Champs‘ Ryan Scott Graham shared some hard truths with his Twitter followers today. To people who don’t vote, it may seem like one ballot won’t change much, but that is far from true, and having that belief is a privilege. There’s still time to get your voice heard!

Waterparks and Awsten Knight know that the maps and polls all point to a Biden win but still hope their fans vote to secure a Democratic victory. Why take any chances today?

I just voted IN PERSON. It’s not too late. GET OUT THERE AND DO IT!!!

Thursday frontman Geoff Rickly went to the polls himself and assured us that there’s still plenty of time. Make sure you take his advice and hop in line ASAP.

Calling all Freaks: mask up&go vote!Your voice matters! Tag me in your post vote photo and I will retweet it as a showing of unity & celebration of our duty as Americans. Vote4you, vote4our futuregen,vote4love,vote4hope, vote4equality, vote4future Rock shows!! #VOTE #VoteAgainst

Lzzy Hale of Halestorm hopes you put on your mask and get to the polls if you haven’t already. There’s a chance she will retweet your voting picture, too!

Rock royalty Sharon Osbourne shared a photo of her wearing her voting sticker paired with a “VOTE” shirt to celebrate Election Day.

Today is so incredibly important. If you are of age, go out there and let your voice be heard. EVERY single vote matters and counts towards that final result. #Vote2020 pic.twitter.com/JPshnqGjk8

Set It Off singer Cody Carson posted a selfie proving he got out to vote and made sure his followers know that every vote counts. He even retweeted a few fans with their “I Voted” stickers.

Taylor Momsen, lead singer of the Pretty Reckless, got out to the polls and shared her “I Voted” sticker on her mask.

Foo Fighters made it to the polls today. Did you? There’s still time left in the day! Frontman Dave Grohl supports Biden and even chatted about education with Dr. Jill Biden.

But hopefully today is a step in the right direction. I want live music back too and I’m sure every artist, crew member, rigger, manager, venue owner and booker all feel the same way. Not only do we love music, but it’s how we survive in this world. Vote!

Jake Bundrick of Mayday Parade shared his concerns with his Twitter followers about the uncertain future of live music and where it could, unfortunately, lead if we have four more years of Trump. He encourages all his band’s fans to vote and said, “…hopefully today is a step in the right direction.”

Get more information on voting and upcoming elections from one of the below online resources:

You can check your polling place here, and make sure to wear a mask when you head out to vote.