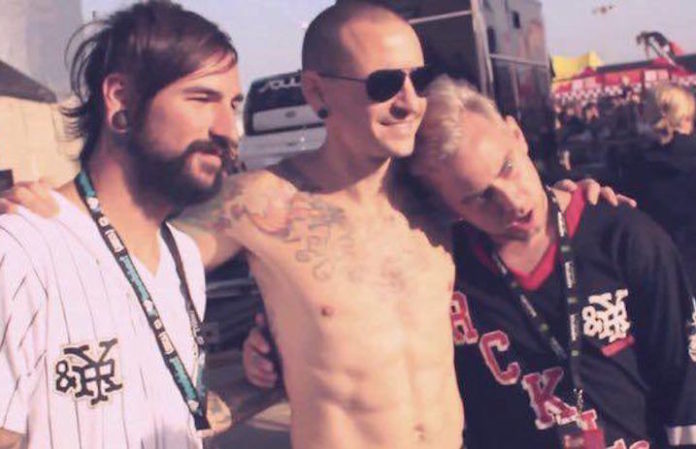 Chris Cornell's daughter Lily and mother-in-law Toni Karayiannis have taken to Instagram to pay their tributes to Chester Bennington.

Cornell and Bennington were close friends, bringing forth emotional statements from Cornell's family.

Lily posted a picture with Bennington, along with the caption, “I love you so much. Thank you for always being there for me and my family, thank you for being the kindest human being imaginable, and thank you for your legendary voice. There is a gaping hole in the world without you.

i love you so much. thank you for always being there for me and my family, thank you for being the kindest human being imaginable, and thank you for your legendary voice. there is a gaping hole in the world without you.

Karayiannis wrote, “I don't know who to cry first! He was like family, I consider him also like a son to me! Talinda is my girl! I'm in shock! Chester is family is friend a dear friend to Chris always and my heart bleeds for him for his children for his angel wife Talinda! A very very black day!”

The music world is mourning the loss of Linkin Park’s Chester Bennington, who has died at the age of 41.

Bennington joined Linkin Park in 1999, and the band had just released their seventh record, One More Light, earlier this year. See the way artists are honoring the musician below.

Shocked and heartbroken, but it's true. An official statement will come out as soon as we have one.

He was in one of the biggest bands on the planet yet went out of his way to make us feel welcome and respected when we played with them. ❤️ pic.twitter.com/R5Ph4cLx4w

Kevin Skaff (A Day To Remember):

Don't even know what to say. Rest easy

Too many artist in the rock community taking their own lives. Today is fucking terrible.

Jordan Fish (Bring Me The Horizon):

Absolutely devastated. His voice and band were such a huge, huge influence to me and so many growing up. RIP Chester https://t.co/553PYCJQwB

A double tap doesn't mean youre involved in your ppl's lives. Talk to each other, stop thinking it's uncool to reach out. Stop this loss.

I can't fucking believe it. Rest In Peace. If you know someone who's struggling, talk to them. https://t.co/4NnUVh7f6F

Heart goes out to @ChesterBe's friends and family. I hope you've found peace wherever you are, you'll be truly missed here.. RIP

Just heard that the singer of one of the bands ever, Chester B of @linkinpark, has passed. Incredibly sad news – condolences to family.

Man. @ChesterBe and LP were the first real rock band I ever listened to. I grew up dreaming of doing what they did and that's why I'm here.

the news can't be true. ive accepted a lot of things, but this one is too much…not Chester. not like this.

love you Chester. love you more than you know. music will never be the same without u…I'm honored to have shared these moments. �� pic.twitter.com/2YCtszgwXG

Mental health is no joke. We have to destigmatize the conversation around it.

We are deeply saddened by Chester's death. We loved him. Our condolences to Chester's family, Linkin Park, and all of their loved ones.