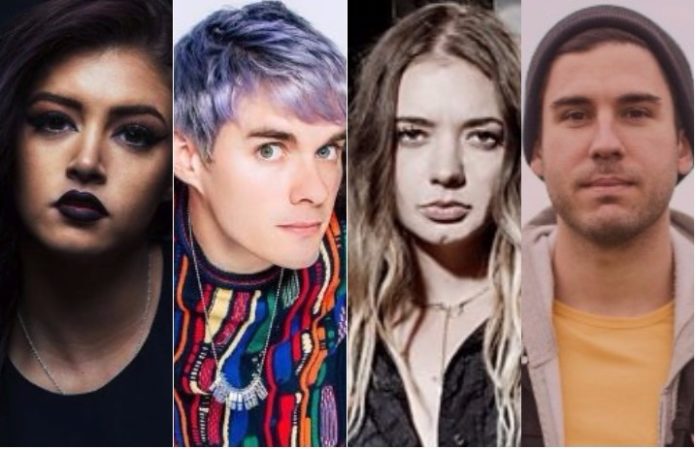 Because two Most Anticipated lists aren’t enough (ICYMI, we compiled our most anticipated heavy and alternative releases, and there are so many amazing albums to look forward to), here’s a third list—this time recommended by the bands and musicians themselves. From Moose Blood’s Mark Osborne to Waterparks’ Awsten Knight, find out which albums these bands will be spinning in 2018.

AGAINST THE CURRENT’s Chrissy Costanza is excited for… STATE CHAMPS

Against The Current’s record! [Laughs.] The State Champs record. I’m really excited to hear what they put out. I love those guys, and they’re some of our really good friends, so I’m excited to see what their new stuff is going to sound like.

Marmozets are a band that we’ve done quite a lot of shows with in the U.K., so it’s been really awesome seeing them grow up as a band. The first time we did a headline show in Leeds, it was their first ever show or something. You can only talk about it so much until you actually see a band, and it was one of those moments when we were like, “What the fuck? These guys are still in school and they’re, like, some of the best musicians we’ve ever seen before.” They were just tearing it apart. Me and Simon [Delaney, guitarist] are big Dillinger Escape Plan fans, and the early Marmozets stuff was some proper crazy tech shit. I don’t wanna say that it a Dillinger rip off in any way, but it definitely had elements of that within some of the songs. It’s been really interesting seeing their growth. When they put out their first album, they completely revamped their sound, and definitely that’s something that appeals to us. For me, I get really excited when bands take risks and are prepared to do something a little bit outside the box. I think I’ve only heard one song from the new album, and it sounds awesome. So, I think it’s gonna be super-exciting to hear that.

There’s a band called Owen that I really like—an acoustic act—he’s releasing new material in 2018. For me, personally, that’s probably what I’m looking forward to the most.

Does Radiohead have a new album coming out next year? I’d like to see what twenty one pilots will come up with next year.

MAYDAY PARADE’s Derek Sanders is excited for… THE DANGEROUS SUMMER

My most anticipated album as of now is the new Dangerous Summer record, which I’m pretty sure is coming out in 2018. I know it’s finished, and they’ve already released a song from it that’s really good. I love that band, and I’m really glad that they’re back together. They’re really good folks, and I’d love to bring them on a tour again.

The Don Broco record. They’ve always been a band that fully I respect but never really massively got into. I always knew they were good and put out good songs, but [it] never really got to that point that I was really excited to hear what they do next. I’m not being disrespectful or detrimental; they’re are a fantastic band. But the last four singles they’ve put out blew me away. The songs are great, and I don’t know of anybody else who’s making music like that.

Should I say State Champs? I am really excited for that record. We’re making that right now, and it’s been a really, really fun process.

There’s an amazing artist called Kim Churchill from Australia, and I really like his stuff. There’s a lot of amazing Australian bands coming out at the moment. There’s a lot of excitement going over that way. It’s a lot more acoustic stuff; it’s not like heavy rock, so it might be nice. It’ll be like,”here’s a nice chill album.” Hopefully he’s going to bring out another album, but I think some people need a bit of chill music in their life, don’t they?

I tell you what, I’ve heard some of the new Trophy Eyes demos, and they sound great. I think the Trophy Eyes record next year is going to be a big one.

Whenever PUP puts out a new record. We still jam their past two albums hard in the van. Awesome dudes with awesome tunes.