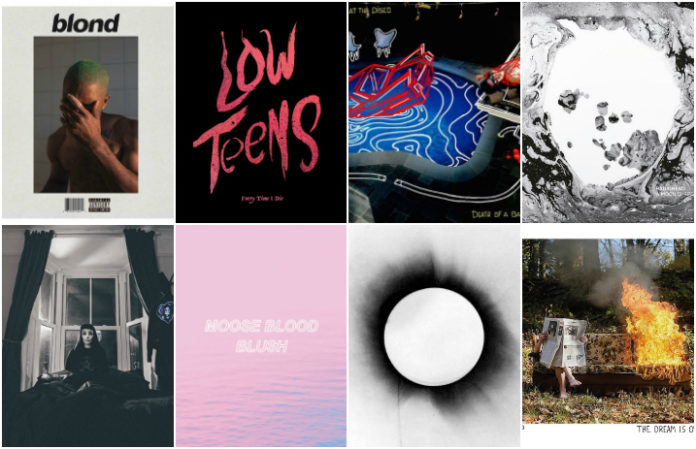 As of right now, either the new Banks record [The Altar] or the new Weeknd record [Starboy] have been my favorite of 2016. My first listen to [Starboy] I was like, “Okay, I don't hate it, but I need to listen to it again.” The second [time] I listened through, I was hooked on it.

Probably Radiohead’s new album, A Moon Shaped Pool. Great band, but I’ve never been like, a diehard fan. But my mum would literally text me, and all the boys were like, “You need to listen to their new album.” I love how they’re a great band, they keep bringing out great albums and great music. They’re authentic, they’re real. You can tell they’re bringing out music for the love of it.

Low Teens by Every Time I Die.

I remember when Blush came out this year, there was a tangible excitement in the U.K. for it because people of all kinds of musical backgrounds like Moose Blood. So, I’m going to go with Blush by Moose Blood.

The Stranger EP by Creeper. What's funny is that I was a fan of Creeper prior to us bringing them on tour. My crew mistakenly thought Creeper were doing all cover songs because they couldn't understand why warming up backstage, I would be singing all the lyrics to this opening band's songs!

TJ Horansky, Sleep On It

I really have been enjoying the new Into It. Over It. record, Standards. That’s up there for record of the year. I’ve also been listening to the new Microwave album [Much Love] a lot. That was incredible; they’re an incredible band. I know the guys in the band really like the Moose Blood record [Blush]; we’ve been jamming that a lot, too. We listen to that in the van a lot. Jake [Marquis], our guitar player, really likes the new Panic! At The Disco record [Death Of A Bachelor]. I think those are the top contenders for me, so far.

Light We Made by Balance And Composure.

Matt Tuck, Bullet For My Valentine

Avenged Sevenfold’s The Stage. I’m good friends with those guys, but they even snuck it past me!

I really like the Youth Code record, Commitment To Complications. They’re a great band.

I’ve been listening to Neurosis’ Fires Within Fires pretty much non-stop, and we’ve got Scott [Kelly, vocals/guitar] on our new record, too.

I loved the new Korn [The Serenity Of Suffering], and Avenged Sevenfold’s The Stage has been a huge deal for me. After the first two records, I stopped being the biggest fan, but I love that they stepped out of their box and are crushing it again with this one.

For me, PUP’s The Dream Is Over.

You know what I really loved? The Nothing record [Tired Of Tomorrow]. We’re taking them on tour, actually. I also loved the Slothrust album [Everyone Else], which came out a few weeks ago. It’s really cool.

I love the Regina Spektor album, Remember Us To Life. The new Bayside, Vacancy, is awesome; in punk rock music, it’s few and far between when bands grow musically. There’s a lot of diversity on that record. There’s a band from Nashville called Civilian that self-released a record, and that record is really cool.

Haven’t Been Myself by Too Close To Touch. I really like that album.