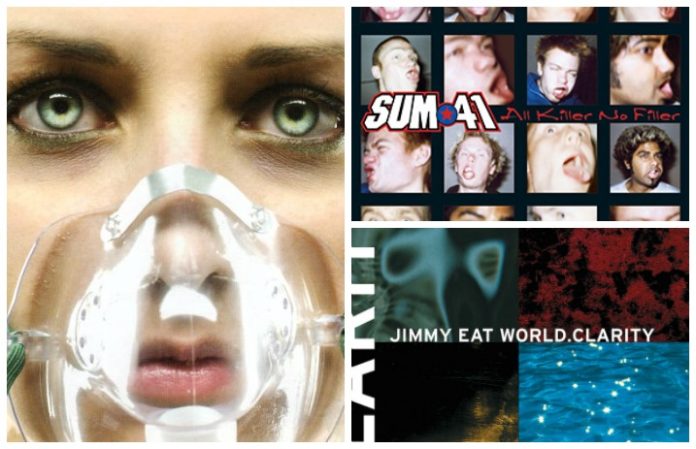 This is the one question guaranteed to elicit a “but that’s so hard!” from every single person asked—“What is your favorite album of all time?” But, here at AP, we don’t shy away from the tough questions. We asked around and got some diverse responses:

Good god. [Laughs.] These questions are getting in there. I don’t know, it’s so hard to say. What do I go back and listen to all the time? Well, there’s a couple albums I do like a lot that I always go back to. I like, I’m pretty sure the other guys will say this, Thrice’s The Illusion Of Safety. That’s probably one of our favorite records. Collectively, we always put that record on and know every single word. I love Saves The Day’s Through Being Cool and even Stay What You Are is one of my favorite records. It varies with genre. I love Underoath’s They’re Only Chasing Safety. I thought that was a great record that changed the way I look at music. Every record, I think that influenced me when I was younger is very important in the way I look at music and how we create music in general. I’ll take those—one of those records. [Laughs.] They’re good fucking records. I could put them on anytime, and just be like, “Cool, good choice,” and let it play. That’s how you know it’s a good record.

That's so hard! I'm probably going to say Reach For The Sun by the Dangerous Summer, just because, it's not necessarily the album I always go to, but it's the album I've been with the longest. It always comes back to me. Every song has something that speaks to me in it.

That is so hard because I love so many albums. I know, everyone says that. My most replayed album is They're Only Chasing Safety. It's funny, right when they announced the Rebirth Tour, I bought a ticket for a city I didn't even live in, 'cause I was planning on just going. Then I ended up not being able to go since I was on tour, but one of those tour dates [we were] playing a festival in Texas with Underoath, so that was great.

Jimmy Eat World, Clarity. I think that was the first record I found that really connected me to the emotional integrity of music, which is obviously now, where I am as an artist, the driving force behind what I do. It's the record that introduced me to that.

I really like the MxPx album Panic when I was a kid. That album all together was just so fucking good. But the new Story So Far album, the [self-titled] album, front to back, is just…so fucking good. It's impossible! That's my answer, but it's…unanswerable