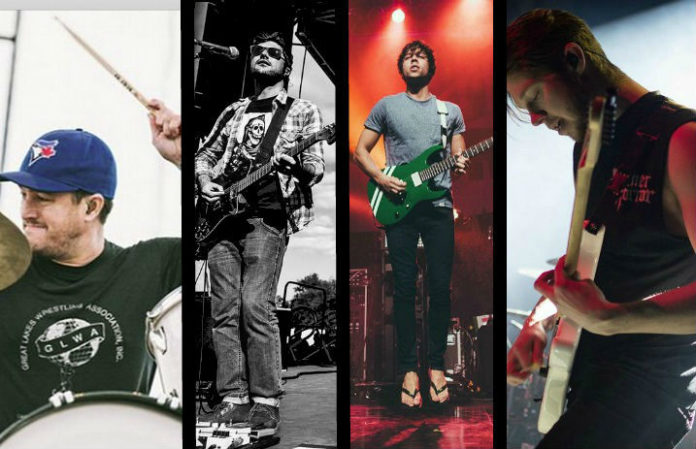 John Nolan has seen venues and crowds in all shapes and sizes all across the globe with Taking Back Sunday.

This atmosphere, however, brought nerves he never dealt with before.

Nolan was all alone on the field. No guitar, just him crooning “God Bless America” a capella while a jury of thousands of New York Mets fans judged from the stands of Citi Field two years ago.

“… But it was amazing, as a lifelong Mets fan, to be down on the field singing,” he says. “It was one of the coolest things I’ve ever done.”

Baseball blends beautiful partnerships, and it has a special relationship with music, from the universal seventh-inning stretch anthem “Take Me Out To The Ball Game” to Red Sox’s use of Neil Diamond’s “Sweet Caroline.” Players even get in on the action with their walk-up music, and while hip-hop and country dominate, every once in awhile, an August Burns Red song slips through.

Players like Dodgers pitcher Brett Anderson and Diamondbacks catcher Chris Herrmann have shown their love for ABR by warming up to “White Washed” or rocking “Fault Line” as their walk-up.

“Obviously there are a lot of metal fans in baseball, and we’ve been lucky enough to have a few of them get turned on to us and like what we do,” says August Burns Red guitarist JB Brubaker.

“A lot of respect for [them] using our [songs],” Brubaker says. “That is really cool.”

The right tune is crucial. Ever-rising superstar Bryce Harper of the Washington Nationals aptly borrows Frank Sinatra’s “The Best Is Yet To Come” for his walk-up routine. Lorenzo Cain using Fetty Wap’s “Trap Queen” became an unofficial anthem for the Kansas City Royals in their World Series title run. And Thor may be a Jon Snow fan—Mets pitcher Noah Syndergaard warms up to the Game of Thrones theme.

Then, there are moments like Thrice drummer Riley Breckenridge and current Baltimore Orioles slugger Mark Trumbo forming a friendship through music and baseball intertwining. Trumbo, then with the Los Angeles Angels, was a fan of the band, and the feeling was mutual with Breckenridge. Soon after, “Firebreather” became Trumbo’s music at the plate.

“Super cool. When I was growing up, my dream was to be on the field at Angel Stadium playing for the Angels,” Breckenridge says. “I guess hearing one of our songs playing over the PA [there] is the next best thing.”

The relationship between the two scenes doesn’t just stop at the way players use songs—baseball is a reliever for these bands on the road, as well.

Miss May I’s Justin Aufdemkampe is operating under the ‘gotta catch ‘em all’ philosophy when it comes to ballparks. He made a day trip out of tour routing from New Jersey over to New York just to cross Yankee Stadium off his list.

“I have this thing where I’m trying to hit every ballpark in America at least once,” Aufdemkampe says. “I haven’t been to a ton of them, but [of] the ones that I have been to, Yankee Stadium was pretty cool.”

Cincinnati Reds fandom trickles down through generations of Aufdemkampe’s family. He remembers the Reds cups and pennants hanging in his grandmother’s house.

Aufdemkampe was born in 1990, the last time Cincinnati won the World Series. He played baseball as a youngster and shares his passion for the Reds with bandmate Levi Benton—though the Reds have offered little to rave about in their lifetimes.

“My dad is a huge Reds fan, too, so I’ll call in every now and then,” Aufdemkampe says. “Usually he’s complaining about it because they’re losing or doing something stupid.”

To fans like Aufdemkampe or Breckenridge, baseball is an essential part of life. While the rap sheet on baseball is a stubborn one—too slow, too boring, too complicated—to fans like them, the nuisances are the beauty.

Breckenridge hopes to plant the seeds of fandom early in his son, who was born this past August.

Until then, Breckenridge passes along his baseball analysis/stabs at humor on the @ProductiveOuts Twitter account and The PRODcast podcast, both joint operations with fellow musician Ian Miller. Both are must-follows.

As for Brubaker, the subtle strategies like pitch types, hitting mechanics and defensive shifts are what he feels makes baseball fascinating.

“There are so many little games within the game,” Brubaker says.

He even uses those adjustments as a part of the selling points to potential fans on the proverbial fence.

“Then if that doesn’t work, I say, ‘Well, the game is basically designed so you can hang out, have a few beers and pay attention when something happens,’” Nolan says. “Let’s just hang out and talk, and if something happens, we’ll stop and watch.”

A new season means it’s the perfect time to start watching. You could help Nolan cheer on the Mets as they vie for another trip to the World Series or join Brubaker’s Phillies on the ground floor because even Drake had to start from the bottom. Even Aufdemkampe admits his Reds are probably there, too, but he reserves some cautious optimism. (“Every year there is usually a team that kind of comes out of nowhere,” he says.) Another option is to take the Breckenridge pathway and celebrate the individual influx of young talent transforming into the next crop of Hall of Famers.

But back to those walk-up songs. If you need one of your own—or just a melodic boost of energy until you can get to that first coffee of your choice—our baseball aficionados leave you with their lineup, one choice from their band as well as someone else’s song they would use before stepping to the plate:

Brubaker: “The Truth Of A Liar,” August Burns Red; “Wake Up,” Arcade Fire

Nolan: “What’s It Feel Like To Be A Ghost?” Taking Back Sunday; “Seven Nation Army,” the White Stripes.