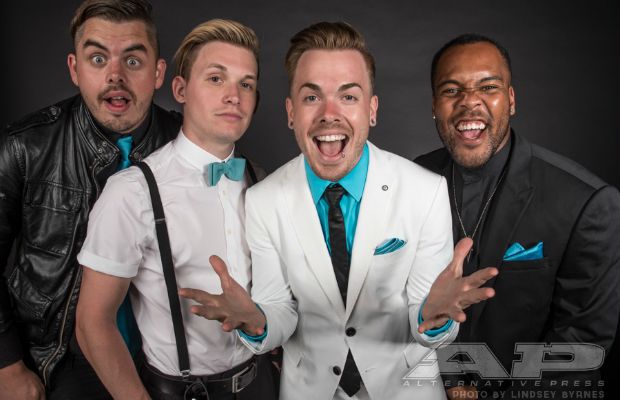 Brace yourself. NFL is here.

Just in time, too, for those of you tired of mapping out Game of Thrones conspiracy theories while waiting for next season, tired of Donald Trump’s presidential candidacy or tired of actually using your Sundays to clean your room or do laundry or yoga or really just anything that involves moving off your futon. Thank you, NFL, for this distraction.

There is no battle for the Iron Throne of American sports supremacy–when 114 million people tuned in for the 2015 Super Bowl between the New England Patriots and Seattle Seahawks, the NFL was re-elected king. The league has ingrained itself in our livelihoods.

“It was like the one thing that–literally my mom, my dad, my brothers, different cousins, aunts, uncles–we would all be watching the game, always,” says the Word Alive vocalist Telle Smith.

Smith said his first memory comes from when he was 4 years old, sitting with his father watching a Dallas Cowboys game on TV.

“I am a fourth generation Dallas Cowboys fan,” Smith says. “It is my entire family, with the exception of a couple uncles who fell off the wagon.”

Here is a look at how other musicians found their favorite NFL squads:

Set It Off vocalist Cody Carson is from Tampa Bay, but his father was born and raised in Pennsylvania. The Eagles rubbed off on Cody.

“I was really young. I knew his passion. Eagles fans have this characteristic–they’re passionate,” Carson says. “We take the game so seriously. We’re all so frustrated because we haven’t won a Super Bowl yet.”

Carson is the proud owner of the jerseys of past Eagles, including LeSean McCoy’s and DeSean Jackson’s. He is not an equal opportunity fan. The Cowboys are poison to his ears.

“God no. Why would you say those dirty words to me?” Carson says.

The family fandom was passed down to We The Kings guitarist Hunter Thomsen, too.

“My father is from Massachusetts,” Thomsen says. “I was raised on Patriots and Bruins and Red Sox.”

Thomsen is riding high after New England captured its fourth Super Bowl in the past 13 years this past February. Any criticism of Tom Brady, or mention of Deflategate or the pressure of a football “doesn’t matter because they crushed the Colts,” Thomsen says.

Thomsen tamed any urges to boast about defeating Seattle in the Super Bowl, however, knowing the Seahawks were one Marshawn Lynch-yard away from a Skittles celebration and a victory.

“I was pretty reserved about it, because we could have easily lost it, as well,” Thomsen says. “I was literally biting my nails, couldn’t open my eyes.”

The NFL season may mercifully end for Beartooth bassist Oshie Bichar in an abbreviated four months. As a Cleveland Browns fan, he has come to terms with almost yearly regular-season ineptitude.

“It’s just a family thing. I’ve pretty much always been raised as a (Ohio State) Buckeyes fan and a Browns fan,” Bichar says. “It’s tough to be a Browns fan my whole life. It takes a toll on you.”

The Browns have produced one winning season in the past decade, and have not made the playoffs since 2002. Bichar painstakingly watches anyway, just in case.

“I’m the kind of person that will definitely sit through the entire game, no matter how bad it’s going,” Bichar says. “I’m so used to the losses. If anything miraculous does happen, I want to be able to experience it.”

When in doubt, use your favorite cartoon to select your NFL team.

“I asked my mom recently –why did I grow up an Eagles fan? I’ve been a fan ever since I can remember,” says August Burns Red bassist Dustin Davidson. “I had pictures, an Eagles locker, a Randall Cunningham jersey. I always knew it was because I looked up to my cousins.”

Family helped sway Davidson toward Philadelphia. So did Michelangelo, Donatello, Leonardo and Raphael.

“My mom also told me I like the Eagles because they’re green–just like the Ninja Turtles,” Davidson says.

Davidson’s Philadelphia jersey goes on tour with him, but he keeps it stowed away when the band hits Dallas.

“I’d probably think twice about wearing it in Dallas, because I don’t want to stir the pot,” Davidson says. “[In] Dallas, I think there are some guys that would legitimately try to hurt me.”

Every NFL season brings change and more plot twists than the Night’s Watch could protect against. When you think you know, you know nothing.

Traynor sees Buffalo making a leap up the standings under new coach Rex Ryan and new running back LeSean McCoy. Thomsen is in awe of Green Bay quarterback Aaron Rodgers. Carson says the Colts’ offense is simply “insane” with the additions of Frank Gore and Andre Johnson. Davidson kinda-sorta-maybe thinks Eagles coach Chip Kelly now has his shit together after a massive overhaul of the roster this offseason.

“I don’t know if he knows. [Laughs.] I trust in Chip,” Davidson says. “At the end of the day, I have to believe he knows what he’s doing. He works with them, and he knows what’s right with his offense.”

So who hoists the Lombardi Trophy at the end of the season? The prognosticators make their picks:

Cody Carson: Seahawks over Colts  “Of course I want it to be Eagles-Colts.”

Dustin Davidson: Eagles over Patriots “I’m biased, but I have to say this is the year for the Eagles.”

Matt Traynor: Colts over Packers “I think Andrew Luck might actually get his.”

One of those picks may look brilliant five months from now. A few may need to be buried in a far corner of the internet to avoid embarrassment. The beauty in the NFL, though, is everyone has a chance at the throne.

Except the Browns. The Browns have no chance. Sorry, Oshie.