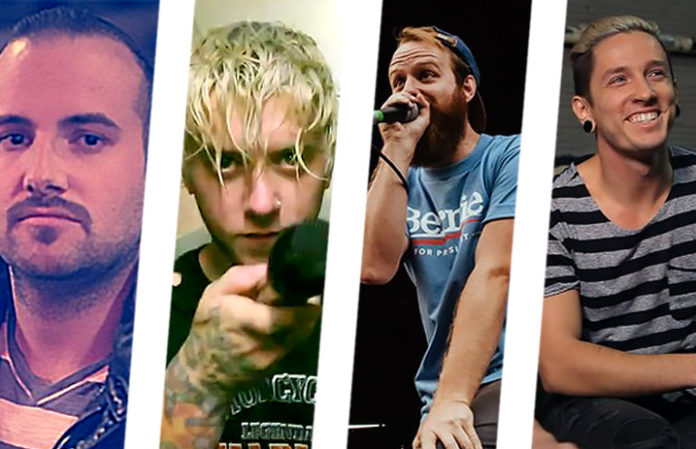 The Super Bowl matchup between the Denver Broncos and Carolina Panthers presents a  problem for Breathe Carolina: Despite the band’s name, Colorado is home, and the Broncos are adored.

“We’re going to switch out the socials to say, ‘Breathe Colorado,’” jokes vocalist David Schmitt. “We’re rooting for our home team, but at the end of the day, I can’t be mad if it’s the Panthers.

“I’m just honestly glad that it’s not the fucking Patriots or Seahawks.”

Instead, this year features fresh blood as opposed to recent champions. Carolina entered the league in 1995 and lost its only other Super Bowl appearance in 2004, against the Patriots. Denver makes its eighth visit, appearing as recently as two years ago, but  haven’t won since back-to-back championships in 1997-98.

“What we got this year is a game that I feel you deserve as a football fan,” says the Wonder Years frontman Dan Campbell. “Both No. 1 seeds playing in the Super Bowl. The two best teams in the NFL, that have proved that over the course of the season.”

Denver features the Nationwide-jingling, Papa John’s pizza-slinging, future mayor of Omaha Peyton Manning as quarterback. Manning has received plenty of criticism this season—some valid, some not. His passes have the velocity of a minivan and the accuracy of a blindfolded archer. Injuries and ineffectiveness relegated him to clipboard-carrying duties for six weeks in favor of 2012 draft pick Brock Osweiler. Manning will turn 40 in March, and retirement rumors swirl.

“I’m afraid that if he doesn’t win, he’s going to come back next year and die on the field in a [Houston] Texans uniform,” Campbell says. “He’s going to go down as one of the greatest quarterbacks of all time. Win [or] lose, I hope this is the last time we see Peyton Manning on the football field.”

Manning came out of reserve to replace Osweiler and lead the Broncos to victory before guiding the team to  playoff wins over Pittsburgh and New England.

“He does get criticized for his physicality a lot, but regardless of all that, he’s still the general of the field. He has a good way of keeping everyone going,” says Breathe Carolina drummer Eric Armenta. “He has a lot of experience in these types of high pressure situations.”

On the other side, Carolina features the boisterous, charismatic and league-MVP favorite Cam Newton.. He threw for 35 touchdowns with an anonymous batch of wide receivers while rushing for 10 more scores.  He is Carolina’s Superman, dabbin’ for skeptics and true believers alike.

“I actually like Cam Newton and the way he plays,” says the Word Alive singer Telle Smith. “I think it’s awesome how he plays like a little kid. I like that he plays—not less serious, but you can tell he’s having fun.”

Since we’ve reached halftime of this column, let’s take a second to  cue up “Yellow” from Coldplay, this year’s entertainment.

“I think it’s kind of nice to have–I don’t know what you want to call Coldplay, light rock or what you classify them as–but I believe they’re true artists,” says August Burns Red singer Jake Luhrs. “I believe they write great material.”

Luhrs appreciation of Coldplay’s booking turned to hesitance when asked what it would be like if his own band provided that halftime entertainment. “I think that would bring a lot of crickets, man,” Luhrs says.

But to many, Coldplay bring mixed emotions, so what if we could fantasy book the Super Bowl? We asked artists who they’d like to see perform:

Dan Campbell: letlive. “I would like to see how incredibly shocked and bummed out everyone in the stands would be when Jason (Butler) is climbing up the stands and backflipping on them.” … Or Paramore. “Just watching the command they have in a room, the production they have and how they work with the production–they’re phenomenal at it.”

Eric Armenta: Lil Wayne. “Or anyone at all, I would resurrect Biggie from the dead and have him play.”

Jake Luhrs: Every Time I Die. “I’d probably be in constant joy and just laughing the whole time.”

Telle Smith: Linkin Park. “Chester [Bennington, singer] is one of my bigger influences personally. If I could hop in there and get on a song with them, I wouldn’t be mad at that.”

While the quarterbacks draw most of the attention, the Broncos and Panthers are here because of impenetrable defenses.

“I think it’s going to be a great game,” Campbell says. “Two of the Top 5 defenses in the NFL, one of the top offenses.”

For the Broncos, they rely on former Kansas Jayhawk cornerbacks Chris Harris, Jr. and Aqib Talib to shut down the passing game. The bulldozing rush up front from linebackers Von Miller and DeMarcus Ware significantly shortens the coverage clock for Harris and Talib—Denver recorded a league-best 52 sacks in the 2015-2016 season.

As for the Panthers, Josh Norman has emerged as a shutdown corner in the secondary and helped the team snag a league-high 24 interceptions this year.. Up front, tackle Kawann Short stands tall on the line, while aficionados Luke Kuechly and Thomas Davis patrol linebacker posts.

We asked our panel of artists to pick their winners, and it seemed for many the allure of Manning riding off into the sunset with a Super Bowl trophy on a corporate-sponsored horse swayed them.

Armenta: Denver, 35-28. “Obviously rooting for the Broncos, but Cam Newton is incredible.”

Schmitt: Denver, 24-17. “I think Denver is going to beat them down. They’re not used to that kind of defense.”

Luhrs: Carolina. “Spread by two touchdowns… The second, third and fourth (quarters) are going to be a battle for the Broncos, and I can see Cam Newton and all his light and glory going for a couple touchdowns.”

Smith: Denver. “I’d say that Carolina will be up 34-31, let’s say, and Peyton Manning comes down with under a minute left and scores the game winning touchdown throwing to, let’s say, Ronnie Hillman. If that happens, I deserve to win the lottery.”

Campbell: Carolina, 28-17. “I love the way Cam plays the game. He just plays like he’s actually having a good time. I’ve always been pro-celebration, pro ‘athletes enjoying themselves on the field.’”

Regardless of the outcome of the game, everyone goes to bed Sunday as a winner–Beyonce is scheduled to help out with the halftime show.