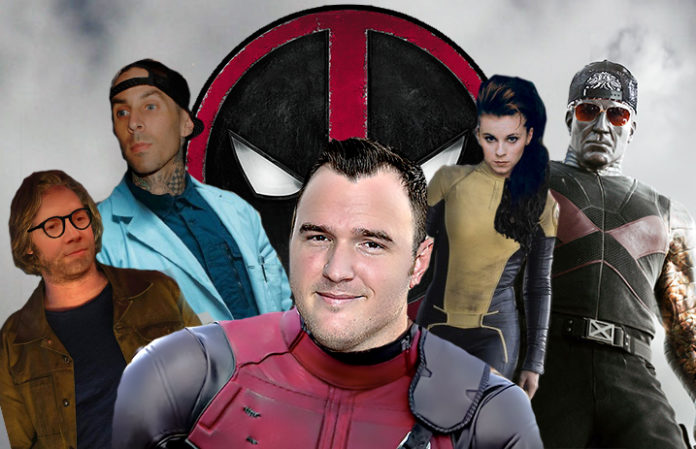 Deadpool is the bad-mouthed, badass, ex-mercenary science experiment gone wrong. But only if you consider a $132 million box office weekend to be “wrong.”

Deadpool is the one of the few R-rated superhero movies. After a brief (and rather awful) appearance in X-Men: Origins—and 11 years of Ryan Reynolds pushing to shoot an actual Deadpool film—the comedic superhero finally slashed (yes, with two katanas) his way to the big screen. The movie didn’t take any shortcuts: there’s plenty of fast-paced action, enough profanity for a high-schooler to enjoy and a sex montage. Yes, that’s right. A sex montage.

Reynolds absolutely kills it, earning praise from Marvel Godfather Stan Lee, who said “[Reynolds] was born to play this role.” Sheesh, quite the compliment. So in honor of our super funny superhero, we put together a list using some our favorite musicians to double as characters from the Deadpool movie.

The villain you can find under your sink; Francis Freeman conducts the experiment on Wade Wilson (Deadpool) in an attempt to cure his cancer and make him a “superhero.” Good news is, the experiment worked. Bad news is, Wilson’s (Deadpool) face looks like “an avocado had sex with an older avocado.” Barker would be the perfect Ajax. It’s rare to catch him in full smile, and he certainly doesn’t look like he cares much for any funny business. Don’t worry, Travis. We don’t think you’re a villain. But in this case, you would make one hell of a mad scientist who isn’t afraid to fight back.

Colossus is a part of the X-Men. He’s strong, made of metal and has a serious Russian accent. In Deadpool, Colossus serves as an ally to Deadpool. Actually, he’s kind of like a gentle giant/guardian-like figure. With colossal fists. (Pun intended.) M. Shadows would be great as Colossus—biceps and tattoos and all.

A mouthful of a name, huh? Negasonic Teenage Warhead is Colossus’ adolescent rebel sidekick. She also serves as a target for a handful of Deadpool’s jokes—sorry Lyndsey! Gunnulfsen has this rugged look that’s equal parts charismatic and insurgent. Spoiler: Negasonic Teenage Warhead’s powers could arguably trump the rest of the crew’s. But that’s why she’s a pivotal character and we laugh at her name with caution.

Weasel is Deadpool’s best buddy, toting just as many sharp jokes as the man in black and red. Played by T.J. Miller in the film, he is the comical friend. In the comics, he’s actually Deadpool’s arms dealer, although we don’t see Miller handling many guns in the film. Pierre Bouvier matches the humorous intensity of Weasel and certainly seems suitable of best-friend duties. He and his band have never shied away from a good joke, which makes him a perfect candidate to assist Deadpool in cursing and decapitating.

Last but not least, our hero, the “Merc with a mouth.” He’s one of the most unique superheroes to date. Vigilant and vulgar, we think Chad Gilbert would make the ultimate Deadpool. He’s quirky and he definitely has Wolverine-like healing powers, right? Knew it. Besides, spouse Hayley Williams, would double as an excellent Vanessa, Deadpool’s girlfriend. They’re a dynamic duo in real life but in the Marvel universe? Vanessa and Wade status. Plus, who wouldn’t want to see Gilbert rocking out in some tight leather?

Sounds like we just gave away a whole bunch of great costume ideas. In the words of Deadpool himself: “Ahhh. I’m touching myself tonight.”