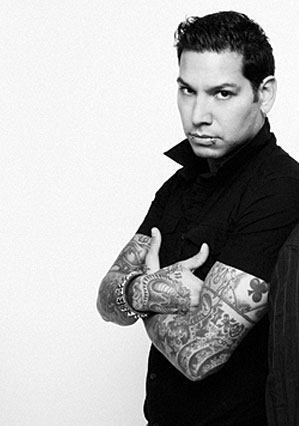 The breadth of influences MXPX carry has always been expressed through their cover songs, both live and on record: Ramones, the Descendents, Dead Milkmen and… Queen? The pop-punk band tackle all of them and more on their newest album, On The Cover II. While the first installment, 1995's On The Cover EP, featured takes on acts as disparate as Buddy Holly and a-Ha, the long-awaited sequel tackles familiar hits like Belinda Carlisle’s “Heaven Is A Place On Earth” (featuring Tsunami Bomb's Agent M) and the Clash's “Should I Stay Or Should I Go.” BRIAN SHULTZ recently caught up with frontman MIKE HERRERA, who was on his way to SXSW to play with his alt-country side project, Tumbledown, to discuss the inner workings of the album and why it's so significant that Queen's “Somebody To Love” was released in 1976.

What spurred the idea to do a sequel to On The Cover ?
Well, we do a lot of covers live–always have. We had a few that we really liked [but] hadn't recorded yet, and the fans were always on the message boards talking about, “Hey, you should do another covers album.” We try to listen to what the people want, and give them a little taste, so we decided to do it. It kinda made sense to do it now.

Was it a challenge to arrange all the collaborations with the likes of Agent M and Craig Owens?
Yeah, definitely. Luckily, we kind of gave ourselves plenty of time to do it. It took [a lot of planning to see] if people could do it or wanted to do it, or if they had time. With Agent M, we had asked her to do it and she'd been on tour at the time and was like, “Yeah, I can do it. Just give me two weeks when I get back from tour.” And we were like, “Perfect.” Because, at that point, we were pretty much still working on the record. The record did take longer because of that, kinda having to wait for some of the collaborators to get in their parts, but I think it always takes a while to get something done right. We were pretty happy with how it came out and who contributed to it.

What made you throw in the bit of Cheap Trick's “Surrender” at the end of the Proclaimers’ “I'm Gonna Be (500 Miles)”?
We actually know all of “Surrender”; we've covered it a few times. But it's kinda one of those songs where not everybody knows it–people know the chorus really well. So, we were like, “What can we do?” We love that song so much, so we ended up doing that part at the end of “(500 Miles)” and people love it. They're like, “Oh, I know this song!” But they don't have to know all the lyrics to it. It kinda just happened. We do it live that way, so we're like, “Well, let's do it exactly the way we do it live on the recording.”

Does the pressure of not butchering a cover song ever outweigh the pressure of writing an original one?
Yeah, actually. This album, we originally had sort of thought, “Hey, let's just do this cover album. It's gonna be our favorite songs. We'll have to learn the ones we don't really know that well, [but] we'll just bang it out and it'll be done.” [Laughs.] It ended up being just as involved as recording a full-length regular MxPx record–if not a little bit more so. I don't know if the pressure is the same, because we kinda just do what we do and if people like it or they don't, whatever. It really was a challenge for some of the songs, especially [Queen’s “Somebody To Love”]. I was sitting there when we were putting it together going, “I don't know how we're gonna make this sound halfway decent,” because it's such a hard song to do. I grabbed the acoustic guitar, and I kinda broke it down to the basics of the song, and it was as if I had just written a song, in a way, because I write all my own songs on acoustic, for the most part. So I kinda just translated it from that and reinvented it.

Were there any songs that you specifically tried to adapt to fit your own style and aesthetic?
On [Ramones'] “My Brain Is Hanging Upside Down (Bonzo Goes To Bitburg),” we changed a lot of the dynamics of that. Obviously, we've covered other Ramones songs; a million people have heard us cover Ramones songs. We wanted to do it true to Ramones, yet give it something a little bit different. The Ramones are pretty much straightforward, balls-to-the-wall, four-on-the-floor kind of rock 'n' roll. We kinda wanted to adapt a dynamic to it, a little bit of something that wasn't there, and at the same time strip away some of the stuff that was on the original recording. We didn't actually have some of the extra samples and stuff like that. I think we just tried to do it as we would [normally] do it–how we know how.

Did you consciously try to make the album a mix of more punk and rock-oriented bands?
I think it just ended up that way. Actually, I wanted to do Black Flag’s “Jealous Again,” but it just didn't happen. We never got around to it; it got put on the backburner. We also didn't want it to be all punk rock. But, like, “Punk Rock Girl,” that's one of those songs we always really, really wanted to do. Dead Milkmen are part of the reason why I create songs [and] why I play bass. I love those bass lines so I'll always love that song. We kinda just ended up going with what works. We chose a lot of songs that didn't make the record. We had scattered ideas. We'd start working on something, and kinda worked at it till we had what you hear.

It keeps being said that this album was based on the ’80s, but that Queen song was released in 1976.
Yeah, basically, that song wasn't gonna be on the record, but we liked it so much that we're like, “Well, it's supposed to be an '80s record, but let's just put it on anyway.” [Laughs.] So, yeah. Whatever. Sue us.

When will the band begin work on the next proper full-length?
That's a good question. We've talked about it. Right now I'm on tour with Tumbledown. That's what I've been doing alongside [On The Cover II], so I haven't even really been thinking about a new MxPx record yet, but I'm starting to. I've got about six or seven new songs written and, you know, we need a lot more than that to think about getting in the studio. So I'm gonna keep writing. Usually, when MxPx have somebody else produce a record for us, I have time to write, but with On The Cover II and Tumbledown, I've been doing the producing myself, and twisting knobs and stuff. So I haven't had much time to create or write too much. So, hopefully, [soon]. alt