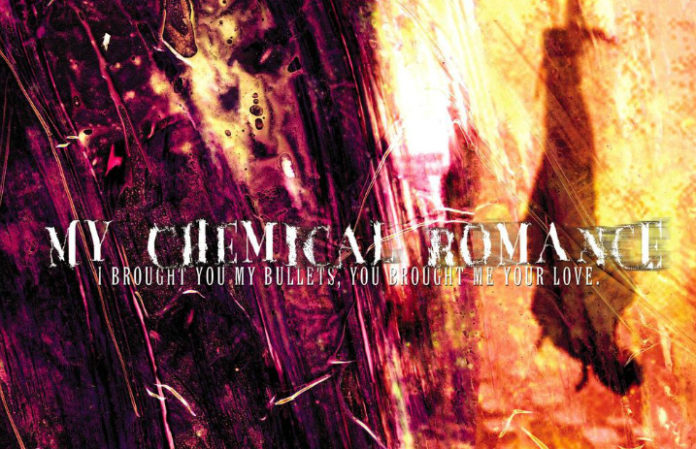 Fifteen years ago, a scruffy band of punks emerged from Newark, New Jersey, armed with an album that would change the scene forever. That band was My Chemical Romance, and their debut LP, I Brought You My Bullets, You Brought Me Your Love, was the first step in a musical career unlike anything we’d ever seen before.

From grandiose gothic anthems (“Vampires Will Never Hurt You”) and tender ballads (“Early Sunsets Over Monroeville”) to rip-roaring punk jams (“Headfirst For Halos”) and solo instrumentals (“Romance”), this album — and this band — had it all. Here are some facts about each of the songs on this modern classic you might not know:

Read more: Hear first audio release of My Chemical Romance’s “Every Snowflake Is Different (Just Like You)”

I Brought You My Bullets, You Brought Me Your Love’s opening track, “Romance,” is the only instrumental piece of music the band ever released, and its origins purportedly lie in the 19th century. A style of parlour music associated with Spain and South America, its original composer is unknown; but despite not being written by the band, “Romance” provides a perfect, eerie opening to the album and sets the scene for My Chemical Romance to explode into life on track No. 2.

2. “Honey, This Mirror Isn’t Big Enough For The Two of Us”

The video for “Honey…” is pretty unsettling and follows a storyline inspired by 1999 Japanese horror film Audition, in which a man interviews a series of women with the hopes of finding a wife, before one of the women tortures him and cuts off his foot. Sounds lovely, doesn’t it? It makes sense as the inspiration for the video, though, as Gerard Way and co. have often spoken of their love for the horror genre.

3. “Vampires Will Never Hurt You”

Probably the best-known song from the album, “Vampires Will Never Hurt You” tells, rather unsurprisingly, a story about our bloodthirsty friends. Before starting the band, Way had been working on some comic ideas revolving around vampires, but after leaving his job as a writer, he decided to take those ideas and apply them to some of the songs on My Chem’s debut, including “Vampires Will Never Hurt You.”

The band seldom played this song live, and it turns out there are multiple reasons for that. In a Reddit AMA in 2014, Gerard Way explained that not only was the track personally difficult for him to perform live given the subject matter, but also when the band did play “Drowning Lessons,” things would always go wrong. “Various stuff would go wrong, from starting the song at different times, to amps and drums breaking.”

A fan-favorite throughout MCR’s lifetime, “Our Lady Of Sorrows” remained on rotation in the band’s set until their split in 2013, with My Chem occasionally offering fans to vote, mid-set, on which song they’d rather hear: “Our Lady Of Sorrows” or The Black Parade’s “House Of Wolves.” Only “Vampires Will Never Hurt You” and “Our Lady Of Sorrows” from I Brought You My Bullets… were getting airtime at MCR shows at the time of the band’s breakup, and both were played at their final gig at Bamboozle 2012 in New Jersey.

Despite its OTT intro and upbeat instrumentation, “Headfirst For Halos” is a song that gets pretty dark, with Way’s lyrics tackling his addiction to pills. “The red ones make me fly/And the blue ones help me fall/And I think I’ll blow my brains against the ceiling,” he sings. Still, the album’s midpoint at least ends on a (kind of) happy note, with Way imploring us to “Think happy thoughts.” PMA, folks.

My Chemical Romance were famously formed in the aftermath of 9/11, with the terrorist attacks serving to shake Way into doing something important with his life. What you might not know, however, is that “Skylines And Turnstiles” addresses the destruction of the Twin Towers directly:

“We walk in single file/We light our rails and punch our time/Ride escalators colder than a cell/This broken city sky/Like butane on my skin/And stolen from my eyes
We can’t close the lids/On burning eyes
Steel corpses stretch out towards an ending sun.”

Way sings these lyrics, capturing both the futility of nine-to-five life and the devastation caused when it all comes crashing down. “Can we still reclaim our innocence?” he ponders at the song’s climax, before espousing a line that sums up the hope MCR brought to so many: “If the world needs something better/Let’s give them one more reason now.”

This was the first song Way wrote for MCR, according to their live album Life On The Murder Scene, their manager, Brian Schechter, said it was Way’s way of working through it: “I had that song about September 11th… kinda my way of getting over it.”

Inspired by George A. Romero’s classic 1978 film Dawn Of The Dead, “Early Sunsets Over Monroeville” tells a love story against the backdrop of a zombie apocalypse and is another example of how MCR sought to blend horror with music on the album. “Not knowing you’d change from just one bite/I fought them all off just to hold you,” sings Way.

Thursday’s Geoff Rickly both produced I Brought You My Bullets… and lent his vocal talents to the album. Thanks to a video released by the Nada Recording Studio, you can watch Rickly recording vocal harmonies for “This Is The Best Day Ever” right here.

Often requested but rarely played, “Cubicles” never got much of a chance live. And after Way shared his retrospective thoughts on I Brought You My Bullets… in a series of posts on Twitter, we now know why: “[It’s] really hard to play live,” Way revealed, adding that he thought the song was “real good” and that he understands why people always asked for it live. Fingers crossed that when (not “if”) that reunion happens, “Cubicles” gets its moment in the limelight.

The album’s final track, “Demolition Lovers,” is yet another example of how MCR’s penchant for the cinematic was present in the band’s early days. It tells a Bonnie and Clyde-esque story of lovers who are on the run from their sins and ultimately die together. In the liner notes for the record, Way dedicates “Demolition Lovers” to a person we presume was his then-partner, writing, “To K: I’m sorry I wrote all these songs about killing you. I hope the last song makes up for it.” What a sweetheart.

What’s your favorite song from the album? Let us know in the comments below!