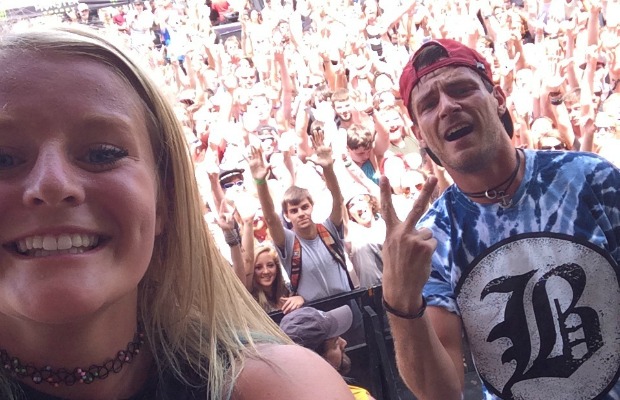 As of late, I’ve been hearing a lot of talk about the “stage selfie.” Many people ask my opinion on it, because I’m an advocate of having boatloads of fans over barricades taking pictures with me at live shows. I felt maybe I could take a few minutes to offer my take on the heavily trending topic and whether or not it’s good or bad. First off, my answer is as incorrect as it is correct, because this is entirely determined by the band onstage, not me. Most every point and argument is completely valid. As far as my opinion on Jordan Buckley goes (which I keep getting asked for some reason), he has to be one of the best guys I’ve ever met in my life, and if kicking a phone out of someone’s hand at an Every Time I Die show is the worst you could speak of him, he’s doing some good damn work! As an ETID fan, I would personally love for Jordan to kick my phone. I’d have an awesome story that lasts years longer than any phone. As a matter of fact, if it were offered in one of those VIP package deals, I would purchase one to have my phone personalized by Jordan Buckley.

I guess I never really thought about whether or not it was okay with me. Yes, of course it interferes with my live show having kids on stage or having me jump down onto a speaker to take a photo with someone. And yes, it interferes with the band sounding their best, too. But for me, sounding my best will usually take a back seat to the energy and experience of a live set. I never went to see American Nightmare to hear them “sound their best.” It was about the energy and what I took away from that 45 minutes that changed my life. I guess it actually can be dangerous to a degree as well, being that kids climbing on stage could get hurt with a flying instrument or giant red beard. I just never really thought about that stuff. This summer, I coined a term “selfiesurf,” which is taking a selfie with the band while crowd surfing. I noticed a ton of you doing this all over the country on Warped during our sets. It ruled! We could always just stick to grabbing one of those pics and staying off the stage, eh? We all know that you aren’t going to put your phone away for more than five minutes anyways, just make sure you’re not giving it more attention than the band you’re there to see.

I personally made a decision on our third record to put as much as I could of myself into making a positive experience for people at my shows. This means being at our merch table constantly to connect with fans, putting the microphone to someone else’s mouth as much as mine, spending my free time connecting on social networks, listening, learning, and most importantly smiling. Seeing those kids’ faces when they walk up to me to tell me their struggles or to embrace an artist they admire is truly the greatest gift and privilege I have ever received in my life. That’s something that I personally need to keep focus on while on the road. I remember that same excitement, and at that age I never had anyone in my life to connect to like that, so it’s the No. 1 priority to me.

Look, if it really makes you guys happy, come up and play a damn game of Candyland on top of my head during my set, I don’t care. Just please be careful to not get hurt if you do. This does not mean you should do this at every single show you go to, however. Every opinion you’ve heard on this subject is specific to the person performing.

The photo attached is a fan named Taylor Flynn. I actually made security bring her on stage so she could take this photo after I noticed her crowd surf half a dozen times at more than five dates of Warped Tour this summer while watching us. I also did this at every single one of my signings this summer, which seemed to make so many kids happy and feel a part of Warped Tour and the Color Morale on a more personal level. Seeing all the comments on my personal Instagram about how excited kids got made me start doing it after every set at our merch table, as well. In closing, just look at their eyes. What I see is the best day of their lives in that moment and an authentic happiness that makes my personal needs and wants obsolete. As far as my standpoint on the subject, I don’t care what you do, just have fun and be safe in the process!