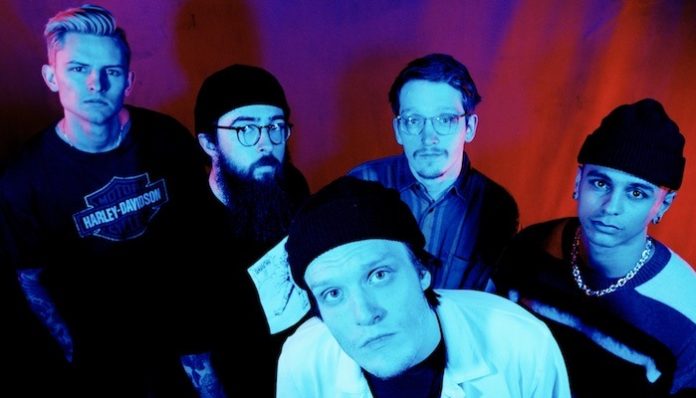 We’re just days removed from Neck Deep announcing All Distortions Are Intentional as the follow-up to 2017’s The Peace And The Panic. The pop-punk act dropped off the first Technicolor single “Lowlife,” and now they’re giving fans even more to look forward to by teaming up with AltPress to exclusively announce their 2020 headlining tour.

Set for this fall, the band are still busy prepping an epic stage production for fans. While frontman Ben Barlow is keeping mum on how the grander theme of the app-teasing and “Lowlife” video setting Sonderland will tie in, he did tease they’ll be doing things on this tour that they’ve never done before.

Read more: My Chemical Romance are why you lost sleep over “A summoning…” nods

Ben also opened up on what went into creating their new album and their new bassist Seb Barlow, who has officially joined the band following Fil Thorpe-Evans’ 2018 departure. The frontman dives into the dream come true of playing alongside the latest addition who’s also his brother and Neck Deep’s longtime producer. Check out all Ben had to say about the new era below.

What was the most difficult part of the new album process?

I don’t think any of this record was particularly difficult, which was great. But I think the most difficult part of any record is really just those tough days where you struggle with a song. Usually, though, that’s only ever for a day or so, and the joy of ‘cracking’ a song overshadows the struggle by far.

How has the writing, recording and creativity of this album differed from your previous releases?

The recording process was totally different. We were much closer to home and very isolated. We recorded in the middle of nowhere in South Wales called Monnow Valley [Studio]. Not only did it allow us to cut ourselves off from any distractions, but because we lived in the studio as well, it meant we could fully immerse ourselves in creating music.

Read more: 10 nostalgic pop-punk songs you had on repeat in the 2010s

Anytime we start a new tour, the stage production is a big part of the show. It requires a lot of time and planning, which is what we’re doing right now. We’re definitely looking to do some things we’ve never done before and make sure the new album is met with new visuals across every element of the band.

These will be some of your first shows since publicly revealing Seb Barlow has joined the lineup. What does he bring to the band’s dynamic onstage?

We don’t know yet! Seb hasn’t actually played a show with us yet, but his first show isn’t too far away. He’s a great singer, so harmonies and backing vocals are a major part of that. He’s a pretty quiet guy, but from watching him play shows when we were teenagers, he’s definitely got a move or two.

Read more: Sleep On It react to new music from Neck Deep, All Time Low and more

You’ve previously worked with Seb as a producer, but what’s it like to work with him in a larger capacity as an official band member now?

It’s great. In a lot of ways, he’s always been in the band. Not only has he worked as a producer from us since day one, but he’s always had a hand in things behind the scenes with Neck Deep. He knows us all really well and has a slightly different perspective on things than we do, having been on the peripherals for a long time. It’s perfect having someone who knows the band so well but can also bring something new to the table.

Felt like I’ve always been a part of the band, but now I actually am. Incredibly excited to finally meet so many ND fans that I’ve watched from a distance online over the years and thank you personally. I’m also incredibly excited for what the band has in store, starting with an app (OK lol), which you can download right now from whatever App Store you use… little bit of news and other cool shit happening on there…

As siblings, how does that dynamic affect your working relationship?

Honestly, it doesn’t affect it at all. We’re brothers, but we’re best friends, too. We respect each other, but we aren’t afraid of each other, which I think is super healthy. It’ll be a dream come true for both of us to look across at each other, playing a show in front of a couple thousand people. We used to dream of a moment like that. We would put on whatever band we loved at the time and bounce around our garage with tennis rackets and baseball bats as guitars, imagining the thrill of being in a band. Fifteen [to] 20 years later, here we are.

You’ve begun teasing Sonderland as part of this new era with an official app. Will that theme play into the tour at all?

You’ll have to wait and see.

Read more: Can you guess the Neck Deep album from a single lyric?

What sparked the idea of doing an app, and how will you utilize it in general throughout this new album cycle?

We just wanted a way to communicate with our fans that wasn’t social media. News and info can get lost so easily that we wanted a place where all of that can be clear and concise. It just cuts out a lot of the crap with social media and gives our biggest fans some cool content, a place to communicate and some sweet extra benefits. It’s going really well at the moment, and it’s still super-early days. The more fans use it, and the more we use it, the better it will get.

The Matt Squire-produced All Distortions Are Intentional drops July 24 via Hopeless Records. Album presales are available here, and you can check out the first single “Lowlife” below.

Following their U.K. run in September, Neck Deep’s U.S. headlining tour kicks off Nov. 6 in Nashville and wraps up Dec. 12 with one of the biggest shows of their career at Terminal 5 in New York City.

Fans can register on Neck Deep’s website here to receive a priority presale access code, which begins March 10. General on-sale kicks off March 13 at 10 a.m. local time. Check out a full list of dates below. 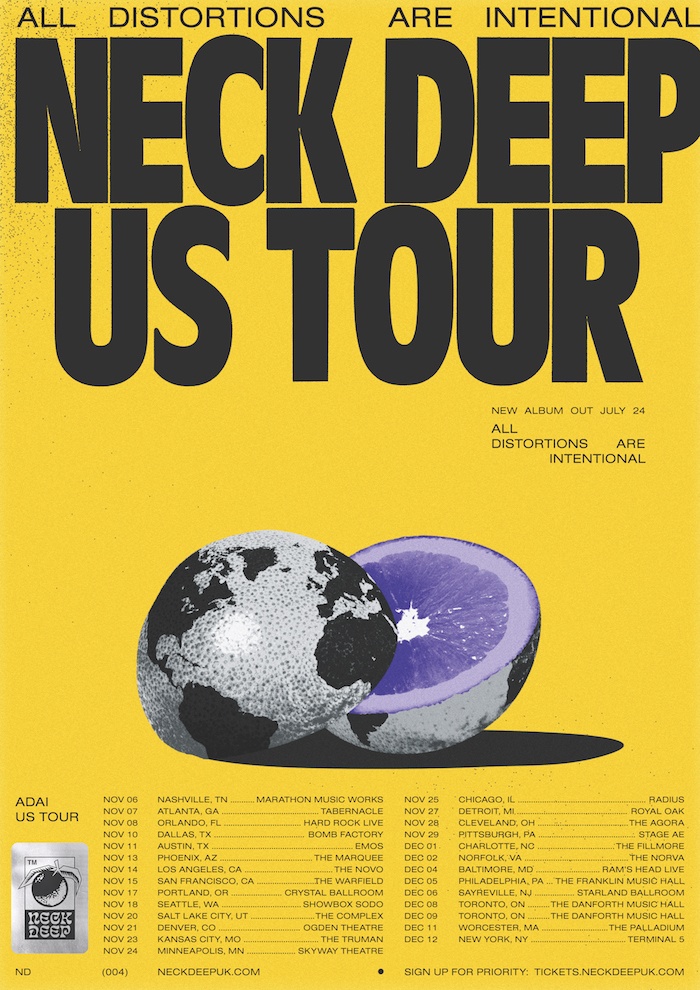