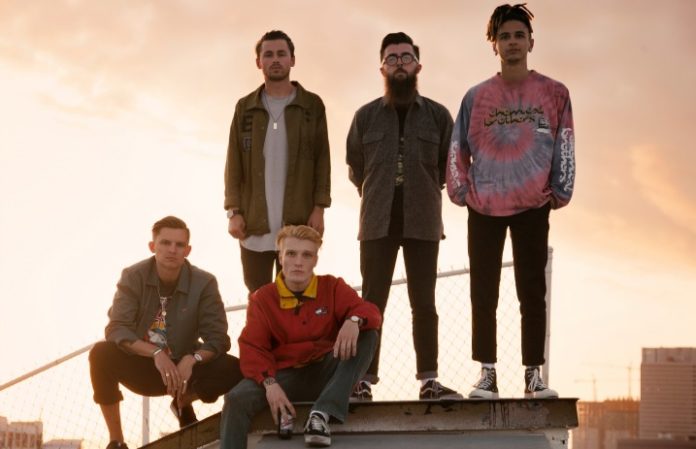 U.K. pop-punk trailblazers Neck Deep have announced their new album, The Peace And The Panic, which comes out Aug. 18 via Hopeless Records. The record follows the band’s 2015 LP, Life’s Not Out To Get You. Neck Deep have launched the new album with two singles: “Where Do We Go When We Go” and “Happy Judgement Day,” which you can check out below.

Read more: The history of Neck Deep you haven’t heard — until now

“Where Do We Go When We Go” music video:

We caught up with Neck Deep frontman Ben Barlow to talk about the new tracks, why the band decided to drop two singles and what we can expect from the new album, which you can preorder here.

You can check out the interview, album artwork and full tracklist below.

What’s the big story behind the band’s third album?
The Peace And The Panic is about how we’ve grown up and experienced life in the last couple of years. When we were writing Life’s Not Out To Get You, we were going through a period of uninterrupted happiness. We were super-content, but as that album came out, life changed for us. Over the two years we’ve toured that record, so much has happened that I’ve re-evaluated what life is about and questioned whether just having a positive outlook is enough.

Why do these songs get to lead the conversation on The Peace And The Panic?
“Where Do We Go When We Go” is the last track on the record, and we feel it summarizes our mood well. Very directly, the message is: “Fuck all this shit, fuck all the noise, let’s just make something of ourselves before our time is up.” “Happy Judgement Day” is on the panic side, and really, that song is a comment on the current social and political climate. That feels like an important topic, and it’s a panic for a lot of people right now—where’s the world going? It should also be said that the reason we put that song out first is because—in typical Neck Deep fashion—there’s a big, fat riff at the start of it.

Did you begin writing this album with these themes in mind?
I did have a lot of this stuff in my mind. I knew I wanted to talk about death in particular because I lost my dad last year, but a lot of it came together in the studio. We can write all the songs in the world, but when we’re in the studio, in the flow of writing, that’s when it all comes together for us. We had a lot of vague ideas and we always knew that going into the studio would be when it all tied together.

Did you think about not bringing your dad’s death into the record, as singing about that only invites questions about it?
It was a consideration, but I think it was only natural that I sung about him. My family is such a massive part of my life. I would have been trying to escape reality if I didn’t write about him. I’ve always been a guy who writes from the heart and talks about what I’m going through. I think people should talk about things that upset them or get them down, as talking about them is great therapy and writing songs about them is even better.

You worked with Neal Avron and Mike Green on this record. What was that like?
We’ve always been a band to try new things, and when Neal and Mike were brought into the conversation, it was exciting to look at their catalogue and think what they could bring to our sound. Mike really pushed us on structure. I think Neck Deep maybe has a tendency to ramble in our songwriting; he stripped that back and he really made us think about every part of our songs. Neal brought in a rock-heavy feel and mix, so they both gave us something new and fresh.=

How are you looking forward to the next bit of life as you start promoting this album?
I’m excited and happy and positive, but at the same time nervous and anxious and heartbroken. I’ve got every emotion at the minute. It’s always scary thinking about how people will perceive something you’ve worked so hard on, but I’m incredibly proud of what we’ve done and I hope to God that people like it.

What would be one of the biggest things you’ve learned about yourself during the making of this album?
I’m not a kid no more, and I’ve had a real dose of life hit me. I’ve come to a realization that life is up and down. It’s a mysterious thing. I’ve just grown up massively: I’ve experienced death; I’ve experienced life; I’ve experienced people. I had a full-on epiphany while we were making this album; I was having the most stressful couple of days trying to write this one song, but then I had this full on moment of clarity. It sounds lame, but the sun was shining through our apartment as it set over the LA hills, we had this fucking cheap TJ Maxx buddha in the corner of the room and I was staring over at it and I had this moment where it hit me. I was like, yeah, this is what all this is about. This feeling right now, this panic, this horrible dread, this anxiety, this stress—I’m meant to feel like this so I can experience the good with it. I can’t get one without the other. That was a big realization for me and that very much translates into this record.