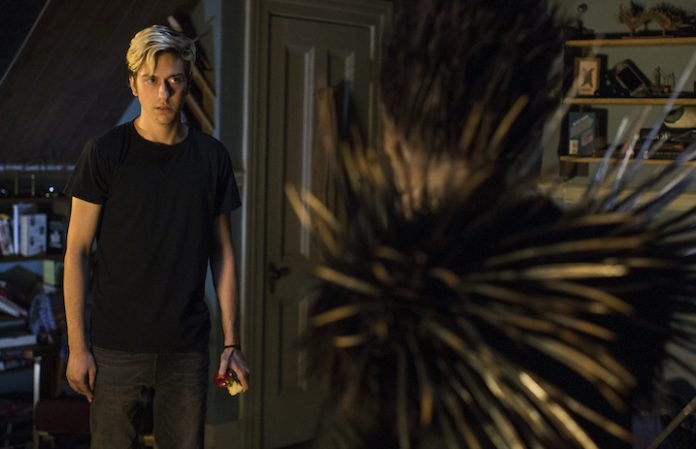 I think it’s safe to say Netflix goofed on this one. Their film adaptation of the beloved manga and anime Death Note translated onscreen like an early-2000s Disney Channel Original Movie crossed over with a straight-to-DVD Final Destination sequel. For anyone who has never seen or read the original source materials, this is just a cheesy B-movie; for anyone who has devoted themselves to the 37 animated episodes or read the 12 volumes of the manga, this is a bastardization of some of the most complex characters in pop culture.

*A note before you continue reading: The following contains spoilers.

Let’s address the elephant in the room first: Netflix completely white-washed this film. If Netflix could find an entire room of Asian actors to play dead for one scene set in Tokyo, would it really have been that hard to cast an Asian actor to play Light instead of a Mark McGrath wannabe? Changing the setting from Japan to Seattle adds to this weird idea that Netflix wanted to Americanize a Japanese cultural phenomenon, which may account for why the plot of the film feels like every other teen movie of the last 20 years. Riddled with overdone teen angst, we get yet another unneeded story of a bullied high school nerd who has something empowering happen to him, leading him to get the girl and a new reputation. This cringe-fest was then coupled with a low-budget CGI demon and unrealistic gore.

The characters of the original Death Note drive the story far more than the plot, the same way Walter White and Jesse Pinkman’s characters did in Breaking Bad. The entire storyline focuses on a high-stakes game of cat and mouse between the pseudo-villain, Light, and his foil, L. The anime Light is an egotistical sociopath who who at first believes he is using the Death Note for the greater good. These seemingly justifiable intentions eventually form the power trip that makes him believe he is a god, just like the Shinigami (god of death) Ryuk that accompanies him while he possesses the Death Note. However, the Light in the movie, who happens to have the last name Turner (and a seemingly fairly odd death-godparent), is a standard unhappy teen who will literally do anything to get the girl—like show off the fact that he murdered the school bully and even momentarily contemplate murdering his father for her approval.

In the anime, Light is a loner; he does not need friends, and even when he has a gorgeous celebrity “girlfriend” at his fingertips, she becomes a puppet in his grand scheme. The Mia of the film, based on the Misa of the manga, controls Light in the way that he controls her in the original storyline. Maybe this is some sort of female empowerment move, but it’s so degrading to the original character arc that there is no empathy towards Mia’s lame, unrealistic death by Ferris wheel. She is annoying and manipulative, and therefore her character lacks a level of tragedy found in the abused Misa of the manga.

The film focuses mainly on the relationship between Light and Mia, whereas most of the anime and manga highlight the battle of wits between Light and L. Light uses his intellect and overall power of the book, while L couples his brilliant deduction skills with a keen level of rationality and foresight. What makes L so appealing, though, is that he is a hero who ultimately loses. He fails to stop Light and dies in the process. In the movie version, L starts off as a lesser version of the aloof, incognito genius and soon loses his sensibility due to Light's not-so-crafty mind games. In the manga, this wouldn’t happen—no matter what happens, L remains predominantly calm and collected, even when he realizes he is going to die.

Netflix’s film feeds on classic character tropes, such as the good guy always winning, hence ending on a cliffhanger alluding to L’s victory. Simultaneously, Netflix wants us to like a mass murderer solely because he is the leading role, leaving the potential for Light’s escape open. The film even tries to paint Ryuk as a bad guy because it needs a concrete villain, even though Ryuk is perhaps the most likable character in the anime. All he wants to do is chill, eat apples and watch what would happen if a Death Note fell into the hands of a human. Why? Because he’s bored from hanging around in Shinigami land. There’s no real malicious intent, unlike Willem Dafoe’s demon. Ryuk is simply tired of his humdrum eternity.

Death Note as an Americanized movie fails because it tries too hard to fit the standards of blockbuster films rather than live up to the complexity of the original manga. Whereas the original forms a cohesive depiction of a god complex, the adaptation presents a strange and questionable high school love story and greatly alters the intended plot to drive action that viewers do not need to see regurgitated again and again.

What did you think of Death Note? Sound off in the comments.