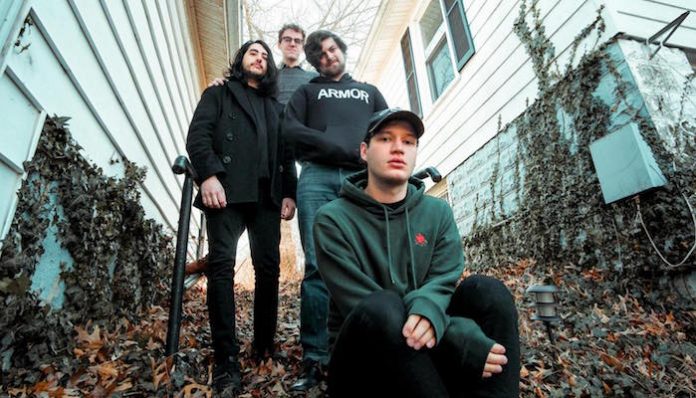 Pop-punk act Never Loved and producer Matt Squire were in the middle of completing the band’s debut album when coronavirus began to spread around the world. It was only a matter of time before festivals and tours announced cancellations. With studios closed and artists left to create in their homes, collaborations between writers, producers and bands have become more difficult but not impossible.

Read more: 10 scene song lyrics that probably wouldn’t have been sung in 2020

The multi-platinum producer who’s worked with artists such as Ariana Grande, Demi Lovato, Underoath and Panic! At The Disco actually first thought about remote collaboration a few years ago. Because it wasn’t in high demand at the time, his idea didn’t find its way off the ground until recently when he and Never Loved were finishing the band’s debut album, which follows their self-titled EP from last March and latest single “Down.” Though not easy in the beginning, Squire and vocalist Camm Knopp say the process was creative and enjoyable nonetheless.

The coronavirus pandemic made things extremely complicated in the music industry very quickly. How’s everything on your end? Has there been a drastic change just by having a different recording process?

MATT SQUIRE: This is a huge, unprecedented event for everybody. Our basic feeling was the show must go on. We were almost done with this record—do we delay and try to finish in person? Do we try and give a bunch of email notes back and forth and try to get it done remotely and with the traditional method, or is there a better way? That’s what we looked for. Is there a way that we can actually work on the same sessions in two different locations? We found an app that’s a collaboration app from Logic Pro. To finish up the last piece of the record, we set up an online session and collaborated that way. It actually was quite liberating, and I think it’s good for people to know that you can still be really creative during this time if not more so as long as you think outside the box and remember that we have a job to do. We’re here to make music for people. They need it more than ever.

Read more: Never Loved are over unrequited relationships in “Down”—watch

CAMM KNOPP: Absolutely. This is my first go-round with an online collaboration, so it’s completely new waters for me. I remember it was 2 a.m., and I’m editing a track and doing something as I texted Squire. He was like, “Yeah, I’m already queuing it.” I was like, “What? That’s so cool.” It really helped make this easier instead of giving him a call and saying, “Hey, I’ll do this,” [go] back and forth through email, download a giant file and go, “Oh, did you get this?” Sometimes we have to share files like that, and there are missing elements, but this app made it really easy. It’s like we’re in the same room on the computer.

Candles are the sound of hits

You mentioned that you were toward the end of the recording process. Were you finished writing the record, or was that something you were still working on?

SQUIRE: I think the record is done, but what we were missing was a flow with segues in between some of [the songs] [to] really make it an album. That’s the part we hadn’t gotten to yet. It’s hard to actually create that kind of flow when you’re not in the same room, and we were nervous about it. Through the ability to collaborate online on this platform, it ended up being this thing where Camm could finish writing the segues, lay them in between the tracks and I could get those pieces instantly and put them together. It’s definitely what we envisioned plus more. Part of me thinks it’s because we are working on our separate machines on the same project.

KNOPP: I think there’s pros and cons. Obviously, the con would be you’re not in the same room, so it’s not as simple as, “Let’s plug and record at the same time and quickly address this.” I think the pro with the online collaboration would be that you are able to work on your own clock. Maybe you’re not feeling it at 1 p.m. so you revisited at 11 p.m. You might have a chance to mess around and experiment with an idea before presenting it.

So there’s definitely things that have been made easier because you’re not there together.

SQUIRE: For sure, especially during a time when I think we’re all waking up to the realization that we don’t really have a choice. People aren’t going to be going to the studio in person for a little while. It’s a bummer if we have to look back and say it hindered the creativity, that the records could’ve been better. We were really thankful to find a creative workflow that enabled us to feel like nothing got in the way. We actually found something that was really cool and fun and made it all work.

KNOPP: It almost adds another aspect to the record in a really unique way. I don’t know many records that have both in-person and online collabs.

Matt, you’ve produced albums with artists such as Underoath, Panic! At The Disco and Sum 41. Have you ever faced this type of challenge with a collaboration before?

SQUIRE: I was really obsessed with online collaboration about five years ago. I put together a portal and this whole system that we’re using now. At that time, I got my friends excited about it, and they’re really into it, but there was no need. Nobody really adopted it because it was like, “This is cool, but we’re still set [in] our ways.”As soon as it became clear to me a week or so ago [that] the coronavirus is going to get in the way of in-person sessions, I was like, “I should light up the outline platform again,” and we just finished up stuff that way. I’m busier than I’ve ever been. I’m currently writing with half of my artists.

Obviously, this pandemic is a terrible situation, but in [a] positive light, we’re discovering that these online collaborations could be really cool. There’s a lot of things that could still be worked out with it, but it could lead to something really cool in the future if you want to write with people super far away.

Can you break it down? What’s a typical day in the studio versus right now?

SQUIRE: Usually we start around 1, then we’ll take a little break for dinner and we’ll go on till about 11. Let’s say we’re doing guitars and vocals. We’ll do two to three hours on each song on guitar during that day session, [and] then we’ll cut vocals at night. I am usually on my computer in the morning editing. It’s a very normal studio environment, except when Never Loved are there because when Never Loved are there, you have to eat jalapenos all day long. If you don’t, then you have to take shots.

For the online thing, it’s been much more freeform. I’ll be working on a beat and just click my Google Hangout, ask somebody a question and they’ll chime in. We check in everyone once in a while, and there hasn’t been any real structure. If I’m tracking vocals, those are structured because they have to sing. The way it works is I’ll fire up the video chat so I can coach takes. I’m very lucky because the bands I work with all have their own rigs and their own microphones. It’s interesting because if we had set up to do vocals in person, it would have been a five-hour session. [With an] online session, actually doing the vocals [takes] about 45 minutes.

Read more: 10 musicians streaming games and rocking out on Twitch

It sounds like based on your experience with this type of collaboration so far, you would recommend it to other artists and producers. What are some of the hurdles they would have to overcome?

KNOPP: I think there’s some tech things involved, or if you’re not super computer savvy, there’s missing file bounces and little things like that. I think this software and this app have so much capability and potential—it just hadn’t been exercised as much because of lack of demand. Now that it’s needed, I think a lot of those things will get fixed and worked out. Luckily for me, I demo at home. Usually when I bring my stuff, it’s in the ballpark of how I want the production [to] sound in terms of programming. The only really big hurdles are the glitches and files going missing in getting uploaded.

SQUIRE: As long as you have GarageBand, we can actually do this. That’s a really easy program. Even if you’re not good at home recording, we can still create a special together, and I can still get what I need in order to make it sound awesome. I’ve been doing screen share with people so I can see exactly what they’re doing and go, “No, no, put it over there.” I can usually get people through it. Once you get that learning curve down, it becomes collaborative again, and it’s easy to get through.

Read more: 15 scene records that should have easily won a Grammy

These coming weeks will be difficult for not only artists but workers around the world. Do you have any words of advice or encouragement?

SQUIRE: Just find a way to keep going and keep doing what you’re doing, what you love to do. For me, it was immediately [like], “OK, how am I going to keep going? How am I going to keep rocking?” My advice is: the best you can. This has uprooted all of our lives. How can you maintain the balance of who you are and stay true to that and find the fun even though shit is really fucked up?

KNOPP: Try to find the positives in the situation. Freaking out about it [doesn’t] help the situation as a whole. Everyone is in this together. If you’re feeling some type of way about it, you can text your friend because they’re probably feeling the same way. Just try to make the best of the situation: learn a new hobby [or] take the downtime to relax and reflect on life.