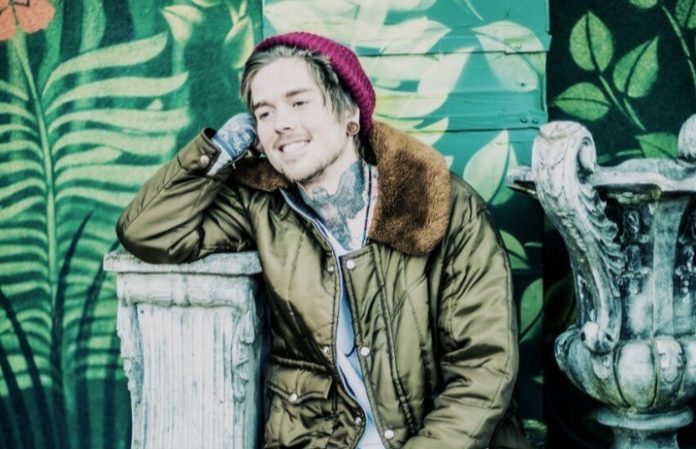 When Christofer Drew gets on the phone with AP, he’s in his truck, running errands, “you know, hitting the grocery store, the bank…being a human, doing human things.” It’s a new chapter for the mastermind of Never Shout Never, who’s in the process of moving to a sprawling ranch in Colorado he describes as “off the grid. I lived on a ranch when I was a kid for a while and I wanted [to do that] again, get a big dog, lots of animals. I’ve been in a relationship with a beautiful lady; that’s chilled me out quite a bit.”

It should be no surprise then that Drew’s next chapter, All For Love, is a covers album of love songs the singer is recording with keyboardist Tof Hoglen at the House Of Blues recording studio in Nashville. Last week, Drew released a version of Elvis Presley’s 1956 hit, “Love Me Tender” on the band’s YouTube channel. Today, AP is premiering his take on “Something,” the song written by George Harrison that appeared on the Beatles’ Abbey Road album. The video features Drew and Hoglen working on the song in the HOB studio, as well as Drew walking around a graveyard near the studio. “It’s very relaxing,” says Drew of his interpretation of the song. “We went for a soothing lullaby vibe on that one. I purposely posted ‘Love Me Tender’ at midnight because I wanted everybody to be feeling kind of sleepy at that time. I got a couple tweets of people whose kids were sleeping, like they were knocked out by the song,” he says, laughing. “It’s truly one of the best love songs.

“It’s a relief doing covers,” he continues. “It takes the pressure off of me. It’s been really nice because I can just focus on being a singer. It’s a whole other approach, something I’m not really used to.”

Drew says that he hasn’t completed All For Love yet, saying he and Hoglen are purposely taking time to make sure it’s right, with the aim of having the complete record released by the end of this summer. “I really like the idea of the slow and steady release and that way we build it up for a couple months. I think more people get excited about it that way.” Other songs set for inclusion on the album include a ukulele version of Frank Sinatra’s “Fly Me To The Moon,” the Bee Gees’ “How Deep Is Your Love,” reggae icon Bob Marley’s “One Love,” Michael Jackson’s “Heal The World” and John Lennon’s “Woman.” “It’s going to be mostly romantic love songs, but then there will be songs about universal love,” Drew explains. “That’s what I’ve learned through this life: Love and unity is what’s going to help our planet and help us keep growing as a species.”

Drew also sees the covers album as a way to re-engage with fans since the 2015 release of Black Cat. Still signed to Warner Bros, Drew has been writing and demoing new material for his next record for the label, Emerald Sun. “We haven’t started the actual production on it,” he says, mentioning it’s been a work in progress for two-and-a-half years. “We’re going to release that gradually as singles, as well. It’s going to be a 13-song album, a big chunk of music. The last record, Black Cat, was an amazing experience for me: It was a month-long experience, kind of like boot camp for me. [Laughs.] I’m really confident in these songs. I’m real low-stress right now. I’m doing what I want artistically and it feels great.”

Drew seems all groovy and laid-back, but the amount of projects he’s got going on feels like a state of perpetual motion: In addition to readying two albums and booking a late-summer/fall tour dubbed Songs Of Love & Hope Acoustick Tour (“It is going to be a very intimate evening with songs to inspire the change we need in the world!”), he’s also publishing The Dove And The Dragon, a seven-volume series of poetry books, as well as starting a tea company (“I’m all about natural healing, and I’ve been using herbs for my own benefit and healing”). That seems like a lot of work on anybody’s schedule, yet he’s describing his life as “keeping it real chill.” He starts to laugh. “I’m just a hippie, you know?”