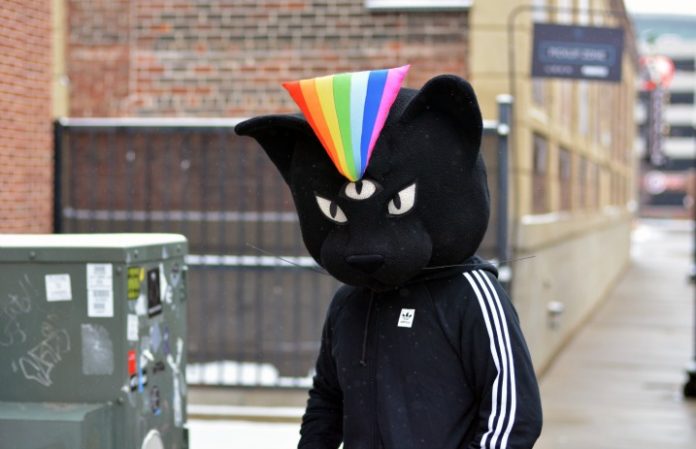 For Cat Guy, touring with Never Shout Never is a dream come true. The oversized feline has appeared in a series of videos on the band’s YouTube channel that feature him packing for tour, meeting the band and even hanging out with Santa.

“You only get 9 lives—ya know? I'm just glad to be spending one of them on the road with some of my best friends,” he says of the opportunity.

The videos, which are filmed and edited by Kyle Rodgers, give a deeper look into Cat Guy’s journey with the band as they embark on a headlining tour in support of their recently released Black Cat album.

In the latest exposé—which is exclusive to AltPress—Cat Guy has a chance to take the stage with NSN, which he describes as a move that’s “what’s best for the show.”

“Playing an actual bass and really getting up there and just sinking my paws into the fret board, that’s what it’s all about,” Cat Guy shares in the video. “That’s living.”

You’ll also get a glimpse of him visiting the Sour Patch Kids House in Austin, Texas, where he records his first rap. We’re not sure when the tune will drop, but Cat Guy describes it as “straight gold.”

“He's like that cousin that never left town,” NSN’s Taylor Macfee says of the feline tag-along. “You only see him at family reunions, and—Lord bless him—he is so genuine, but can be a bit much. You can't seem to run away from his good company.”

Check out the full exclusive interview below, and for details about Never Shout Never's album and touring visit their website.