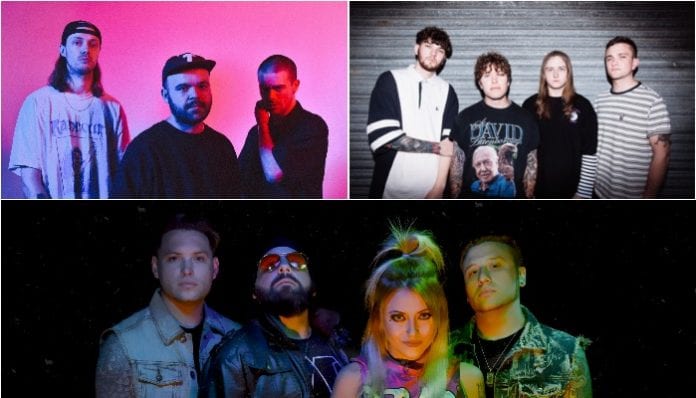 This song from NYC-based alt-pop band Missyou creates tension with its descriptive lyrics and haunting instrumentals. The various layered instrumentals give “YourBody” depth and intrigue. Pulling from influences such as Black Veil Brides, “YourBody” sets a definitive tone for this band as they prep for their debut EP of the same name, out Sept. 7.

This Brit-pop band just want to have fun in their music video for “Headbutt.” Featuring a colorful background and an active performance, the energy in the music video is contagious. You’ll find yourself head-bopping to the beat as you listen to this upbeat and vibrant song, off Youth Killed It’s album What’s So Great, Britain?

Modern Color provide a perfect mix of laid-back chill music and guitar-driven rock for whatever headspace you’re in. Whether you want to dance in your chair or just sway to the music, “Head Change” carries you with its easy flow, providing a soundtrack for whatever vibe you’re feeling. The track is from the band’s upcoming record, Portuguese Bend, which will drop Sept. 28 via Indecision Records, Programme Sounds, and Other People Records.

Don’t let their name fool you—Puppy’s new song “Black Hole” does not necessarily give you the warm fuzzies. This supercharged song acts like Puppy’s anthem as they embark on the journey to create their first album, making it the perfect song for a confidence booster with its hidden pop undertone and supernatural-influenced music video.

Right before their new album Identity Crisis, Liverpool-based band WSTR released “Silly Me.” The song features an acoustic intro before diving into power chords. WSTR often incorporate unfamiliar genres into their music, and “Silly Me” is the perfect preview for Identity Crisis, out now.

With raspy vocals courtesy of frontwoman Christina Chriss and heavy drums, “My Enemy” is the uplifting pick-me-up we all need. Kaleido go hard on this confident rock track, giving us the perfect musical equivalent of a middle finger to throw at anyone who tries to wreck our weekends.

Super American — “Givin It Up”


An acoustic guitar is the driving force of this alt-pop song from Super American. The band manage to infuse elements of country, pop and punk to create a brand-new sound in “Givin It Up.” The bright, bubbly song might be just the thing you need to shake up your weekend.

Walking Dead On Broadway — “Gospel Of The Kingdom”

The accompanying music video for “Gospel Of A Kingdom” features the story of a tribe starting a rebellion, a storyline that seems as if it will continue into the next music video if the ending is any indication. A definite headbanger, this new song from Germany band Walking Dead On Broadway is everything a metalhead could ask for.

A Better Hand — “Clear Your Conscience”

This new song from A Better Hand is a classic pop-punk track. The music video showcases the lead singer Jordan Salgado and a woman in couples’ counseling, leading into an inevitable breakup. The song acts as a soundtrack for the totally relatable scene and should be considered a must listen for any pop-punk fan.

Featuring Lontalius, RYAN Playground uses this slow jam to look back to her pop-punk childhood while creating a new genre. The reflective, almost melancholy song combines electronic elements and everyday sounds to create something new.