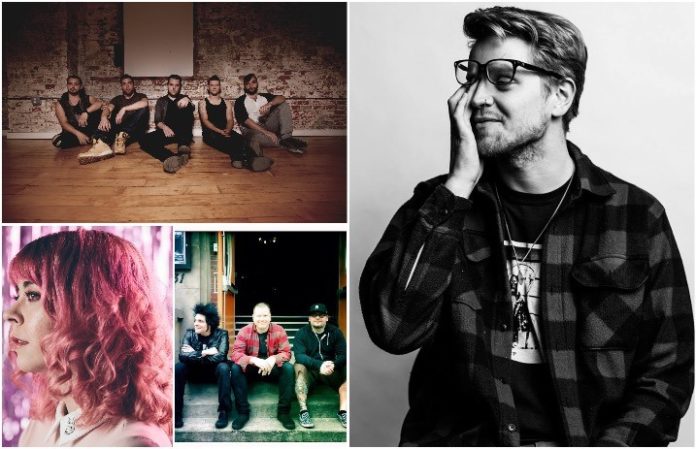 Detroit has produced some serious musical talent (the White Stripes, MC5, Stevie Wonder, Negative Approach, the Stooges, Eminem, the Temptations). From indie to hip-hop to metal and punk, the birthplace of Motown continues to breed brilliant artists. Here are 10 up-and-coming artists from Detroit Rock City you need to know.

Rooted in punk and raw rock, Undesirable People bring a very eclectic sound to the table. The quartet  have fashioned their own unique sound by blending influences from such indie/emo forebears as Built To Spill, Basement and Saves The Day. Having dominated the Detroit music scene for the better part of their existence, this group are planning on making their mark in 2018 with a fresh release. This new record will solidify who the band are as musicians and as a group as they comfortably come into their own.
CHECK OUT: “Choose”

If the True Blue were encapsulated into one human, they would be Ryan Gosling. This collective create a sound that is sonically smooth, sexy and confident with their wild mix of R&B and indie influences. If you want to cry, smile, vibe or all of the above, this group have you covered. Not particularly interested in following tried-and-true methods in regards to releasing music, the True Blue will drop surprise singles randomly. Not surprisingly, their standing in the Detroit area has grown significantly.
CHECK OUT: “No Answer”

If Coheed And Cambria and At The Drive-In had a love child, Narco Debut would be the polished spawn. This four-piece allows their visuals and music to do the talking for them with cinematic eye candy, impressively tasteful guitar work and complex rhythmic patterns. Keep your eyes peeled wide for this group this year.
CHECK OUT: “Garden Dreams”

Dream-pop goddess Ladysse is one of very few artists in Detroit keeping pop alive in the up-swinging city and doing it with class. A fairly fresh California transplant, Ladysse has been performing in the Detroit circuit for less than a year, but has been getting the attention she deserves. With the newly released single “Eleven” under her belt, Ladysse is planning an EP for later this summer.
CHECK OUT: “Stay Apart”

This three-piece punk powerhouse are made up of members from Mest, HiFi Handgrenades and the Suicide Machines. Yes, you read that right. If you are looking for catchy, driving, infectious punk music, look no further. This group knows how to write songs and how to perform the hell out of them.
CHECK OUT: “Injection”

If you are involved in Detroit music in any genre, you have heard the name Shapes & Colors. This group can do it all and do it well, from live performances, inspired songwriting or solid musicianship. A new release from these Metro Detroit rockers is in motion for later this year.
CHECK OUT: “Drifting”

Shoegaze fans rejoice: Your new favorite band have arrived. This trio released their full-length record, Dixieland, last year and have piqued the interest of fans in both Detroit and around the country. With a full U.S. tour starting this month with their friends in Mover Shaker, Greet Death are buzzing heavily throughout the music community.
CHECK OUT: “Black Hole Jesus Christ”

For fans of post-hardcore, Adventurer bring that Closure In Moscow, Fall Of Troy and Sianvar vibe to the surface with their latest release, Sacred Grove. Adventurer are signed to Will Swan’s (Dance Gavin Dance, Sianvar) label, Blue Swan Records. If you like what you hear, catch Adventurer on a quick southern, spring run this March with Makari.
CHECK OUT: “Oil Ocean”

Former Fireworks drummer and current Tigers Jaw drummer Teddy Roberts reveals a different side of himself with his self-titled, indie folk-rock project. Known live as Teddy Roberts And The Mouths, the group have been playing shows around the Detroit area and bringing a good deal of attention to themselves.
CHECK OUT: “Bells And Creeks”

American Arson consists of two members, but have the presence of an army. Vocalist/guitarist Evan Baker and drummer Jesse Gentry consistently continue to push the limits of a two-piece with the dynamic songwriting they offer up.
CHECK OUT: “Revival In My Lungs”