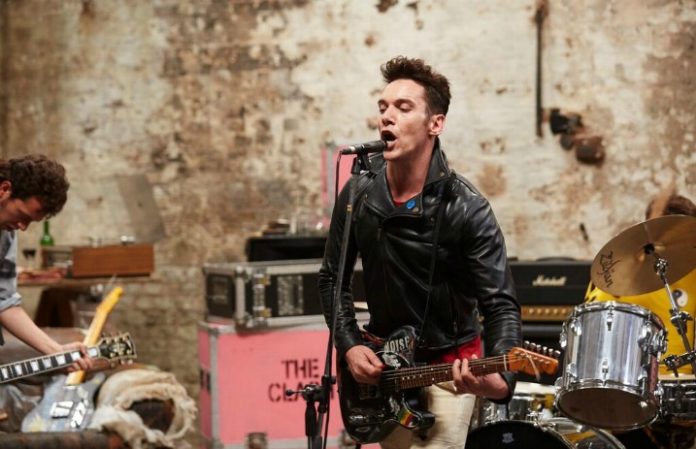 With a star cast and a killer soundtrack, the new film London Town has the potential to be one of the next great coming-of-age tales. Spearheaded by director Derrick Borte, the film follows 14-year-old Shay (Daniel Huttlestone) as he navigates through the struggles of love, a rocky home life and an unexpected friendship.

After his father is injured, Shay is forced to step up and provide for his family. He takes over driving his father's taxi, which leads to a life-changing run in with Joe Strummer (Jonathan Rhys Meyers), lead singer of the Clash. Set against the backdrop of the burgeoning punk music scene of 1979 London, London Town is a must-see for punk fans. Check out this exclusive clip and read what Borte has to say on it below.

“This is the scene where Shay is dressed in his mother’s clothes in hopes of looking older, and therefore legal to drive. He’s parked outside the squat, hoping to catch a glimpse of his mother when Joe Strummer (Jonathan Rhys Meyers) climbs into the back of Shay’s taxi as the police come up. We shot this scene on the longest day of the year, and the UK child labor laws are very strict as to the hours kids can work, so we only had an hour of darkness before Daniel had to be wrapped for the night. Shooting the action at the beginning of the scene, the chase and the dialogue at the end of the scene, in such a short period of time, required extensive prep and an amazing job by the art department, camera crew, stunt men, and of course these two gifted actors.”

London Town stars Daniel Huttlestone, Dougray Scott, Natascha McElhone and Jonathan Rhys Meyers. It's due to be released October 7 in theaters, on iTunes and VOD. Its initial openings will be held at IFC Center in New York City and Laemmle Monica Film Center in Los Angeles.

You can check out more information on London Town here.