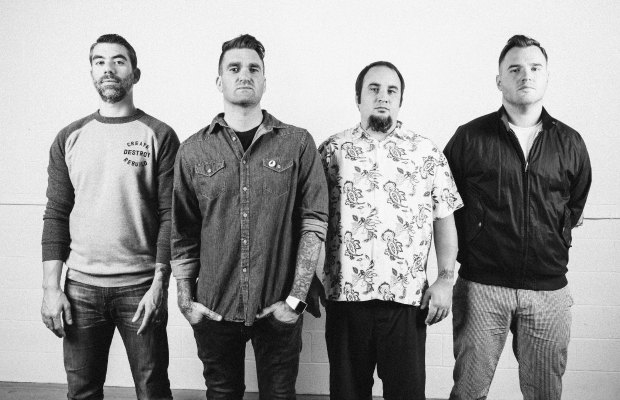 New Found Glory are set to release their eighth full-length album, Resurrection, on October 7 via Hopeless Records. (Pre-orders are on sale now.) After releasing two new songs—“Selfless” and “Ready And Waiting”—the band are teaming with AP to bring you a third, “Stories Of A Different Kind.”

Chad Gilbert says, “'Stories' is a song that tells a band lesson. Success, the way most people see it, money, fame, being in the public eye comes and goes with time and we all end up in the same place. Still in the real world with a bunch of memories. So spend more time enjoying the fun part of your career and make good memories instead of trying to stay on top.”

Stream the new song, and read extra Q&A with the band from AP 316 below.

What's the inspiration behind “Stories Of A Different Kind”?
CHAD GILBERT: It’s directed more toward younger bands I meet, and all they talk about is business and numbers, and how many kids showed up to the show, and never once do they mention, “Me and my friend took this stick of dynamite and blew up a Porta-Potty!” which is what we would do back then. No matter how popular we ever were, the focus was always to be sincere and write music from the heart, and be grateful for the career you were given. This whole scene has been building for a long time. If you’re only in it for drawing kids and making money, and if you’re not in it because it’s your passion, then you’re ruining your life. You’re in it forever. Take the last line, “You’ll be empty files in a trashcan/But I’ll be a good find in a used bin.”

Some people would take that as a negative, though.
GILBERT: No way! You’re a record, not a download. You won’t find the bands that are very popular right now in the used bin because they don’t have CDs! Hold on to what you’re doing, because when it’s gone, you won’t even have an artifact. Enjoy what you’re doing, make the memories.

What was the driving force behind “Stories Of A Different Kind”?
JORDAN PUNDIK: We’ve been doing this since ’97. Seeing bands come and go, and attitudes change, and people from all sorts of areas of life… It’s just kind of one of those things we’re always talking about and thinking about. The main drive behind that song was that this is something that is a real thing in our world, and we want to let you guys know, who are listening to the record, that we are not that band. It even still goes along with the whole theme of the record.