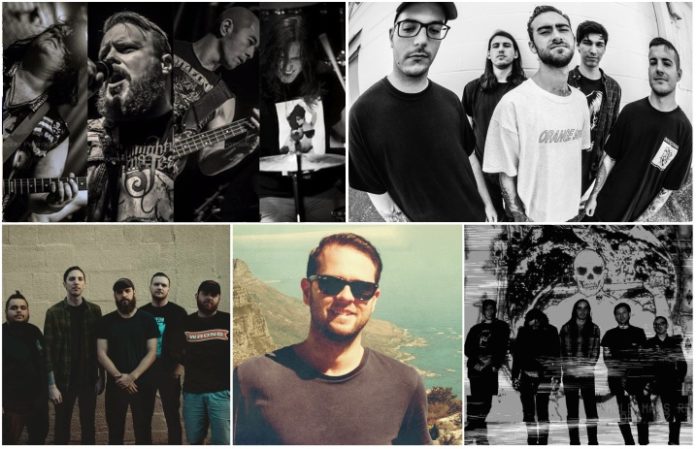 Needin’ some heavy jams for your playlist as fall approaches? Whether you’re working out, stressing out or just plain punching your fist into a wall as beach season dies and the cold air emerges, here are some killer, up-and-coming acts in metal, hardcore and beyond.

Read more: Yes, aggressive music can actually be good for you

Til Death came up as a Cleveland tech-metal band under the name the Approach And The Execution, sharing stages with the likes of Suicide Silence and Norma Jean; but they soon broke out of any esoteric musical restraints to make some hard-hitting, but accessible, melodic alt-metal. “Photographs,” above, was inspired by the death of vocalist Michael Notte's grandfather. (“Photographs fade unless you strive to live a life worth remembering.”)
Headquarters: Fullerton, California
Check out: “Photographs”

Riot Stares are the latest in a recent string of South Carolina hardcore bands who pack one hell of a riotous punch. Including band members from Palmetto State scene stalwarts Discourse (who sadly are no more) and WVRM, the group are the epitome of classic SC HXC cool.
Headquarters: Charleston, South Carolina
Check out: “Let The Phase Speak”

Nothing Left are the hardcore continuation of For Today’s positive metalcore style, featuring former members Brandon and Ryan Leitru. The new band released their debut EP, Destroy And Rebuild, earlier this year on Facedown Records, and it’ll definitely make you wanna shout along. (Also, Taylor Swift may have unwittingly swiped their artwork design.)
Headquarters: United States
Check out: “Hands Of Death”

On the more atmospheric tip, one-man death metal band Sacred Son are lighting up the internet this week with their perfectly pastiche album cover for their debut, self-titled release. Don’t be put off by the group’s savvy tactic of turning a mirror on metal society, though, as the heavy, enigmatic music contained therein is more than worthy of the blogosphere hype.
Headquarters: London, England
Check out: “Cleave The Alicorn”

Pittsburgh up-and-comers Concealed Blade are making real-deal hardcore that can only come from the streets, and the crew just released a self-titled 12 inch on Beach Impediment Records after a run of demo discs. Though not quite as melodic, these guys sure make us miss damaged Philly punks Leather. (Nearly any dirty hardcore band makes us miss Leather.)
Headquarters: Pittsburgh, Pennsylvania
Check out: “Bend The Steel”
Listen on: Bandcamp