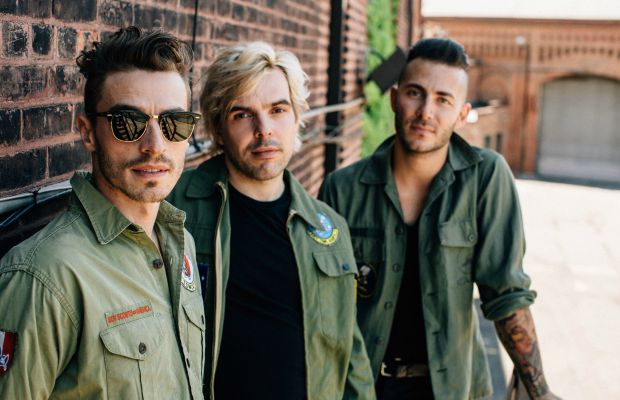 As songwriters, David Boyd and Søren Hansen are developing a hitmaking partnership. The Danish-born, American based duo – two-thirds of the band New Politics, along with New York drummer Louis Vecchio – crafted two big singles from 2013’s A Bad Girl In Harlem. And they followed up “Harlem” and “Tonight You’re Perfect” with “Everywhere I Go (Kings and Queens) and “West End Kids,” a new pair of hits from their imminent third long-player, Vikings.

Just don’t expect to see the pair do an acoustic set anytime soon.

“I can write a song with two chords. But can I play it? Fuck no,” confesses Boyd with a laugh. “I don’t even wanna hold an instrument!”

Boyd quickly concedes that Vecchio, who joined New Politics in 2010 when original drummer Poul Amaliel returned to Denmark, is the most proficient player in the group.

“He’s such an amazing musician, and I think sometimes it’s hard for him,” says Boyd. “Sometimes we’re in the studio, and he’ll play a fill, and it’s almost too technical.

“There’s like a difference in theory,” he adds. “Even though things aren’t right, sometimes they’re off in the right way. A lot of songwriting is based off of a feeling.”

That feel for what’s right is one reason the band continued working with “Harlem” producer Jake Sinclair.

“It just made sense to go back with him. We developed a relationship,” says Boyd. Following New Politics’ 2014 tour with Paramore and Fall Out Boy, the trio recorded the nose-thumbing single “Everywhere I Go” with Sinclair. “We knocked it out in two days. And everyone loved it, management, our label,” Boyd recalls.

“So when we were done with the tour, we flew out to L.A. Five of the songs we did with him, we did on tape, for the first time. Old school tape,” says Boyd. “I think it has that authentic feel. It really brings out the live show, the rawness of it.”

Boyd has fond memories of the tour, which occurred after “Harlem” began climbing the charts. It was a marked contrast to the gigging that followed the band’s debut, when the group was nearly penniless, and when a homesick Boyd and Hansen considered leaving their adopted American headquarters. “All of our success from the year before, from ‘Harlem,’ was really shining through,” remembers Boyd. “We’re on tour with two of the biggest rock acts around. We’re selling merch. And we wrote most of Vikings in the back of that bus.”

No wonder, then, that Vikings arrives as the most exuberant version yet of New Politics’ already exuberant sound, which draws on the big, bold examples of American alt-rock acts from Nirvana to the Beastie Boys.

“I think Vikings is just a reflection of some of the things we’ve been going through,” Boyd offers. “(The past year), it’s just really been a good feeling.” alt

For much more from this exclusive interview with New Politics, pick up AP 327, on sale the first week of September!