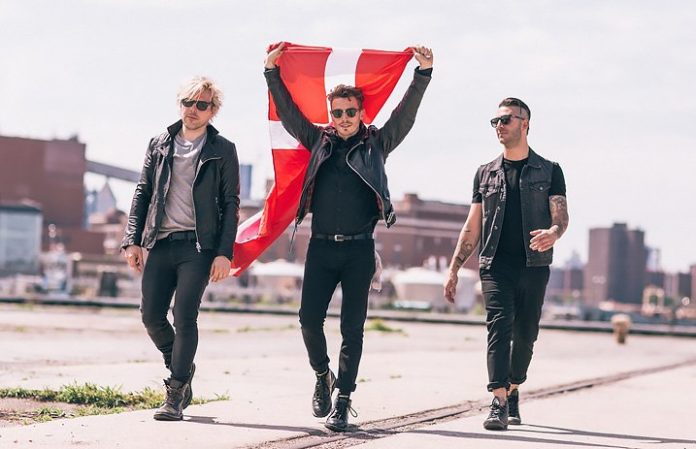 New Politics have released a bold, anthemic new single, “One Of Us.” This is the first new music since the trio’s 2015 effort Vikings and promises a dynamic future for the band.

They are signed to DCD2 records, which was founded by Pete Wentz.

“At its core, DCD2 Records has been a collective, or for better or worse a gang that has first and foremost been about inclusion. If you don't fit in anywhere else then that means you definitely belong amongst us,” said the Fall Out Boy bassist and lyricist. “I'm so stoked to be a part of sharing New Politics' 'One of Us' with the world—we can always use another anthem for the outsiders.”

We spoke to New Politics drummer Louis Vecchio about the story behind the latest song, how the rest of the album is looking and what’s the future for the band.

Read more: Our Most Anticipated alternative releases of 2017

Where did this song originate?
New Politics as a band, we came off of Vikings and Harlem, but we're in a different spot this time. Mentally, with each other—the lyrics that we were coming up with really reflected certain things that were going on, this specific vibe. “One Of Us” came about, and it resonates with me so much about things that are going on in the world today, but it wasn't written with that in mind. It written from a really good place. We're friends—we got to write this record in Brooklyn where we were living at the time. It was just a hangout session in our home studio, being together. That's what this song really [says], that we were all just together. Soren [Hansen, guitar/vocals] had this awesome piano riff that really birthed it. It all came together at a perfect time, since the lyrics just resonate so well with a lot of what's going on today. It came out excellent, so I'm really excited for the world to hear it.

The vibe was definitely like: Here we are, the three of us together, friendship, brotherhood. We were in a more relaxed, laid-back situation, while writing. There was really no pressure.

How does this song fit with the rest of the album?
It follows pretty well with the rest of the album. If I had to say something cliche, I'd say it's a very mature album for New Politics. We've definitely grown up a lot—as friends, as musicians, every way possible. That definitely reflects on this record. A lot of people think writing has to come from some deep, dark place to feel inspired. I think it was the opposite for this record: I think we were all in really good spirits and really looking forward to what was next. We were trying to progress with ourselves as a band and with musicians and it really shows. I'm so proud of this album.

You guys seem to channel that upbeat, celebratory mood throughout all of your work—how do you keep up that mentality as you write?
Don't get me wrong, there are definitely days where we get together and we're like, “I hate this.” [Laughs.] But I think it's easy for us to fall into that [positive] vibe because everything was here and at home. Like, literally—we had a studio in David and Soren's basement. [Laughs.] We did everything there. [David and Soren] are the type of artists where they'll text me at like 4 in the morning, like, “Oh, I just had the sickest idea, I can't wait for you to get here tomorrow.” [Laughs.] It's awesome.