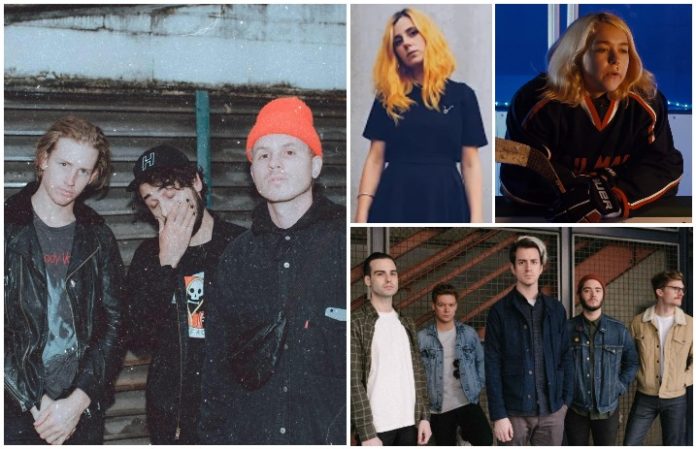 Read more: Fans trying to get Green Day’s ‘American Idiot’ to No. 1 for Trump’s UK visit

MOCKLOVE– “We Shouldn’t Play The Slave”

“We Shouldn’t Play the Slave” is an intimate look at leaving a relationship for the sake of your own mental health. It’s a story of loneliness, agency and eventual self-love. The new track is the first single following Mocklove’s debut EP It’s A Sacred Privilege to Walk Someone Home.

”Weep” is a cut from post-hardcore quintet LIMBS’ debut full-length album Father’s Son. The album, which is out now via UNFD, gives listeners a dark and brooding look at a young man’s journey out of religion as he comes to terms with both his upbringing and his own actions.

Snail Mail dropped her latest single, “Heat Wave,” taken from her anticipated debut album Lush, out June 8 on Matador Records.The video, directed by Brandon Herman, showcases the 18-year-old singer/songwriter Lindsey Jordan’s ice hockey skills, a throwback to her days on the high-school team. “I hadn’t actually been on skates since I quit the high school team junior year, so immediately jumping into shooting this was equal parts difficult and super fun,” Jordan says.

SELF DEFENSE FAMILY– “Have You Considered Punk Music”

Self Defense Family vocalist Patrick Kindlon explains that the parallels of owning a small business and making punk music aren’t as far apart as one might think with the release of their new single on Run For Cover Records. “We’ve never had the wherewithal to operate like a business. I think we got a band credit card a couple months ago, and I have no idea where it is currently. But since we started I’ve admired the bands that saw themselves as artists AND small business owners. Both require the strength to admit most people will never care the way you care. I can’t have a boss. It’s a personality defect; I recognize that. But there’s a lotta people like me out here. I thought the video for our first single off HAVE YOU CONSIDERED PUNK MUSIC was a good space to highlight a kindred spirit.”

Australian alternative rock artist AViVA just released “BRN,” a battle cry with a visceral hook that’s imagery throws back to witch burnings. As she puts it, “This is my F*ck you to anyone who dares to put me in a box.”

Alt-punk band Lost In Society announced their signing to Wiretap Records this week and will be releasing the Eager Heart EP on May 25. The first taste of the new music is the punk anthem “Creature.” The EP was recorded with Pete Steinkopf of The Bouncing Souls and will be the band’s first release with Wiretap. On the upcoming release, frontman Zach Moyle shares, “I think with this EP, I dove into some emotional and psychological channels more than the previous releases. I questioned myself and who I am as a person a lot while writing some of this record.”

Skating Polly dropped a poppy new single from their forthcoming studio album The Make It All Show, which is due out May 4 on El Camino Media. “We first wrote Hollywood Factory after I filmed a pilot for a tv show and the possibility of it getting picked up was all I could think about for a while,” says singer Kelli Mayo. “The lyrics were meant to poke fun at the idea of going to Hollywood and selling out, or at least trying to sell out if Hollywood will have you.”

YOU KNOW THE DRILL – “Snake Eyes”

This track featuring Joey Fleming of In Her Own Words premiered on Sunday’s Radio 1 Rock Show. Vocalist Yapp says “It’s a song about realizing how toxic your relationship with someone actually is and finding the strength to move on from it, realizing your worth. Due to the darker vibes, the track reminded us of In Her Own Words, so I suppose it’s why Joey Fleming fits so well on the guest vocal section.” The new single will appear on their upcoming EP, Selfhood, out June 22 via Scylla Records.

“Dirty City,” is the third single from Hot Pink Hangover’s new EP, Wasted In Space. The video is a sci-fi-meets-dayglo-noir take on a dystopian future where candy is outlawed, and only outlaws have candy.