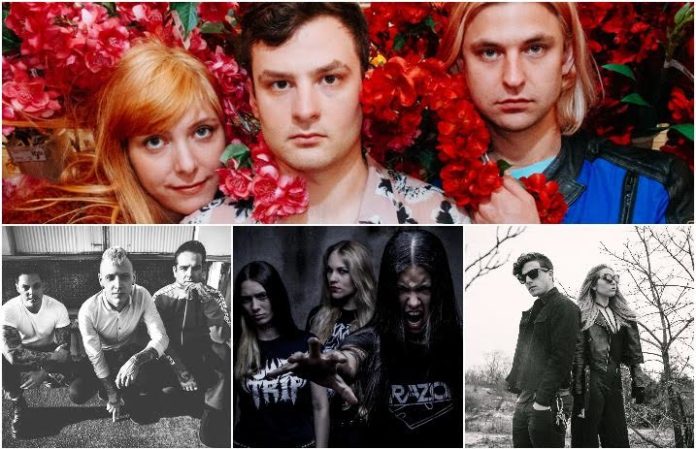 Read more: Fans trying to get Green Day’s ‘American Idiot’ to No. 1 for Trump’s UK visit

Dwellings announced their signing to Tragic Hero Records and released their new single, “Snake Charmer” this week. In addition, they revealed their debut album, Lavender Town will be released June 29. “Snake Charmer sets the mood and atmosphere we wanted to achieve on this record,” says Anthony Pacheco, one half of the duo. “It also is one of our favorite songs off of the album, and it feels good to release music again.”

Brazilian thrash commando unit NERVOSA just dropped “Kill The Silence” from their upcoming third album Downfall Of Mankind due out June 1 via Napalm Records. Guitarist/vocalist Prika Amaral says the song is about overcoming. “It talks about things that hurt you and that you’re not alone,” she shares. “This new video symbolizes a new phase in the band with which I identify myself 100 percent.” Bassist Fernanda Lira adds that the imagery of the video corresponds with the theme of the song. “Fire represents renewal and mainly purification and using it in the video really gives me the idea of triumph, overcoming and moving on,” she says.

New Jersey punk trio Lost In Society gave fans another sneak peek at their upcoming EP with the premiere of title track “Eager Heart.” On the single, frontman Zach Moyle shares, “’Eager Heart’ is basically about a sociopath taking advantage of someone. It’s dark song about control and ill intentions.”

Just days after announcing their first headlining tour of 2018, alternative rock band VISTA have released a surprise single, “Witch Hunt.” The new track is the band’s first music released since July 2017’s Long Live EP. The track was recorded, produced and mixed by Zack Odom and Kenneth Mount of ZK Productions, who previous worked with vocalist Hope Vista in 2015.

Power punk trio Sharp/Shock released the second single from their upcoming sophomore album Youth Club, “I Don’t Want A Nuclear Family.” “I realize this song might come off as ‘anti-family,’ but it really isn’t,” singer/guitarist Davey Warsop says of the song’s aim. “Ultimately, this song is ‘pro-family’—I’m tipping my hat to anyone raising kids in a non-traditional way or going against the family values that most of us are taught or pressured into, be that unmarried couples, same-sex parents, single parents, parents that live apart, or couples that are reversing the stereotypical gender roles of parenthood. I’m a supporter!” Youth Club is due out May 25 via Matt Skiba’s Heart & Skull Records—preorders are available here. You can catch Sharp/Shock on the road with Against Me! and Chris Farren this month.

GATHERERS – “Every Pain In Monochrome”

New Jersey rock band Gatherers shared “Every Pain In Monochrome,” the second single from their forthcoming album We Are Alive Beyond Repair. Pre-order the album, June 1 via Equal Vision Records, here.

Los Angeles duo outsideOUTSIDE is comprised of 18-year-old Tali and 24-year-old Kali. They recently signed to Warner Bros. Records and released “Comatose,” which is the first song off their debut EP due out this summer. Check out the new track, which offers an inside look into the struggles of addiction and trying to rise above.

San Francisco post-punks Spiritual Cramp released the first single off their upcoming LP POLICE STATE, which is due out June 8 on Deranged Records.

Seattle power-pop trio Dude York celebrated their first European gigs with an exceptionally rambunctious new single called “Moon,” which features vocals from bassist Claire England. Per the band, “Moon” is “a note to self that success doesn’t equal fulfillment and a reminder that nobody does it all by themselves.”