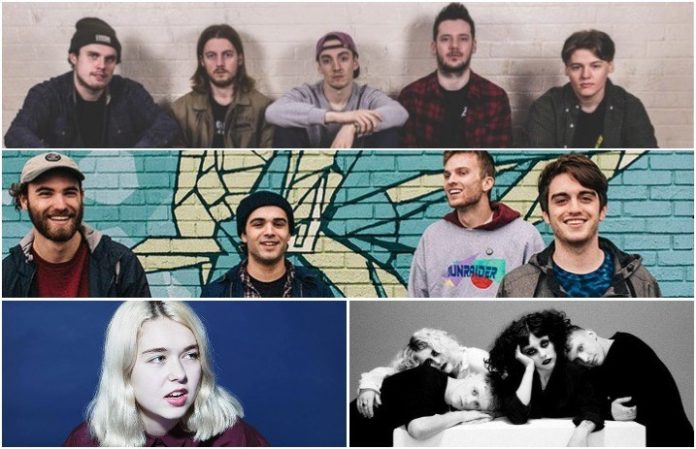 Read more: BrokeNCYDE return to remind us the world is still a terrible place

British pop-punk band Trash Boat released the official music video for their newest single, “Shade.” “Throughout my life, I’ve always found music as something that challenges me,” says vocalist Tobi Duncan. “Sometimes you hear a song that hits you so hard, it feels like it was exactly what you needed to hear at that moment. The spark could change your day and challenge you.” Their album Crown Shyness is due out July 20 via Hopeless Records.

Craig Owens, the former lead vocalist of Chiodos, released the “The Spine” under his project badXchannels.
Bonus! Here’s another track from badXchannels, “Sad Ecstatic.”

Indie outfit Lydia debuted a new song in an acoustic session with Exclaim! No Future. While the studio version of “Sunlight” has yet to be released, you can expect to see it on the band’s sixth album, Liquor out July 13 via Weekday Records. You can preorder your copy here.

Melodic punk band Save Face release a vivid music video for their latest single, “Heartache.” The track will appear on Save Face’s Merci, their first release on Epitaph. “I want someone to put these songs on while they’re having a great day the same way they can listen to it while going through a crisis,” frontman and guitarist Tyler Povanda says. You can preorder Merci here.

Having just finished a tour with Turnstile and Touché Amoré, dreamy garage-punk band, Culture Abuse dropped an energetic new track, “Bee Kind To The Bugs.” Their new album, Bay Dream is due out on June 15 via Epitaph Records—preorders are available here.

Goth-pop quartet Pale Waves just released “Kiss” via Dirty Hit / Interscope Records. The group has plans to play at Lollapalooza and  and with CHVRCHES for a leg of their August tour. You can catch them on their U.K. tour here.

After scrapping an entire album’s worth of songs, MIGHTY started to craft their debut self-titled from the ground, up. In their premiere with The Alternative, MIGHTY says that “Drip Drop” captured a meaning far deeper than what is present in the lyrics. “Drip Drop is a picture of growth and change in the seasons of life,” MIGHTY says. “That was a huge part in the writing and recording of the song, not just what it’s about.” You can preorder MIGHTY here.

Indie wunderkind Snail Mail just dropped the sweet, distinct tune “Let’s Find an Out.” Just a year out of high school, Lindsey Jordan is already dropping her debut album, Lush out on June 8 via Matador Records. You can preorder your copy here.

Seattle heavy rock outfit AVOID released the third single from their upcoming full length album, Alone. “Father Centipede” is also the fourth single released as a part of their Revival 52 campaign. “This is probably the most ‘diverse’ song we’ve ever released, and we’re so stoked to share it with you,” says vocalist Benny Scholl. “We hope that this gets you excited for the rest of the album, and we really think this gives you a good idea on how different some of these songs are going to be.”

Fullerton power-pop trio Odd Robot dropped a new single called “Sell Your Soul.” The track is from their new full length, Amnesiatic, due out August 3 on Wiretap Records.