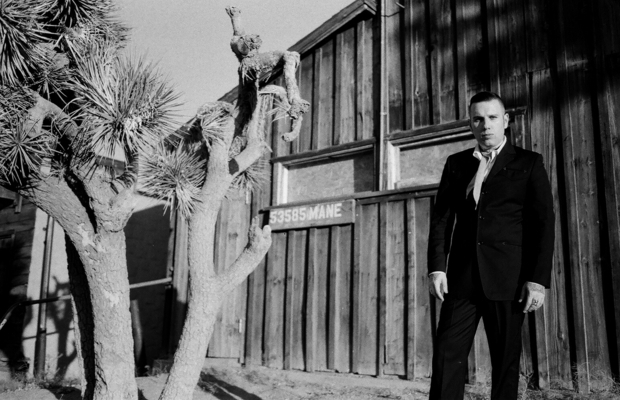 NICK 13 won’t be taking a vacation this year. The founder of American psychobilly institution Tiger Army spent the beginning of the summer on tour in support of his self-titled solo album, a roots-country record issued by Sugar Hill Records in early June. Recorded with a bevy of seasoned Nashville session players, Nick 13 finds the singer-songwriter embracing a traditional country sound that’s truer to the genre’s spirit, compared to the tidal wave of crossover-pop exercises seemingly produced by accountants. Psychobilly finheads take note: On July 30, Nick is reconvening Tiger Army—with standup bassist Geoff Kresge and drummer James Meza—to mark the band’s 15th anniversary during the OC Fair at the Pacific Amphitheatre in Costa Mesa, California. The band will also play the Marquee in Tempe, Arizona, July 31, and then Nick returns to the road beginning August 11, in support of his solo release. Nick chatted with Jason Pettigrew about the cultural differences and similarities between roots country and punk rock; how this album and tour may impact Tiger Army; and whether we should blame AC/DC and Def Leppard for the state of country music today.

It’s the total, rookie, Intro To Rock Journalism question, but screw it: How was the first leg of your solo-album tour?
It was good. It’s interesting because there are certain shows where people immediately seem to get it. Because even though Tiger Army has done songs in a country vein, the entire vibe of the show is different. It’s not loud; it’s not aggressive. There’s not a pit, so certain places I felt like the first four songs [had] the audience figuring out what exactly was happening, what should they be doing, how they should be reacting. But every show wound up being good. There were definitely a number of shows where I felt like, not quite midway through the set, everyone realized, “Oh, okay, this is what’s happening musically. I can appreciate this. Something else—i.e. some crazy-fast song—isn’t going to be happening. ” People started enjoying it for what it was, because the album had just come out and not everybody had it. I’d have to imagine that, especially in some of the smaller cities, people who were aware of Tiger Army came out for something to do, just to check it out and didn’t really know what to expect. Certainly, not all the shows were huge, and some of the places we played were pretty small, but I don’t feel like there was a bad show on the tour. I walked offstage at every show feeling like we had accomplished more or less what we had set out to do.

The current culture for country is substantially different from what you’re doing. Is there a vibrant, underground roots-country scene, similar to the culture of punk?
I can say there’s definitely a strong and vibrant underground music scene for Americana—or music that’s influenced by traditional country, music that’s not particularly rock-influenced. There are different names people give it. One of the big problems is it was always known as country music, and now the phrase “country music” means something else. So what do you call it? Americana wasn’t a musical genre I was really familiar with. I mean, I knew a lot of the music but that term—which is an attempt to reconcile the fact that what is now called “country music” isn’t the country music of the past—wasn’t something I was familiar with. There are all kinds of names for it, but what really strikes me about the underground roots-music scene is how much it’s like the underground scenes and subcultures of the ’80s that lasted into the ’90s and then seemed to disappear or are on their way out with the new millennium. It actually is a scene, and it’s composed of people who have a real passion for music. I certainly remember that growing up with punk and then even with psychobilly later in the ’90s, but if that still exists in rock, I don’t know where it is, exactly.

Are you learning everything new from this experience, whether it’s people’s expectations, touring or the culture itself? I would assume there are certain actions or ways of thinking that are considered suspect.
There are definitely a lot of differences in the culture as a whole. As far as on a honky-tonk level, it’s a lot more DIY than punk. You don’t see a lot of techs—or any techs in that world. Another thing is, a lot of times in Nashville for example, there are a bunch of honkytonks. There are enough so that each crowd can sort of have their own place. So the people who are kind of looking to be on American Idol have their sort of clubs and the few that are dedicated to the real deal can go [to theirs]. A lot of times, those bands are basically playing for tips, and there’s no cover. You can cruise in off the street and someone will literally pass a jar around every 45 minutes. It’s actually a mark of status to play a gig in Nashville where there’s a cover charge.

As a whole, there are a lot of different things that happen [in that culture]. I’ll never forget the first time I went to see George Jones. It was during the recording of Power Of Moonlight up in the Bay Area. He had people walking around prior to his set selling CDs like you would sell peanuts or hot dogs at a ball game—you pass the money up the aisle and they pass the CD down. When his band started playing, I was looking at a couple of his band members and I thought, “That guy looks familiar, where have I seen him before? Have I seen him play with someone else?” Then I realized that it was all his band members that had been walking around selling the CDs. Someone told me later that’s how [the band] get to keep a decent-sized share of the profits for what they’re hocking. But it just shows you that it is similar [to punk rock] in a lot of ways, as far as the tradition it comes from. In many cases, they’re completely different and that’s what still echoes today.

It seems there’s more of a mutual respect of the culture, the music and the community versus the whole “What’s in it for me?” type of thing.
You’re right. A lot of people are doing [this music] for the love of it. They’d be doing it whether anyone was there or not. They’re happy if anyone’s in the room who gives a shit, and that’s not something I really see in the rock world that I’ve crossed paths with. I don’t want or need to compare everything to punk, but I guess what we’re talking about, there is that sort of sense of what we’re into is not what everybody else is into in the culture at large. It’s not going to be, so we’re going to enjoy it together. That’s something I remember as a kid growing up in the underground scene, for a lack of a better description. There’s not the expectation that it’s going to be anything else—and if this is it right here in this room, that’s enough.