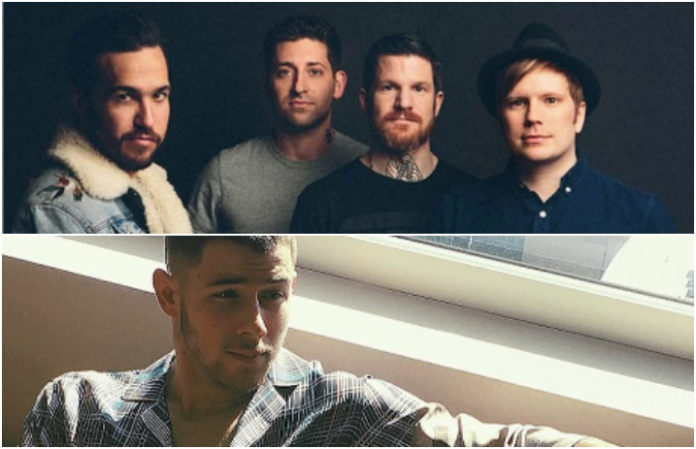 Remember when Fall Out Boy, Motion City Soundtrack, the Starting Line, Boys Night Out and Panic! At The Disco toured together in 2005? The stacked lineup traveled across the U.S. on the Nintendo Fusion Tour — aka the best tour ever.

New Jersey natives and then-up-and-coming Radio Disney-based pop-rock group the Jonas Brothers headed to the November 23 date of the tour at the Ritacco Center (now Pine Belt Arena) in Toms River, New Jersey, to check out the epic show.

The venue, which is attached to Toms River North High School, had heightened security to control and tame the sold-out crowd. But of the 3,000 fans in attendance, 13-year-old Nick Jonas ended up being an unlikely suspect of illegal activity.

“Nick Jonas is a diabetic… He was giving himself insulin and security in the bathroom freaked out and were trying to arrest him for doing drugs!” Fall Out Boy’s Pete Wentz dished in an interview with Billboard.

Checking his blood sugar and getting insulin was a new routine for Jonas, as he had just been hospitalized for, and diagnosed with, Type 1 diabetes a few weeks before the concert. His diagnosis also came right before a bunch of crucial tri-state area club-circuit gigs for the Jonas Brothers, who were working on and promoting their debut solo album It’s About Time for Columbia Records.

Although Jonas has never spoken publicly about his Nintendo Fusion Tour experience, Wentz says the two reminisced about it at a Jingle Ball event a few years back.

Chains by @nickjonas is such a jam….

Many years after his insulin incident at the concert, Jonas and the FOB guys share backstage hangs and a record label home at Island Records.