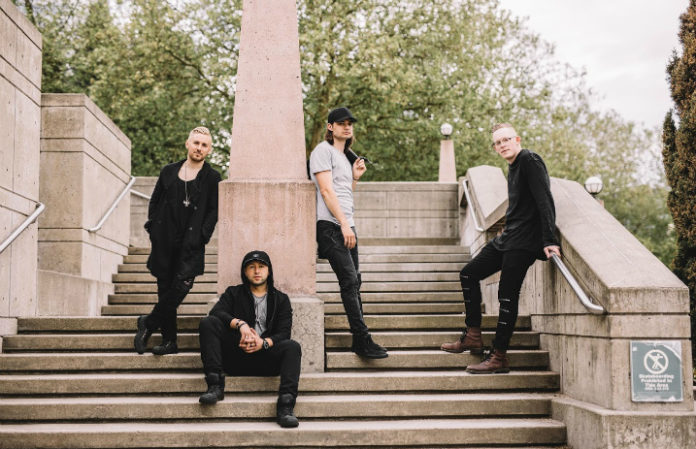 Alt-rockers Night Argent are premiering a video for the single “Dreamcatcher” off of their brand new EP The Fear—and if you're a fan of horror, this one's for you.

According to vocalist Chase Manhattan, the band designed and built the set of the video themselves. They installed the water systems with the help of some YouTube videos and filmed the video in sections in order to show the water rising up.

“When we approached coming up with the treatment for the ‘Dreamcatcher’ music video, we really wanted to shoot it as an homage to the horror genre, but with our own little twist,” vocalist Manhattan tells AP about the making of the video. “We also really wanted it to reflect not only the song, but the concept behind our new EP The Fear itself. There’s a quote by Mark Twain my dad would always share with me, that has stuck with me to this day: 'Do the thing you fear most, and the death of fear is certain.' The main message behind this video and our EP as a whole is a continuation of that: Overcome your fear; don’t let being afraid stop you from discovering what you’re truly capable of.”

Night Argent's new EP The Fear is out today via Outerloop Records. The band worked on the EP with John Feldmann (All Time Low, 5 Seconds Of Summer), and “Dreamcatcher” was written on the band's last day in the studio with the producer.

“At one point we ended up discussing how easy it is for people to let fear get in the way of their goals and their dreams,” Manhattan adds about the inspiration for the track. “It’s much easier to avoid the things you fear, like defeat or failure, than to embrace the fear and face it head on. But by facing the fear, you not only grow as an individual, but eventually you realize how pointless it is to be afraid of things as trivial as failure. People get so blinded by that fear of failure that they can no longer see the possibilities and opportunities around them. They end up getting in their own way and self-setting a limit on their potential. When we’re young, we believe we’re capable of anything and everything.

“Children are only taught to doubt themselves through the actions and words of others,” he continues. “When you go through life and you consistently have other people doubting you or telling you that what you want out of life isn’t possible, it’s hard not to start thinking that there must be some kind of truth to that, and you start dwelling on the possibility of failure, rather than focusing on improving your chances of success. After that discussion, we went back to the studio and started writing the lyrics to 'Dreamcatcher,' and the line we started with was 'Don’t make it rain, when the stars are all around you.' 'Dreamcatcher' ended up setting the tone for the rest of the EP. It led to the writing of the title track for the record, 'The Fear,' and it ended up creating a theme that we felt really tied everything on the EP together.”

What do you think of Night Argent's new video? Let us know in the comments below!