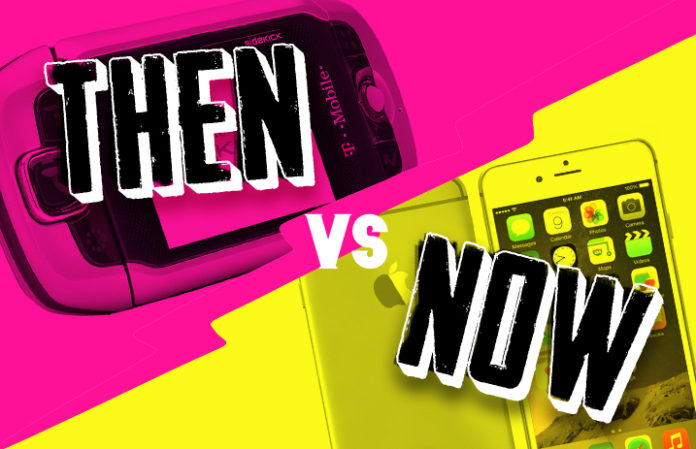 Skinny jeans and Converse (whether crisp or covered toe to heel in scribbled lyrics) still fill the pits of venues, but you’d be hard-pressed to find someone taking a picture with a Motorola Sidekick and posting it on their Myspace. The culture and components of the scene are always evolving, and while some trends hold strong, there are others that have either become nonexistent or been replaced. Head below for a then-and-now look at our scene’s culture—from technology to cringe-worthy fashion trends.

Everyone who was anyone either owned a Sidekick or wanted one—much like the always changing iPhone of today. While it may be hard to imagine, it was once super cool if your device slid up to reveal a hidden keyboard with actual buttons. However, that was back when your phone was pretty much just a phone with a few minimal perks and wasn’t a pocket-sized computer. (Of course, it didn’t hurt that they were endorsed by none other than Emo Prince Pete Wentz.)

In the mid to late 2000s, it was hard to walk the grounds of Warped Tour without seeing someone sporting a pair of bright or neon shutter shades. The Wayfarer frame has now taken its place, whether purchased from Ray-Ban, a dollar store or a merch booth with your favorite band’s logo plastered on the sides.

Before Myspace’s borderline extinction, trying to garner as many friends as possible on the social networking site was definitely a favorite pastime, with people hoping to be as popular as Myspace celebrities Kiki Kannibal, Jeffree Star or Audrey Kitching. Nowadays, that same yearning for recognition can be seen on YouTube in the drive to land more subscribers and views. And just like some of their Myspace predecessors, favorites like Damon Fizzy and Jordan Sweeto have even been invited on Warped Tour.

Back in the day, jelly bracelets were like second sleeves, lining arms in myriad colors. Rubber bracelets began to take over thanks to the likes of Jac Vanek’s sassy one-liners and collaborations with bands such as Cobra Starship, the Summer Set, the Cab, the Academy Is… and All Time Low. Vanek may have moved beyond the rubber and expanded her quips to other accessories and clothing, but those bracelets can still be spotted as merch for bands such as Twenty One Pilots and Sleeping With Sirens.

Trimming your playlists down to fit onto one burned CD for the drive to school or a show was almost as stressful as straightening your hair or making sure your eyeliner was as thick as possible. That’s now a thing of the past thanks to the ease of creating and sharing playlists on streaming services such as Spotify and Apple Music. You may not be able to decorate it with Sharpies before handing it off to a friend, but the ability to fit more than 15 tracks is definitely a perk.

Livejournal was your go-to for venting your feelings on your own page, your favorite bands’ pages or community pages launched to chat about said artists. Similarly, Xanga was many teens’ first taste of blogging and HTML exploration through customizing layouts. Each have since been replaced with Reddit’s threads and “Ask Me Anything” posts, or Tumblr’s and original content production and reblogging.

Before everyone had cellphones with the convenience of built-in cameras, the only way to capture your selfies (or shameless mirror pics) and adventures was with a disposable or point-and-shoot digital camera. The blinding flash was always a great indicator of how much Windex your bathroom desperately needed.

The perfectly angled photo wasn’t actually perfect until it was over-edited with a saturation increase and high level of contrast to give your selfie that ghost-like stare. The amateur edits have since been replaced with the clearly more professional Instagram filters and similar editing app options of VSCO and Afterlight. No photo is complete for posting without that artsy touch.

Before bands, public figures and everyday people were using Periscope to stream live straight to your smartphone, there was Stickam. Launched in 2005, the service was the first of its kind, allowing anyone from Taking Back Sunday to Underoath to go live, or for viewers to contribute through a chat screen or optional multi-person video sidebar. Ustream later surfaced in 2007 and also gained traction, but neither has held up to the changing market with Stickam folding in 2013 and Ustream overshadowed by the Twitter-owned Periscope and the introduction of live streaming options on YouTube and Facebook.